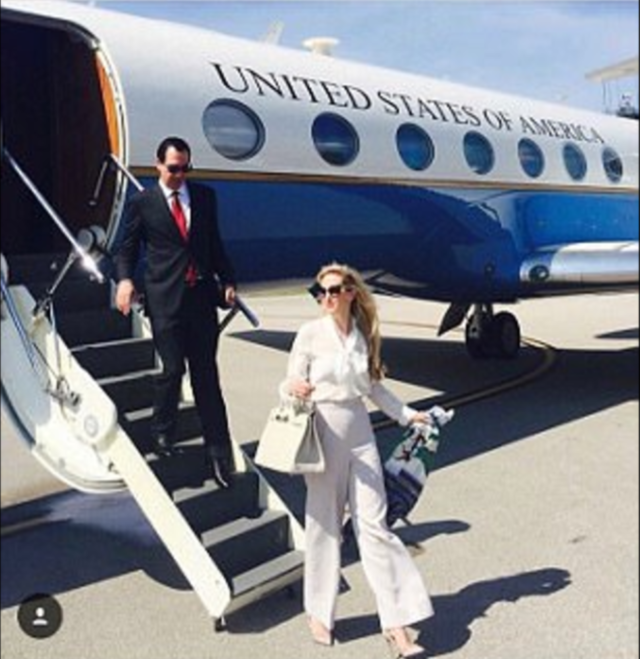 Louise Linton, the new wife of Secretary of the Treasury Steven Mnuchin, wrote a comment on her Instagram account, which since set to private, but not before it was screen-grabbed, as it usually happens.

Linton, a 36-year-old Scottish actress, who married Mnuchin, 54, in June, posted a photo of her and her husband as they walked off a military jet Monday. The Washington Post reports that Mnuchin’s use of a government plane was unusual. Officials typically fly domestic carriers. According to Bloomberg Mnuchin and Linton were in Kentucky to tour Fort Knox, which holds the federal government’s $200 billion gold reserves. The couple visited Kentucky for Mnuchin’s appeal to Congress to overhaul the tax code. Democrats have claimed will result in deep tax cuts to the wealthy.

No wonder Jenni Miller, Democrat, 45, and mother of three from Portland, Oregon, snapped back a cynical reminder of using tax dollars to pay for her “little getaway.”

The reply was embarrassing low:

“Aw!!! Did you think this was a personal trip?! Adorable! Do you think the US govt paid for our honeymoon or personal travel?! Lololol. Have you given more to the economy than me and my husband? Either as an individual earner in taxes OR in self sacrifice to your country? I’m pretty sure we paid more taxes toward our day “trip” than you did. Pretty sure the amount we sacrifice per year is a lot more than you’d be willing to sacrifice if the choice was yours.”

Miller told the New York Times that she was taken aback by Linton’s behavior.

“If she hadn’t made her account private, I would have written back with a very snide Marie Antoinette joke,” Miller said. She added she didn’t understand why Linton had to share the brands she wore when visiting a state with a high poverty level.

“I think my post was just five or six words, and she had to go on basically a rant about it to make herself look more important and look smarter, better, richer — all those things,” Miller said.

In Britain, this Rich Twats Of Instagram troll by repellent Louise Linton Mnuchin forever marks her as lowest of the low class. pic.twitter.com/LKyO8sEyU7

But that was not all. Miller posted a new comment saying:

‘Apparently I offended this deplorable girl I had never heard of until today,’ she wrote alongside a screenshot of a June article titled ‘A “white savior” memoirist widely mocked in Africa has married Trump’s treasury secretary.’

‘According to my 20 second Google search, she’s an aspiring Penthouse model who married an old rich guy in a wedding officiated by a homophobe and attended by other couples of similar age and beauty gaps,’ Miller continued.

‘She says she’s a nice person. I doubt it. There weren’t any Nazi sympathizers at my wedding. #byelouise’ 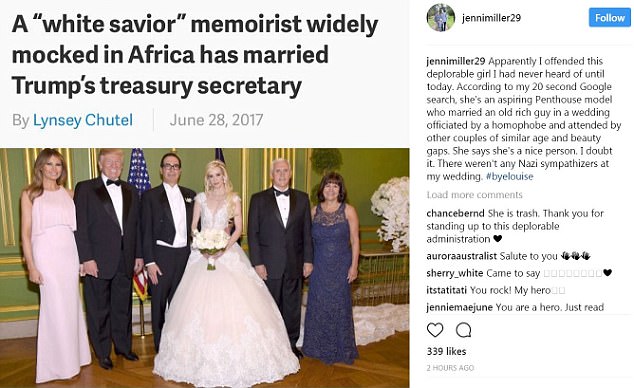 A spokesperson for US Treasury Department told the New York Times that Linton had not been sponsored by any of the brands she hashtagged and that the Mnuchin reimbursed the government for the #daytrip.

Linton mocked before on social media with accusations of outright lying when she released in 2016 the book ‘In Congo’s Shadow: One Girl’s Perilous Journey to the Heart of Africa’. The book which under pressure withdrew from sale, detailed her time as a student in Zambia and as “white savior.”  Linton pledged to give any proceeds from the book to charity.

Linton grew up in Melville Castle which is owned by her family. 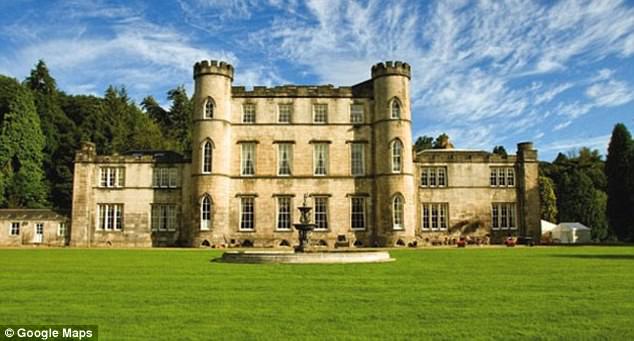