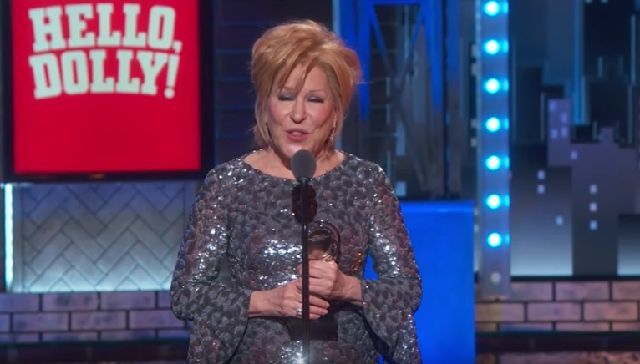 Bette Midler took home her first Best Actress award in 43 years, for her role in the Musical Hello, Dolly! At 2017 Tony Awards.

The ceremony, Sunday night at New York’s iconic Radio Music Hall, was an event Divine Miss M’s had waited since she started acting in 1967. And she had a lot of people to thank.

“I can’t remember when I had so much smoke blown up my arse. It’s full. This is it. It’s the icing on the cake!” she said in an acceptance speech. Bette refused to leave the stage.

The statement and the list went on so long even the usual “get off the stage music” started. Midler shouted over the music “Shut that crap off.” The music stopped immediately.

Then she said: “I just want to say that ‘revival’ is an interesting word. It means something was near death and brought back to life. Hello, Dolly! never really went away. It’s in our DNA. It’s optimism. It’s democracy. It’s color. It’s hilarity. Come and see it. It’s not just me. This thing can lift your spirits in these terrible times.”

Bette Midler ended her speech by giving her thanks to the Broadway divas across history. As Midler finally left the stage, the crowd rose in a standing ovation.