Qatar Airways in deep trouble. Amidst the announcement Monday by Saudi Arabia, Bahrain, the United Arab Emirates and Egypt of cutting ties with Qatar, the friendly neighbors of yesterday have also closed their airspace for flights between their countries and the State of Qatar.

In the next hours after the various bans announced, there was confusion regarding the exact meaning and implementation of airspace closure.

Qatar has little sky; Bahrain airspace mainly surrounds it. On the South Saudi Arabia and the UAE is sharing its Eastern border.

Losing Bahrain airspace would be worst since it practically encircles Qatar.

Bahrain and the UAE can’t legally shut off its airspace to Qatar.  As signatories to the International Air Services Transit Agreement, they have legal restrictions. Saudi Arabia is not an ISTA member country and can legally shut Qatar’ carrier out of its airspace.

Qatar Airways which has grown over the past two decades to become the best airline in the world for 2015, according to consumer aviation website Skytrax, would effectively be ground. 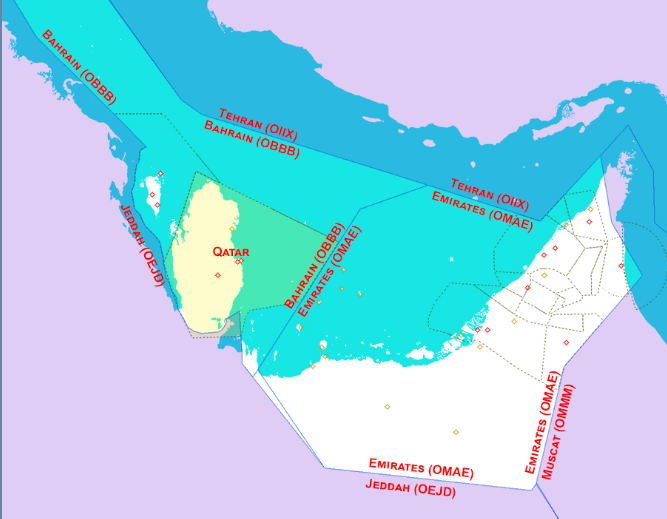 According to Center for Aviation (CAPA), Qatar Airways has more flights to the four countries than all other airlines combined.

Qatar Airways has a larger presence in Bahrain, Egypt, Saudi Arabia, and the UAE than airlines from those countries have in Qatar.

Saudi and the UAE are Qatar Airways’ two single largest markets – bigger than even India.

“Qatar Airways may find it has few friends among its neighbors during the turmoil, but competitors would be unwise to assume Qatar’s growth story faces a slowdown.”