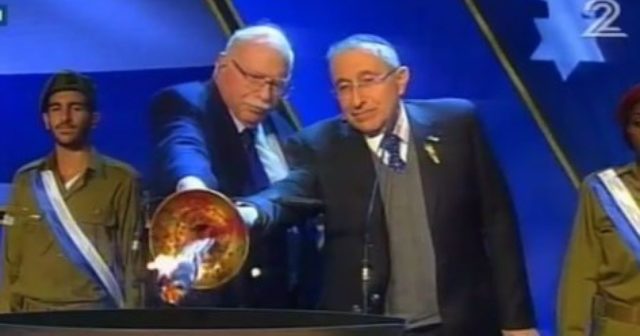 The Israeli government and Culture Minister Miri Regev did the right thing in dedicating one Independence Day torch to representatives of the Jewish people, and in selecting two American Jews—Rabbi Marvin Hier and Michael Steinhardt—to light it. The criticism voiced by many Israelis, that there is no room for representatives of the Jewish Diaspora in an official state ceremony, is not only outrageous and irritating but also points to the ignorance of those taking the name of Zionism in vain.

Their assertion that the Israeli story of independence is a story about the state’s success rather than about the Diaspora’s success has absolutely no historical truth to it. It’s amazing to see how the one-dimensional Zionist narrative has prevailed in Israeli society’s public domain, gaining ground even among those who see themselves as enlightened and knowledgeable people.

An examination of the US Jewry’s involvement in the Jewish Yishuv in the Land of Israel and in the State of Israel reveals continuous activity spanning over many years. The North American Jewry’s influence on the Jewish Yishuv and on the Israeli society can be seen everywhere: Land purchases, development of social services and health services, education, culture, arts and sports, the status of women, civil equality, renewal and Jewish pluralism and an Israeli lobby around the world.

It should be noted that US Jews never shut themselves up within their own world, and they considered themselves responsible for the fate and well-being of the Jewish people in general and of the Jews in the State of Israel in particular.

From WWI to this day

The World War I era was the US Jewry’s finest hour. The Ottomans deported and exiled many of the Land of Israel Jews to Egypt, others were forced to join the Ottoman army, rural Jewish settlements were plundered and many suffered from hunger and died of diseases. The Jewish Yishuv was on the verge of collapsing. If it were not for the help that the Land of Israel Jews received from the US Jewry, it’s highly unlikely that the Zionist enterprise would have survived the war, and 32 years of Zionist activity would have gone down the drain.

The American Jewish Joint Distribution Committee (“The Joint”), which was founded in 1914—and later played an important role in the story of Israel’s establishment—enlisted to rebuild the Yishuv in the years after the war: It helped orphans and widows, restored ruined infrastructures, infused funds and made the absorption of the hundreds of thousands of Jews who immigrated to Israel after the war possible. The contribution of the women of Hadassah to the residents’ health and welfare services was invaluable too.

Many Israelis (both Jews and Arabs) are aided on a daily basis through the medical infrastructure laid by the Hadassah organization since 1912. The operations that brought Yemeni Jews to the State of Israel in the 1950s (Operation Magic Carpet) and Ethiopian Jews in the 1980s would not have succeeded without the help of the Joint and the United Jewish Appeal (UJA). The funds of the UJA, which was founded in 1939, helped the Jews who survived the Holocaust in Europe, helped organize the immigration to the Land of Israel after World War II, establish of agricultural communities and development towns and create educational, cultural and professional training centers.

The Israeli society has failed to sufficiently acknowledge the importance of the Jewish American activity for the Jews of the Land of Israel. The state’s establishment is perceived by many as a local success story of the Jews who immigrated to Israel and settled there. They purchased lands, drained swamps, established communities and built infrastructures, protected their property on their own and put down roots in their historic homeland.

But the Zionist success story is much more complicated and should be seen as a project of the entire Jewish people—not just of the Jews living in Israel. The US Jewry was and remains a crucial factor in the success of the Zionist enterprise, and its story should be shared with the general public. The Israeli society should know how this community rushed to help the State of Israel at its inception and at difficult times, and how committed it is to the state.

The support and the help did not only come from wealthy Jews, but also from members of the working class and the middle class, who donated from the little that they had to the Land of Israel Jews. They immigrated to the United States in great poverty, slowly climbed up the social-economic ladder, gradually integrated into the American society and were absorbed in it. Despite their successful absorption, they did not forget their brethren in the Land of Israel. Out of sincere concern and consideration, they repeatedly answered calls from the state’s leaders to help Israel in bad times and in good times. I doubt the State of Israel would have reached such impressive achievements at such a short period of time if it were not for the US Jewry ’s support.

A liberal alternative to Judaism

Their contribution to the State of Israel is not reflected in material aspects only. A progressive, pluralistic and liberal Judaism developed in the US. Israelis who grew up under the intolerant watchful eye of the Israeli Orthodoxy were unfamiliar with a different kind of Judaism like the American Jews embraced—an open and accepting Judaism, which allows secular to approach it too without being afraid.

This Judaism infiltrated the Israeli society as well, opening its doors to those who wished to get away from the women-excluding, strict and conservative Orthodox system. The US Jewry’ educational activity within the Israeli society presented an appropriate and brave alternative.

Instead of seeing the State of Israel as a joint project of many Jews and being grateful for their help, there is always someone who stands up and lashes out at the North American Jewry, which repeatedly fails to understand why Israelis are hostile towards it and are trying to hide its contribution and activity for the Israeli state and society.

The 21st-century model of the “Israeli Sabra” is coarse and prickly on the outside, with no sweetness whatsoever on the inside. The arrogance, and mainly ignorance, of Israelis when it comes to Diaspora Jews in general and to US S Jewry in particular makes them drift away from the State of Israel and harms the mutual partnership and the solidarity, which are an interest shared both by those sitting in Zion and those outside of Zion.

In this article:Israel, Finance, Zionism