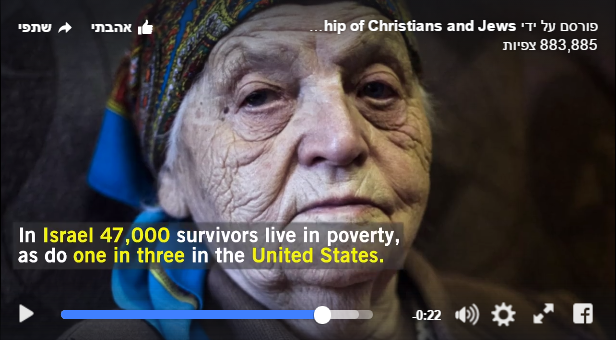 Since last Wednesday, the Facebook video “forgotten survivors”, has been viewed some 880,000 times and shared more than 6,500 times. The video is part of a new campaign by The Fellowship to draw attention to the world’s poorest Holocaust survivors, largely in Israel and the former Soviet Union (FSU).

The campaign launched just as Israel’s state comptroller issued a blistering report criticizing the Israeli government for failing to address the needs of Israel’s poorest survivors.

The campaign, called “We Remember, We Act” is seeking to change how Jews and others commemorate Holocaust Remembrance Day by urging people to move from memory to action to aid the world’s poorest survivors in their final days.

“We must move quickly from memory to action to provide a measure of dignity to these Holocaust victims who are living their last days in crippling poverty,” said The Fellowship’s founder and president, Rabbi Yechiel Eckstein. “We must remember the past. But we also must act now.”

The campaign seeks to raise $15 million for each of the next five years to help the poorest survivors, in Israel and the FSU. Business leader and philanthropist Haim Saban announced he was donating $1 million to the effort as well.

While Israeli Holocaust survivors receive some government subsidies, as well as reparations grants from Germany and Swiss banks, one-fourth of them still report being unable to afford sufficient medicine, medical care, food or home heating fuel in the winter.

In the FSU, the situation is much worse with the cost of living rapidly rising in recent years, the economy falling, and no social safety net.

Complicating the survivor crisis is that many of the elderly Jews in the FSU directly experienced the Holocaust, having either fought against or evaded the Nazis on the eastern front – but because they were not in German concentration camps or ghettoes are not considered Holocaust survivors in the strictest sense and, as a result, do not receive aid from the Claims Conference or Swiss banks.

But The Fellowship says that more than 150,000 other Holocaust survivors and refugees in the FSU are not being reached at all, because of a lack of funds from the American-Jewish community.

“Of course it’s profoundly important that we remember and memorialize the past. But we must also fulfill our moral obligation to the dwindling number of survivors who are living in the most unspeakable poverty,” Eckstein said.

“We must do whatever we can, while we still can, to bring compassion to those who endured one of the most horrific periods in our history. Sadly we are not. Instead of giving tens of millions of dollars for Shoah museums, testimonial libraries and the like, we ought to also focus on helping provide for these desperately poor Jews in the few years they are still alive.”

Eckstein added: “This is a crisis situation. We need to act urgently. Now!”

Video Credit: Courtesy of the International Fellowship of Christians and Jews.