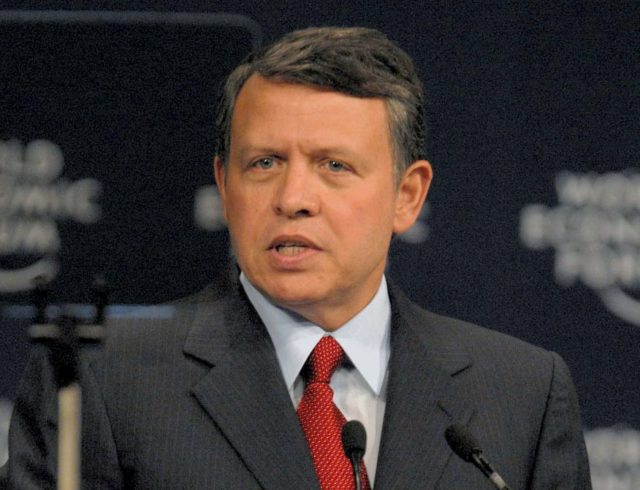 The Arab summit opened in Jordan, beside the Dead Sea, on Wednesday with a call to protect occupied Jerusalem from Israeli designs.

In his speech, Jordan’s King Abdullah said Middle East peace would not be attained without the creation of a Palestinian state under a two-state solution that would be the basis of a comprehensive Arab-Israeli peace deal.

Jordan’s King Abdullah accused Israel of wrecking the chances of peace by accelerating settlement building in disputed territory in the West Bank and east Jerusalem.

“Israel is continuing to expand settlements and wreck chances of Middle East peace … There is no peace or stability in the region without a just and comprehensive solution to the Palestinian cause through a two-state solution,” the king said.

The two-day Arab League Summit is expected to discuss the issues including the ongoing conflict in Syria and Yemen, threats of terrorists groups and relations with Iran.

Syrian President Bashar Al Assad was the only Arab leader who was not invited to participate in the Arab summit. Syria’s suspension from the 22-member Arab League in 2011 following his brutal civil war.

King Abdullah, who custodianship over Muslim holy sites in Jerusalem, said any “unilateral” Israeli move to change the “status quo” in the Dome of the Rock and the Aqsa mosque would have “catastrophic” consequences on the future of the region, inflaming Muslim sentiment, according to Reuters.

Palestinian President Mahmoud Abbas said he expected the Arab League to give full backing to the Palestinian positions and to deliver a “clear message to the world about Palestinian rights.”

The leaders were expected to reaffirm a 2002 Arab peace plan that offers Israel normalization with dozens of Arab and Muslim countries if it cedes the war-won lands for the creation of a Palestinian state.

This would undercut Israel’s proposal of a regional peace in which normalization with some Arab countries would precede a deal with the Palestinians. Abbas objects to reopening the Arab plan to negotiations, fearing it would further weaken the Palestinian position vis-a-vis Israel.

The Palestinians and Arabs want east Jerusalem—which Israel captured in the 1967 Six-Day War and later annexed in a move not recognized internationally—as the capital of a future state encompassing the West Bank and the Gaza Strip.

The Palestinian quest for independence also served as a showcase for Arab unity in a fractured region, where leaders find themselves on opposite sides of long-running conflicts, particularly Syria’s six-year-old civil war.

The 21 kings, presidents and top officials gathered on the Jordanian side of the Dead Sea, with a clear view of the West Bank on the opposite shore.

The Arab summit was to adopt a series of resolutions, several dealing with the Palestinian issue. The statements, subject to last-minute change, were previously endorsed by Arab foreign ministers.

The draft resolutions condemn Israeli policies, including settlement construction, that are “aimed at eliminating the two-state solution and replacing it with apartheid.”

They also warned against moving diplomatic missions to contested Jerusalem. Trump has said he would move the US Embassy in Israel to Jerusalem, but relocation no longer appears imminent.