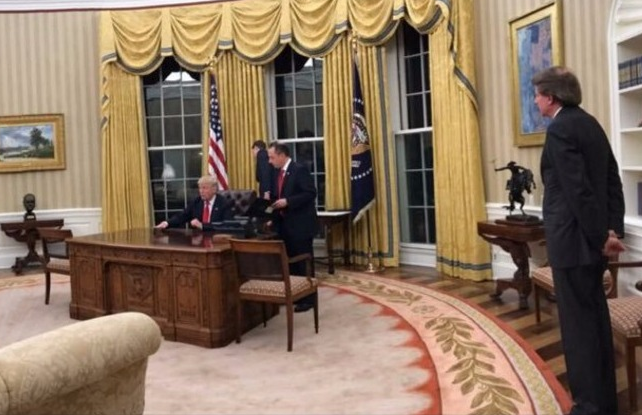 Just before her show was set to air Rachel Maddow, MSNBC, tweeted a sensation news:  We’ve got Trump tax returns

In a Tuesday statement The White House said that President Donald Trump had paid $38 million in taxes on income of more than $150 million for 2005.

Maddow revealed that Trump reported over $150 million in income in 2005 and paid $5.3 million in federal income tax and $31 million in alternative minimum tax.

In total, US President Donald Trump earned $153 million and paid $36.5 million in income taxes in 2005, paying a roughly 25 percent effective tax rate thanks to a tax he has since sought to eliminate. This figure well above the roughly 10 percent the average American taxpayer forks over each year, but below the 27.4 percent that taxpayers earning 1 million dollars a year average, according to data from the Congressional Joint Committee on Taxation, According to AP.

The pages from Trump’s federal tax return show that he also reported a loss of $103 million that year. No details revealed.

According to Johnston Trump, himself, had sent him the document. Johnston emphasized that Trump used breached to ensure a deduction income tax rate. He said that he believed the rest of the returns would show something that Trump may be trying to hide.

In respond the White House has claimed that the network is “desperate for ratings” and “violating a law to push a story.” The unauthorized release or publishing of federal tax returns is a criminal offense, punishable by a fine of up to $5,000 and up to five years in jail. Maddow said the First Amendment gave her the right to discuss the returns.

“The dishonest media can continue to make this part of their agenda, while the President will focus on his, which includes tax reform that will benefit all Americans,” the White House statement continued.