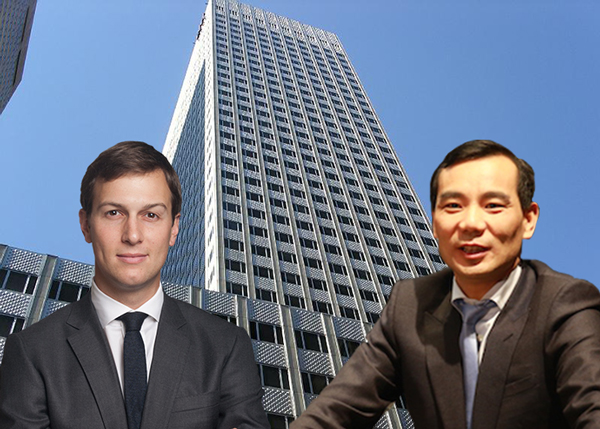 The Kushners stands to receive more than $400 million from a prominent Chinese company, Anbang Insurance Group, that is investing in the Family’s marquee Manhattan office tower at 666 Fifth Avenue.

Bloomberg reports that Anbang plans to strike a $4 billion deal to invest in Kushner Companies’ office tower. The deal include “terms that some real estate experts consider unusually favorable for the Kushners,” Bloomberg said, including “both a sizable cash payout… for a property that has struggled financially and an equity stake in a new partnership.”

According to Bloomberg, documents sent out to prospective investors claim the finished building will be worth $7.2 billion. While the GM Building, long considered the most valuable office tower in the U.S., is valued at just $3.4 billion.

After the deal, the company owned by the family of Jared Kushner, President Donald Trump’s son-in-law and senior adviser, would value the 41-story tower at $2.85 billion, Bloomberg points out is the most ever for a single Manhattan building. The new partnership will refinance $1.15 billion in existing mortgage debt. Under the terms of the deal, the Kushners will be able to retire the debt by paying off just $50 million, or 20 percent, of what they owe.

“At the very least, this raises serious questions about the appearance of a conflict that arises from the possibility that the Kushners are getting a sweetheart deal,” Larry Noble, general counsel at the Campaign Legal Center, tells Bloomberg. “A classic way you influence people is by financially helping their family.”

The Real Deal mentioned that Kushner bought the building for a record $1.8 billion in 2007, but almost lost the property in the wake of the global financial crisis before Vornado jumped in with much-needed capital.