A list of “The Seven Craziest Leaders in the World” was published at the regional German daily newspaper Hamburger Morgenpost. The Ministry of Foreign Affairs expressed its anger that the list included Prime Minister Benjamin Netanyahu.

The text accompanying Netanyahu’s picture says that he is promoting settlement policies and that he tried to convince former US President Barack Obama to attack Iran makes him entitled to be among the craziest leaders. 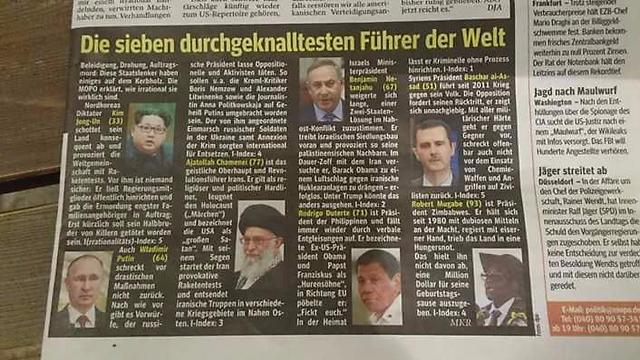 Hamburger Morgenpost has left-wing editorial positions. Two years ago, it published a caricature of the Islamic religious figure Mohammed.

The Israeli Embassy in Germany criticized the paper: “The fact that they put an elected prime minister of a democratic Western country, which has been fighting for its life since its founding, alongside some of the worst dictators in the world, reveals more than anything the newspaper’s level of understanding of what is happening today in the world, or something much worst, which was already supposed to have disappeared from the world: anti-Semitism.”

Following Israeli and internal German objections, the newspaper apologized for including Israel’s prime minister in the list. “Including Netanyahu in a the list was a mistake, and we apologize for it,” the newspaper announced on Saturday night.