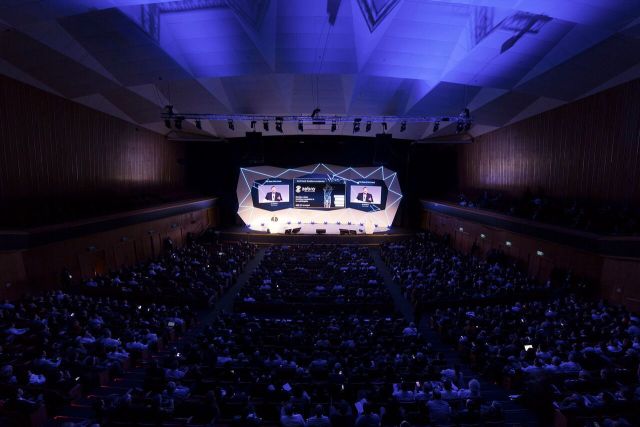 Israel’s OurCrowd, a global equity crowdfunding platform, hosted its third annual summit on Thursday in Israel, the Startup Nation. Since its inception, the OurCrowd Global Investor Summit has doubled in size every year.

The international nature of the conference was a testament to the failure of the Boycott, Divest and Sanctions movement (BDS) which seeks to isolate Israel. It purports to be a political movement intended to help the Palestinians, but that’s really just another excuse for Israel haters to bash the country. While a few musicians have cancelled planned concerts there over the years, the BDS is clearly a failure. If you were at the OurCrowd summit then you know why.

The summit was held this year at the ICC Jerusalem International Convention Center, also known as Binyanei Haumah. The first event two years ago was held in a hotel. Last year it was held in the new annex to ICC Jerusalem, which is a smaller facility. This year’s conference was held in the main building and attendees filled its hall. At this rate it will soon need to be held in Yankee Stadium.

There were an estimated 6,000 guests from 82 different countries in attendance. In addition to all of the people from the OurCrowd companies and OurCrowd staffers themselves, the event was packed with venture capitalists, strategic investors (also known as angel investors), aspiring entrepreneurs, job seekers and people just looking to network.

Outside the main hall there were smaller gatherings held all day long where various business deals were made. Many businesses and banks were represented there at booths throughout the convention hall. In spite of the very loud pleas for everyone to go inside for the main plenum, many people continued to meet with the people at the different business stands. 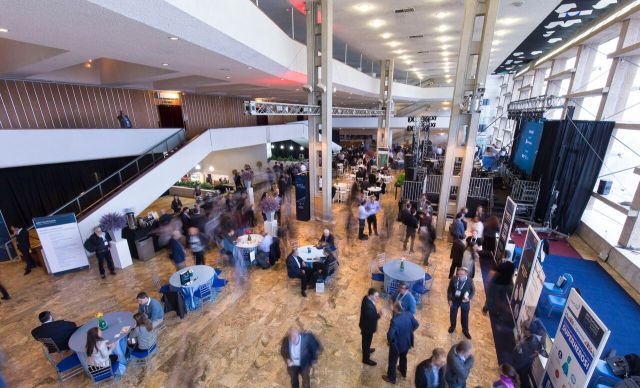 Sponsors included the above firms as well as El Al, KPMG and Bloomberg Media.

You will certainly be able to find plenty of stories out there about the deals which were made at the summit, how big a success it was and all about how OurCrowd has grown. But I went there to learn about new Israeli companies and to meet all of the people who came from around the world to Jerusalem for a business convention; in spite of the fact that so many out there call on these very people to boycott the country.

As packed as it was, I still ran into plenty of the usual faces that I seem to see at every one of these kinds of business conferences held in Israel. I also ran into some old friends who I had not seen in years including a member of my class from business school who was just there to network and a dentist who I know who also has his own microbrewery.

But a significant share of the participants not only came in from abroad, but were not affiliated with OurCrowd.

So why did all of these people come to Israel?

Well the country has been nicknamed Startup Nation, in part, because of the 2009 book by that name written by Dan Senor and Saul Singer. The authors believe that the primary reason why Israel has become the world’s center for high tech innovation and an entrepreneurial spirit is its military. Specifically, the Israel Defense Forces has a highly trained high tech unit called 8200 which operates its cyber-security and manages the IDF computer systems.

In order to get into the unit the soldiers must already have a strong computer background and it offers them further training and experience. Its veterans are sought after by high tech firms and having service in 8200 on your resume pretty much guarantees a successful career in the industry.

Israeli startups are filled with graduates of 8200 and they comprise the movers behind some of the OurCrowd startups.

Of the 6,000 participants, there were venture capitalists and entrepreneurs from all over the world including India, Greece, Singapore, Nepal, South Africa, Australia, China, South America, Great Britain, Germany, Russia, South Korea and of course the United States.

When asked the question of “why Israel,” participants pretty much had the same answer time and again with only slight variations. It went something like this: “Israel has the world’s most successful high tech sector and its best innovators.” And, “there is no better place in the world to go to if you want to learn more about innovation. We came here to learn how to apply the Israeli success story in our country.”

And no one seemed to be concerned about the security situation nor the politics of the current Arab-Israel conflict. In spite of the way in which the world press portrays a negative view of the country among the world’s population because of the plight of the Palestinians and all of the U.N. sanctions against it, international attendees at the OurCrowd summit said that they see no such anti-Israel sentiment in their communities back home.

In fact, there were so many on the record quotes given which contradict the supposed negative view of Israel around the world portrayed in the media that to site them here would fill up the entire internet. OK that’s an exaggeration, but you get the point.

So what did people say? 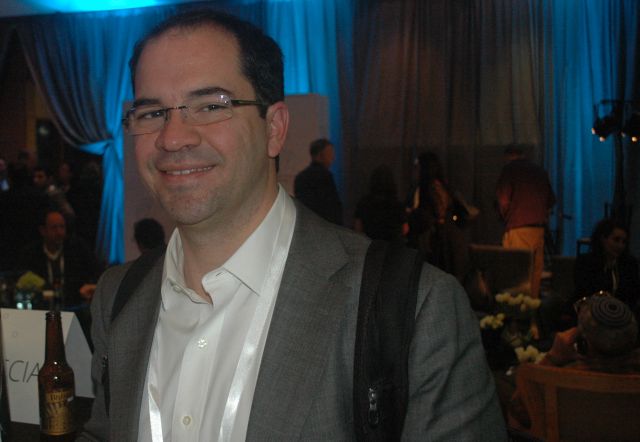 Ion Tsakonas, the CEO of Piraeus Equity Partners, and PJ Tech Catalyst Fund (seed stage), came in from Greece. These funds invest in equity or convertible debt issued by companies with a legal presence in Greece.

He made four trips to Israel in the past two years. Ion wanted to get new ideas on tech trends and investments.

About the OurCrowd summit Ion said that it was, “Very exciting, very productive, and has offered me lots of insights.”

“Tech, it’s in their DNA. Israel means tech. Israel is definitely a regional center,” Ion Tsakonas explained when asked the question of “why Israel.” About the politics and groups like BDS he said, “It would be nice if there weren’t any political or security issues, but it doesn’t affect the business relationship.”

Mun Hon Hooi and Pauline Sim came in from Singapore and staffed their organization’s booth.

They work for the bank UOB Group which was incorporated on 6 August 1935 as the United Chinese Bank. It is now a leading bank in Asia. The UOB Group has a network of more than 500 offices in 19 countries and territories in Asia Pacific, Western Europe and North America.

Their representatives at the summit had no qualms about doing business in Israel. “It goes back to our roots as a commercial bank,” said Hun Hooi. “We want to be a part of economic growth in Asia. OurCrowd has a very strong model and they have good traction.” 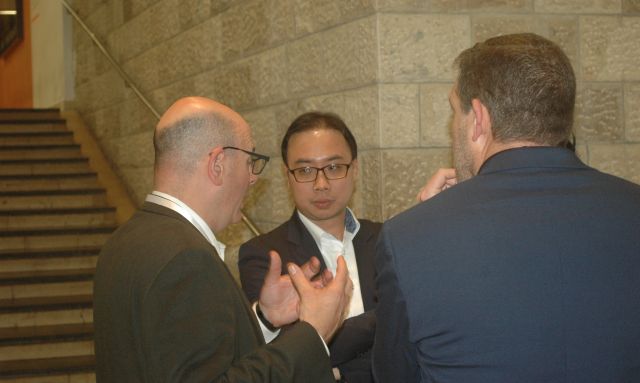 Pauline said, “We only came here to Israel because of OurCrowd. We heard about the tech scene and the innovation.”

As for all the political issues, the two explained that Singapore and Israel have very close business ties today and that they saw the event as a great opportunity to network and to learn about other startups. 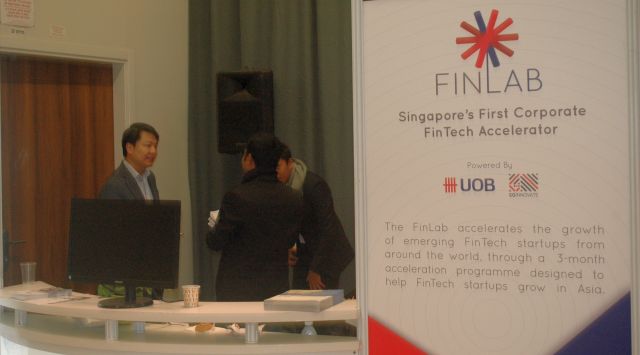 Ashish Taneja came in from India and said pretty much the same thing. Ashish is the managing director of growX ventures an early-stage investment firm based out of New Delhi.

The sharply dressed investor spoke to me in the executive lounge. This was a large room furnished with some comfortable couches and recliners. No one seemed to notice when I strolled inside, in spite of the fact that that I did not wear a suit and am far from being big money. At the Jewish Federations event in the same location and the same room three years ago I was denied entry. Oh well.

Then there were the British. One would think that they really don’t like Israel judging from how it is a hotbed for the BDS. But apparently Roger Waters is not really in step with his fellow Brits.

Claire Barrington Jones and Samantha Lilley represented Borro, a London based luxury asset lender. In short, borro lets people in need of medium sized loans use items like expensive works of art or a collection of Rolexes as collateral. The company has raised funds with the help of OurCrowd for two years. So OurCowd does not just deal with Israeli startups nor with the high tech sector exclusively. Borro has already lent out $250 million.

Claire is the VP of sales and has been with the company for five years. She was not afraid of coming to Israel. “In the world we live in now there are risks everywhere,” she said. “Just going on the Underground in England can be a danger.”

She had never been to Israel before and had previously been all over the Middle East including Turkey, Egypt, Morocco, Abu Dhabi and Dubai. “I definitely do not have a bad impression of Israel,” she said.

Hmmmm? And yet some celebrities like Elvis Costello and Danny Glover would have people believe that all of the Europeans hate Israel and the American government only supports it because of the lobbying by American Jews.

If any of these people really bothered to speak to the average person outside of their famous people bubbles then maybe they would understand that if what they believed were just half true then the OurCrowd Summit would have been held in the same hotel for all three years.

One thing that is undeniable, however, is that OurCrowd certainly knows how to put on a party. As the size of the event increases, so does its content.

At the end of the day a big bash was held which included a performance by the Israeli pop band Dag Nachash (Fish Snake). Broiled hamburgers and hot dogs were a plenty for dinner along with snacks, wine and beer. There was something for vegetarians too, but I didn’t touch any of it.

The beer was provided by local Israeli micro-brewery Beer Bazar. Beer Bazaar started as a lone bar in Tel Aviv’s Carmel market in 2013. It has since since grown to 3 locations, 2 in Tel Aviv and 1 in Jerusalem’s Mahane Yehuda Market. They offered a wide variety of bottles including a stout and a pale ale. 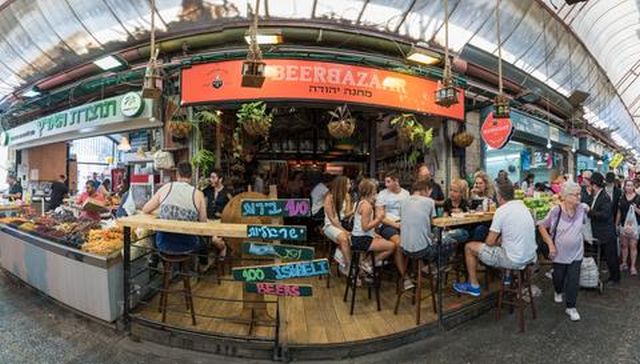 I always come prepared to these events. My coat and pants were lined with plastic baggies and hidden pockets which I filled with food and bottles of beer. It’s easier to do this sort of thing in the winter when you have an excuse to wear a baggy coat. I have enough food and beer now to last me until Passover.

Just kidding! Or am I?

So Roger Waters be damned! Startup Nation is open for business and is winning the worldwide high tech innovation race.