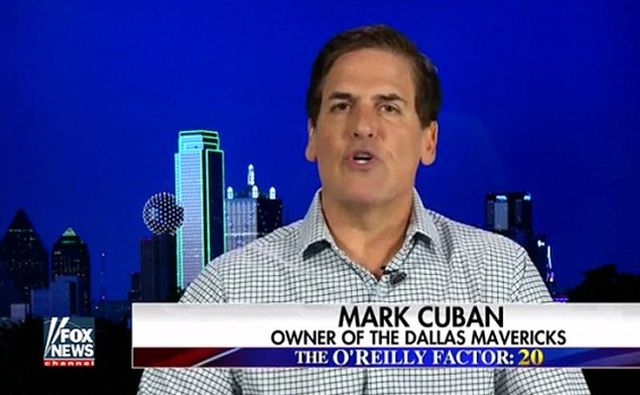 Billionaire businessman Mark Cuban is fighting back after Donald Trump decided to attack him for some reason earlier this week.

So what exactly happened? Well for no apparent reason President Trump tweeted the other day something insulting about Mark Cuban in which he said that the owner of the Dallas Mavericks is not smart enough to run for President of the United States.

In response Mark Cuban tweeted, “I don’t know. But isn’t it better for all of us that he is tweeting rather than trying to govern ?”

So why did Donald Trump go after Mark Cuban? Well Cuban told the Huffington Post that he thinks it was because of a news report which suggested that he may run against the President in 2020. Mark Cuban said, “Someone close to him told me it was a nypost article saying I was a 2020 threat. That’s all I know.”

The New York Post story about possible future challengers to President Trump quoted a source close to the President saying that people around Donald Trump are most concerned about a possible Mark Cuban challenge in 2020. A source said, “He’s not a typical candidate. He appeals to a lot of people the same way Trump did.”

“If you believe in the Trump revolution, you can believe a candidate like Mark Cuban could win an election,” the source added. “And Mark is the kind of guy who would drop half a billion dollars of his own money on the race.”

So is Mark Cuban actually going to run for President in 2020? Well the mercurial billionaire told Business Insider, “We will see.” Talk about cryptic.

And he also had sharp criticism for how Donlad Trump is dealing with the economy and his view on business in general. “He’s meeting with all of these companies but he hasn’t really. He hasn’t gotten the other point where he understands that the nature of work is changing,” said Mark Cuban.

“Technology is changing how people, how jobs, how people are hired,” added Mark Cuban. “The jobs they’re going to do. He’s, you know, he’s shuffling deck chairs on the Titanic by going and talking to these companies and dealing with 5,000 and 10,000 and even 25,000 jobs at a time.”

“Now, look, there’s nothing wrong with trying to get more jobs. That’s a good thing. But in any given month, our economy gains and loses five million plus jobs.”

Advertisement. Scroll to continue reading.
In this article:Mark Cuban, Finance