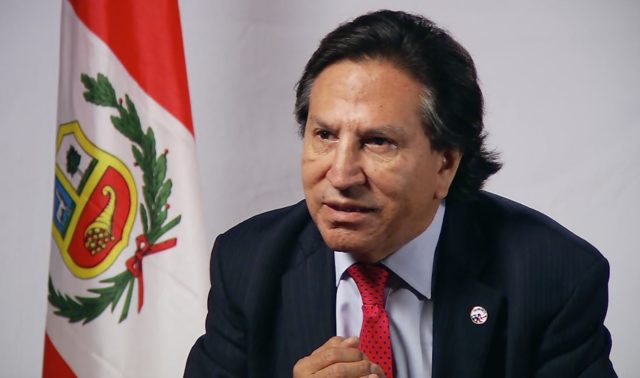 A judge in Peru issued an international arrest warrant for Former Peru president Alejandro Toledo Thursday. Police launched a manhunt over accusations he took $20 million in bribes. Toledo has denied wrongdoing and has not been charged or convicted of any crimes.

Peruvian government said Friday it now has information Toledo, 70, is in San Francisco and could try to flee to Israel. Toledo is a visiting professor at Stanford University, where he graduated with a PhD in economics. His wife, Eliane Karp, has Israeli citizenship.

Toledo has a long friendship with Israeli businessman Yosef  Maiman, who prosecutors accuse of acting as a middleman for at least $10 million in alleged bribes, Reuters reports.

The former president is accused of taking bribes from Brazilian construction conglomerate Odebrecht to give the firm a juicy contract for a highway linking Brazil and Peru. A judge ruled that he must be jailed for up to 18 months while charges against him are prepared.

Toledo has struggled to explain where the money came from.

According to AFP he originally said it was a loan from his mother-in-law that came from compensation she received as a Holocaust survivor.

But his former vice president, David Waisman – himself a prominent member of Peru’s Jewish community – said that was untrue.

“Lies just flow out of him,” he said, adding a message for his former boss: “If it turns out you’re guilty and you go to jail, then rot in there.”

Peru has been informed by US authorities that they are not planning to keep former Peru President Alejandro Toledo, from boarding a flight to Israel from California on Sunday, a source in Peru’s Interior Ministry told Reuters.

Authorities in both countries have been alerted, it said in a statement.

“US authorities have been asked to cooperate in detaining and deporting him,” it said.

Peru has an extradition treaty with the United States but does not have one with Israel.

Peru has said Interpol issued a red alert to 190 member countries to help find him, but Toledo does not appear on its list of wanted persons.