Under normal circumstances, synagogue visitors are encouraged to leave thoughts of business at the door. Things were different, however, on Wednesday, February 1, when under the auspices of the Jewish Business Development Networking group and the Queens Jewish Link, the catering hall at Young Israel of Kew Gardens Hills was filled to capacity with hungry go-getters of all ages representing a plethora of fields.

These professionals came hungry, but left satisfied. In the literal sense, their appetites were sated courtesy of Soy Sauce, a popular local kosher Chinese restaurant, and a wine tasting by area merchant HaKerem. Feeding their hearts and minds? Torah thoughts (parnossa-themed, of course) from the esteemed Rabbi Moshe Faskowitz, head rabbi of the Torah Center of Hillcrest and Rosh Yeshiva of Yeshiva Madreigas Ha’adam. Rav Faskowitz shared the advice his own rabbi gave to R’ Faskowitz’s son upon graduating college.“What does [my son] have to do to be a successful person and a successful Jew?” the rabbi recalled asking.

“But if you have those three things: You are honest, hard-working, and friendly with everyone, then you will be successful. And that is the formula for a Jew, following the dictates of Torah, to find his way.”

The rabbi concluded his remarks with a blessing that those in attendance should have the strength to reflect “the values of our people in that very difficult arena that you find yourselves, and that would be a kiddush Hashem (sanctification of the divine name) for us all.” 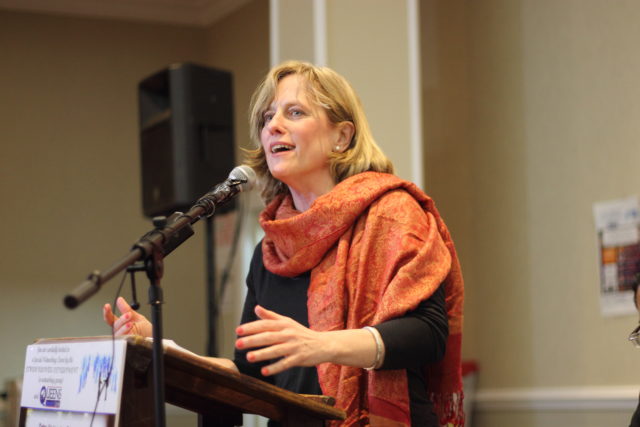 Headlining the event was city comptroller Scott Stringer. Stringer spoke of the need for local government to encourage and facilitate, rather than stifle, the development of local small businesses, and his personal efforts at combating red tape at the municipal level.

Also included in the evening’s proceedings was an annual report on the current state of the Queen’s Jewish Link by publisher Yaakov Serle, whose work was instrumental in bringing the event together. Judging by both the evening’s turnout and the continued growth of the QJL, Mr. Serle clearly has a knack for getting his fellow Queens residents on the same page.

The “main course” was originally intended to be a live presentation by networking expert Duvi Honig, founder and CEO of the Orthodox Jewish Chamber of Commerce. Unfortunately, at the time of the event was in Israel due to the passing of his grandfather (a”h). Nonetheless, Mr. Honig provided the gathering with a video message that was very well received. The theme of his talk was “Your Network is Your Net Worth,” and in it he discussed the overwhelming importance of creating and cultivating interpersonal business connections for success.

As if to drive Mr. Honig’s point home, the program concluded with a thorough round of speed networking. But instead of breaking into smaller groups and meeting one-on-one in a round-robin fashion, the event’s organizers had each individual at every table introduce themselves by microphone, one at a time. An ambitious goal, given the number of attendees. But it worked. By the end of the evening, the entire room had been exposed to hundreds of potential business contacts. Rounding out the gathering was a raffle, co-sponsored by Dunkin Donuts and Schwartz Brothers-Jeffer Memorial Chapels.

In addition to the aforementioned businesses and organizations, the Jewish Business Development networking event was made possible by a number of local institutions, including Margaret Teitz Nursing and Rehabilitation, Boulevard ALP, the Vaad Harabbonim of Queens, Karish Kapital, U.S. Asset Finders, EZF Balance, Compu-phone, Apple Bank, Take Shape for Life, and the Borodazaner Group. If Wednesday’s event demonstrated anything, it’s that business—and Jewish life—is good in Queens. And with dedicated organizations like the Jewish Business Development group mixing things up, they’re bound to get even better.