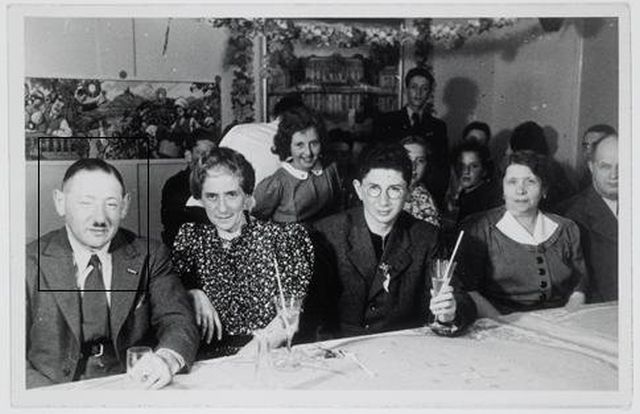 St. Louis Manifest is a new social media groups which have been formed for international Holocaust Remembrance Day this year, but is also becoming a statement against President Trump in the wake of his immigration ban on people from seven Muslim nations and Trump’s order to stop admitting refugees from the Syrian Civil War into the United States.

President Trump on Friday issued an executive order prohibiting people from seven different Muslim nations located in the Middle East from entering the United States for the next 90 days. The immigration ban affects citizens of Syria, Iraq, Iran, Sudan, Somalia, Yemen and Libya. Jewish executives from Google to Uber have condemned the immigration ban.

The name St. Louis Manifest was chosen because it was the name of the famed ocean liner filled with Jewish German refugees who were denied entry into the United States just before World War II.

My name is Joachim Hirsch. The US turned me away at the border in 1939. I was murdered in Auschwitz pic.twitter.com/pfvJtMpIps

The new twitter account was formed by Russel Neiss and Rabbi Charlie Schwartz . St. Louis Manifest offers a series of pictures of members of the 908 passengers from the S.S. St. Louis, 245 of whom were murdered in the Holocaust after their ship was sent back to Europe in 1939.

My name is Fritz Zweigenthal. The US turned me away at the border in 1939. I was murdered in France

Russel Neis created St. Louis Manifest to commemorate this year’s international Holocaust Remberance Day. The fact that this day, observed on January 27, coincided with Donald Trump’s issuing his executive order to ban immigration from those seven Muslim nations was a coincidence.

While Neis says he does not equate what Donald Trump has done with nazi Germany, he does condemn it. Russel Neis told The Daily Beast, “We didn’t plan for this executive order on immigration to coincide with Holocaust Remembrance Day and we’re not saying the U.S. is like Nazi Germany. But when people say ‘never again, we remember,’ these things should be more than empty platitudes.”

My name is Flora Wilmersdörfer. The US turned me away at the border in 1939. I was murdered in Auschwitz

Neis also spoke about the comparison between what Donald Trump is doing and the closing of America’s doors to Jewish refugees during the Holocaust with The Atlantic. “I’m not saying they are the same, but I’m a member of the Jewish faith, and my grandfather was a refugee from Poland,” he said.

“This is a country that’s built by immigrants. This is a country that is made stronger because of immigrants and refugees. This story is an opportunity to remember when the American government, I think, did not live up to its ideals. And if we’re not living up to our ideals today, then that’s something to think about. That’s the one connection I would make.”

My name is Regina Blumenstein. The US turned me away at the border in 1939. I was murdered in Auschwitz pic.twitter.com/TZXJM2Ar94

In this article:Finance, Immigration Ban