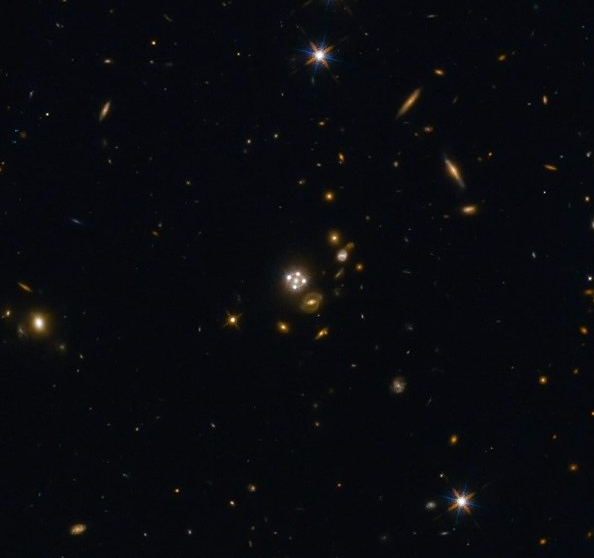 Astronomers have just made a new measurement of the Hubble Constant, the rate at which the universe is expanding, and it doesn’t quite line up with a different estimate of the same number. That discrepancy could hint at “new physics” beyond the standard model of cosmology, according to the team.

The Hubble Constant allows astronomers to measure the scale and age of the universe and measure the distance to the most remote objects we can see, said Chris Fassnacht, a physics professor at UC Davis which carried out the work.

Lead by Sherry Suyu at the Max Planck Institute for Astrophysics in Germany, the H0LICOW team used the NASA Hubble Space Telescope and other space- and Earth-based telescopes to observe three galaxies and arrive at an independent measurement of the Hubble Constant.

Eduard Rusu, a postdoctoral researcher at UC Davis, is first author on one of five papers describing the work, due to be published in the Monthly Notices of the Royal Astronomical Society.

“The Hubble constant is crucial for modern astronomy as it can help to confirm or refute whether our picture of the Universe — composed of dark energy, dark matter and normal matter — is actually correct, or if we are missing something fundamental,” Suyu said.

The H0LiCOW astronomers measured the Hubble Constant by exploiting massive galaxies that act as “gravitational lenses,” bending light from a yet more distant object.

They studied three such galaxies, each of which is bending light from an even more distant quasar, a cosmic object whose brightness fluctuates randomly. In each case the gravitational lens creates multiple images of the quasar.

Because mass is not evenly distributed through these massive galaxies, some areas bend or slow light more than others. So light from the quasar will arrive at slightly different times depending on the route it takes through the lens, just as drivers who set off from one city to another at the same time, but travel by different routes, will arrive at different times. By analyzing that “traffic delay,” the researchers could arrive at a figure for the Hubble Constant.

“These three things allow us to get a precise measure of the Hubble Constant,” Fassnacht said.

The Hubble Constant estimate from H0LiCOW, 71.9±2.7 kilometers per second per megaparsec, is accurate to 3.8 percent. The figure is in close agreement with measurements by other astronomers based on observations of supernovae, or of variable stars called Cepheids. But these estimates are rather different from that obtained from the Planck space telescope, which measured radiation from the cosmic microwave background.

The Planck measurement does rely on some assumptions, for example that the universe is flat, Fassnacht said. Or, the difference could be a statistical fluctuation that will disappear as the estimates get better — or it could be something more exciting.

“If you still see something when the error bars shrink, maybe it’s new physics, beyond the Standard Model of cosmology,” Fassnacht said.

The H0LiCOW team plans to shrink those error bars by carrying out the same measurements for up to 100 lensed quasars, Fassnacht said.

In this article:Finance, Space, Galaxies