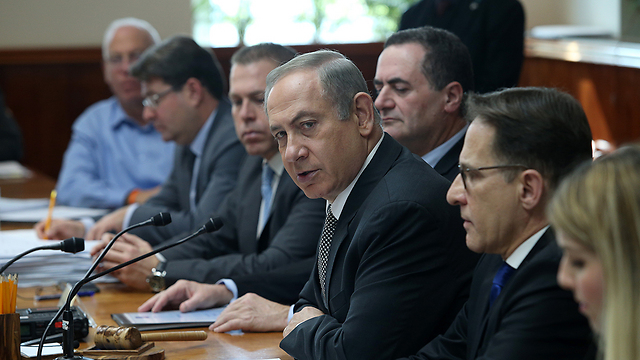 On the sidelines of the Netanyahu-Mozes police investigation, another peace conference took place on Sunday. It was on the sidelines, because in the past peace conferences used to generate wide media coverage alongside threats of a diplomatic tsunami, although they always ended with the same conscious situation in which they talk about what hasn’t happened and freeze a situation.

Master craftsmen of news understand what the reader is and isn’t interested in, what is important to the Israelis’ life and what is unimportant. The interrogations of the prime minister and the Yedioth Ahronoth publisher raise interest. Peace conferences do not.

At the same time, on Sunday, some 250 former senior defense establishment officials renewed an old initiative calling for a diplomatic solution. It’s a fact that people like me have to deal with. Most of the senior defense establishment officials see Judea and Samaria as a burden. Their assessment of risks is different from mine. Their conclusions are different. They were faced by one lieutenant general, Moshe Ya’alon, with a post on Twitter. Ya’alon, who found himself outside Likud and has since been given the derogatory nickname “leftist, ” is the only general the political Right has left – and even he is outside today.

Generals have many shortcomings, but at least they can talk about practical things, draw maps and argue about lines. They are people of action, far from messianism. Most of them lack any political skills and are incapable of creating spin for the masses. That is the reason why many of them get lost in politics. That is the reason why their campaigns disappear as fast as they are created.

Israel is no longer in love with its generals. The IDF of the past year is barely surviving its relationship with Israeli society. It hurts me personally, but it’s a fact that cannot be ignored. Part of this process is the loss of power of the retired generals. No one cares about a campaign of 250 senior defense establishment officials. It doesn’t require people to defend themselves or provide answers. Apart from Ya’alon, their own flesh and blood, who has a different opinion.

The story is not the French initiative, Amman, Washington or Oslo. With any host, it’s a foretold failure. The same applies to speeches made by US Secretary of State John Kerry, President Barack Obama and other proposals. It’s easy to undermine the foundations of the Left’s old thesis. There are not two states, but three (Gaza and Ramallah are completely disconnected); there is no option of withdrawing from the Jordan Valley (the Hashemite Kingdom’s nightmare); there is no option of evacuating most of the settlements; a Palestinian state has a slim chance of surviving, and hence the growing risk that Israel can’t take. It’s easy to undermine, but it’s harder to present an alternative. Netanyahu promised in the cabinet meeting that the tomorrow is close and that it will be different. Using his words, that is the exact way of saying nothing because there is nothing.

Donald Trump will be sworn in as US president this weekend. It’s a one-time opportunity to change the rules of the game, to present a vision that does not match all the previous peace conferences and to set in motion a right-wing Israeli initiative. But this is precisely where we get stuck. In order to say what we want, we need maps, sketches, targets. In short, we need people to talk about practical things. Real generals, or those who think in a similar manner. But there are no generals around Netanyahu. Former Shin Bet chief Avi Dichter is far behind, and former IDF Spokeswoman Miri Regev – well, she’s a different kind of general.

The Regulation Bill, which I supported, is turning into a waning spin sponsored by the government, which promised to pass it. The annexations are turning into campaigns and appear to be moving away from realization. Defense Minister Avigdor Lieberman’s promise after the United Nations Security resolution to sever ties with the Palestinians faded away on Sunday, as I expected, when it turned out that the Coordinator of Government Activities in the Territories signed a water agreement with the Palestinian Authority. And the worst thing is that the right-wing government has failed to hold a single discussion on an alternative to the Bar-Ilan speech.

The biggest Israeli failure so far is the argument over moving the US Embassy to Jerusalem. This hitch has existed for generations, but there is now a one-time opportunity. If at the end of the day, this whole tomorrow comes down to the American ambassador renting an apartment in Jerusalem’s Rehavia neighborhood and the consulate in Jerusalem working two days a week – we will have missed the entire opportunity.

The political reality is complicated. Netanyahu is busy with his investigations, the ministers are occupied with surveys, shady plans, briefs, and then doing the opposite by openly offering support. There are certain moments between the Channel 2 News and Trump’s tweets that the world looks like a parody.

I am not belittling the political difficulty. It’s very complicated to change habits, make plans, discuss a vision, make decisions precisely now. It’s not as interesting as the Netanyahu-Mozes affair. It’s just something on the sidelines, the question of where we want to go from here.