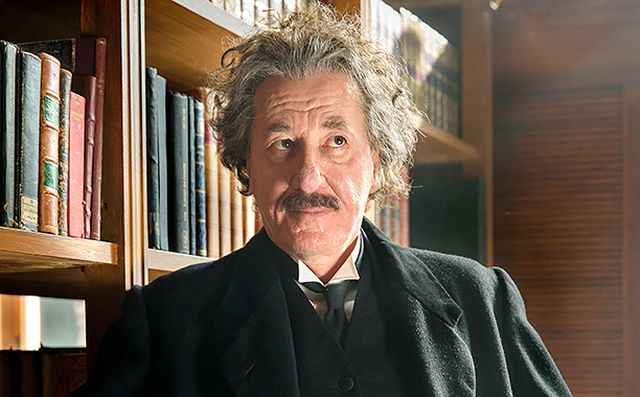 Geoffrey Rush will play the most famous Jew of the 20th Century — Albert Einstein — in a new series from the National Geographic Channel called “Genius.” No Rush is not Jewish, but he has already played a few on camera.

These roles include a Mossad chief in Steven Spielberg’s “Munich” and as musician David Helfgott in “Shine, ” the role which won Rush the Oscar for best actor of 1996.

Entertainment Weekly got an exclusive first look at Geoffrey Rush in character. And boy does Rush look just like Einstein in this picture, doesn’t he. “Genius” will be based on Walter Isaacson’s book, “Einstein: His Life and Universe.” Its scripts have been adapted by writer Noah Pink. Johnny Flynn (Lovesick) will play the young Einstein and Emily Watson (The Theory of Everything) will play his second wife Elsa.

Brian Grazer and Ron Howard serve as executive producers on the show which will have 10 episodes beginning in April.

In this article:Finance, Albert Einstein