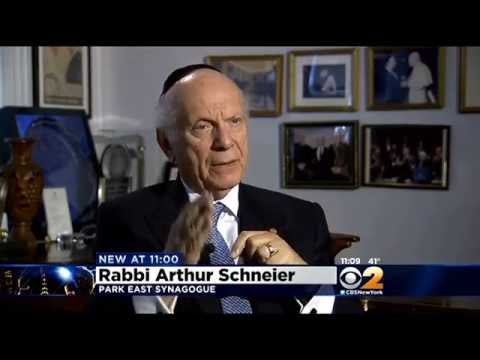 Rabbi Arthur Schneier is now a Knight of the order of St. Sylvester. The Pope bestowed the honor upon the head of Manhattan’s Park East Synagogue earlier this week.

That’s right! A rabbis is now a knight of an order of the Roman Catholic Church. We wonder if he was more concerned about accepting the honor as a Jew or as an American citizen since they are constitutionally prohibited from accepting any royal title.

The honor was conferred upon the 85 year old rabbi, who founded the interfaith Appeal of Conscience Foundation in 1965, by New York’s Cardinal Timothy Dolan. It was Rabbi Schneier’s work in the interfaith field which led to his getting this honor.

Before bestowing the medal upon the Rabbi’s chest, Cardinal Dolan said, “You know this award to our beloved Rabbi Schneier comes from Pope Francis. It’s Pope Francis’s very touching, very tender way of confirming him in the good works that he’s done on behalf of religious freedom, international peace and justice.”

Reffering to the recent commemorations over the 70th anniversary of the end of the Holocaust, Rabbi Schneier said, “Sadly the hope for a new world order of peace has not materialized. We face once again a volatile world in conflict, with radical extremists having hijacked religion to legitimize their barbarism inflicted on religious minorities, particularly Christian minorities.”

The current Pope has been working hard at making amends between the Catholic Church and the Jewish people. On that note the Rabbi has said, “This is a clear message that Pope Francis is continuing rapprochement with the Jewish people.”