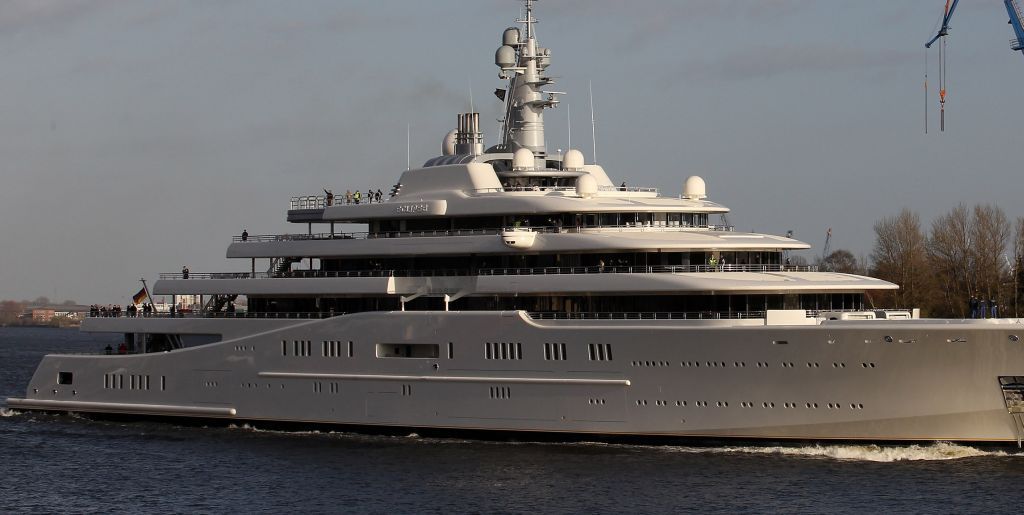 Yes, it’s been an entire month in Bermuda. Sitting there. Or rather, docked there, but to the amazement of all, Russian tycoon and Chelsea football owner Roman Abramovich has indeed moved his yacht, and it is heading down the Caribbean as we speak, according to Bernews. But if you happen to be in the Caribbean, beware snapping a picture of this yacht called The Eclipse lest you fall afoul of its complex anti-paparazzi system. But more on that later.

The Eclipse is big. So big, in fact, that it stole the title of biggest yacht from Larry Ellison’s Rising Sun which is just a wee 454ft. It is a full 500 ft long, but was bested by an even bigger yacht, the 590 ft Azzam, owned by Sheikh Khalifa Bin Zayed Al Nahyan (who not only has a bigger yacht than Ellison and Abramovich, but has a longer name than both of theirs put together)

Okay, does size matter when someone can always come along with a bigger one? We haven’t been on the Sheikh’s yacht, but does it have all this stuff that the Eclipse has? Not one but TWO helicopter pads, not one but TWO swimming pools, a disco, a library, a steam room, a whole mess of jacuzzis, two tenders, a submarine (in case of war, of course), guest cabins with six foot movie screens in each, 20 jet skis, and 6, 000 ft of room to do whatever in (I wonder what kind of books are in that library).

With all that stuff, you really need to protect yourself from pirates (Unless they are played by Johnny Depp). That is why the Eclipse has a security system that would be the envy of a small country. Not just motion sensors, mind you, but a full missile defense system, missile proof window with a crew of 70 fully trained security personnel.

Not only is it ridiculously huge, has all this stuff, and a full defense system to boot, but God forbid some pesky journalist comes along beside it desperately snapping away in a dingy or some dude out water skiing wants to snap a selfie in front of it to post on Facebook. It has, according to Superyachtfan.com, one of the most advanced anti-paparazzi systems the world has seen. Its super powerful laser system can detect a digital camera and attacks it with a beam of blinding bright light that overexposes the photo and renders it useless.

With a value of between $500 million to $1.2 billion and all that neat stuff, Abramovich can get rid of all the security and anti-paparazzi doo-dads and develop technology to make it invisible. But then if it were invisible, no one could write stories about his moving his yacht, and there goes the publicity.