–
The World Trade Center (WTC) hit the headlines in New York again yesterday, as the The Port Authority of New York and New Jersey has postponed, for a second time, a vote on whether to provide an increased loan guarantee to Larry Silverstein’s Silverstein Properties, to enable $1.2 billion of tax exempt financing for him to complete his project at #3 WTC, up from an earlier provision of US$600 million in such assistance

So far the 2.8 million square feet, 80 story, tower has been stalled at the eighth floor waiting for its long term financing, despite now having a 516, 000 square foot lead tenant on the boards, in the shape of GroupM.

Even so the Authority’s nine commissioners have now postponed for another month a vote on the increased $1.2 billion backstop for #3 WTC, at the 16-acre site being redeveloped in downtown Manhattan.

As the owner of the site the Authority is heavily invested, both morally and financially, in its rebuilding since the 9/11 tragedy that took down the twin towers in 2001.

Those who are in favor of the additional financial support, including the Authority’s Vice Chairman Scott Rechler, basically say it is time to do what has to be done to finish the whole project before serious competitors, such as The Related Companies Hudson Yards project further north, catch up and steal their thunder completely. 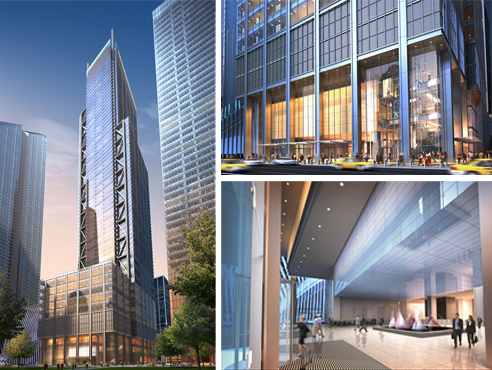 The supporters also say that finishing the project then would offer the Authority the prospect of gaining hundreds of millions of dollars to further bolster its other primary goal, which is to serve New York’s, and New Jersey’s, transportation needs.

On the other hand, opponents of giving further help to the WTC, who include the Commissioner Kenneth Lipper, see the WTC as continuing to distract the Authority from its basic job, which is to run the bridges – of course, including the now infamous George Washington Bridge – tunnels, bus stations and ports, as well as the Kennedy LaGuardia airports in New York and Newark airport in New Jersey.

In the last several months, a political scandal which has engulfed the Governor of New Jersey in the wake of some of his officials arbitrarily closing Fort Lee’s on-ramps to the George Washington Bridge at rush hour, in a form of apparent political vengeance, is now consuming a huge amount of the Authority’s attention as well. Calls for greater transparency in that brouhaha have therefore now also inevitably spilled over into an examination of the financing proposals for WTC as well.

The Authority has estimated it will have spent almost US$8 billion at the WTC site by the time it is finished, about US$2 billion more than it thought when the project started back in 2008. The Port Authority has actually been deeply involved in the real estate business since the original World Trade Center project was started by Nelson Rokefeller, back in the 1960s.

Larry Silverstein only came into the picture later, when he signed a 99-year lease for the original WTC just six weeks before the Sept. 11, 2001, tragedy which brought down the twin towers and murdered over 2, 700 people.

Ever since, rebuilding the site has been a symbol of the recovery of America from that tragedy, and today we are actually very close to that reality. Despite many disagreements over its architecture, the concerns of family members of the victims, concerns of the professional first responders, numerous lawsuits with insurance companies over compensation and disputes between Silverstein and the Authority over rent all this time while the site has been unproductive, the project is now barrelling along.

The Durst Organization is now building out the interiors at # 1 WTC, called the Freedom Tower, at 1, 776 feet in height. So is 4 WTC owned by Silverstein Properties. # 7 WTC, just off the original site, on land owned by Silverstein, was finished by Silverstein a long time ago and is fully occupied. Altogther there will be 12 million square feet of commercial space in the five towers planned, not including the underground retail, the transportation hub or the memorial areas now embedded in the footprint of the original towers.

Bloomberg reports that Robert Yaro, President of the Regional Plan Association, a land-use and transit advocacy group, told the Authority’s special oversight committee on April 21, “The Port Authority is in up to its ears in the project, and the only thing to do now is to finish the project, get it done well and turn it into the kind of asset that can produce long-term revenues to support the Port Authority’s core mission, ” adding “But it should get out of its extraneous activities as quickly as it can.”

Silverstein is seeking the extra financing help following his development of 4 World Trade Center, which officially opened late last year for tenants to build out the interior, and presently is only 55 percent leased up. Under the current plan, Silverstein would be entitled to a total of US$600 million in assistance from the City, the State and the Authority.

According to Scott Rechler’s plan, Silverstein would have to raise his equity and mezzanine-debt stake for # 3 WTC to US$450 million from its current US$300 million. Then, under the plan, the US$1.2 billion of loan guarantees for the tax exempt bonds proposed would only be needed if there were a default – and then of course Silverstein would lose the building. By insuring tax-exempt bonds, thus allowing Silverstein to get financing at a lower borrowing cost, the Authority would also collect US$100 million in fees.

“As stewards of this agency, it’s our job to finish it, ” Rechler said. “The worst thing we could do is not act and lose this important tenant that’s making a commitment to Lower Manhattan and the World Trade Center site, ” Rechler said, referring to GroupM the lead tenant.

Janno Lieber, president of Silverstein’s World Trade Center unit, who attended the packed meeting, said afterward that he was “optimistic” the deal would go through. The developer claims to have paid more than US$1 billion in ground rent to the authority since the 2001 tragedy. Silverstein has also given the Port Authority US$3 billion in insurance proceeds, Lieber said – so it has been a two way street.

Port Authority Executive Director Pat Foye, whose job is to now fled this hot potato and bring it back for a vote in more palatable form a month from now, said the Commissioners will need to find a way to reduce the Authority’s risk and get more favorable terms.

In the end, the specter of Hudson Yards going up just a few blocks to the north will concentrate minds, and likely produce a positive vote. Notwithstanding a current 14% vacancy level in downtown Manhattan, the WTC is the most important space there, and the most important Class A space too, and given a continued improving economy will likely fill all the space once everyone knows the end game is in sight.