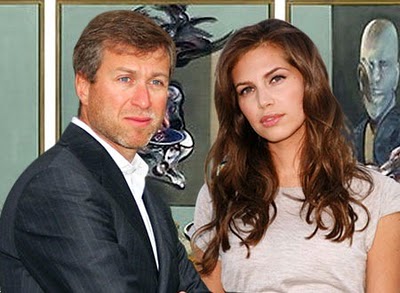 On Monday, when Dr. Martin Luther King’s birthday and contributions to equal opportunities for African-Americans were marked by ceremonies, speeches, school assemblies and a legal holiday across the US, the venerable civil rights hero had reason to roll over in his grave. And from an unexpected source: An online Russian fashion magazine which published a photo of fashion model Dasha Zhukova, longtime girlfriend of Russian billionaire Roman Abramovich.
In what was an unfortunate error of timing, Buro247.ru chose Martin Luther King Jr. Day to publish an interview with Dasha Zhukova about her new fashion magazine Garage. But that wasn’t the problem. It was the photo that accompanied the piece, featuring Zhukova astride a chair bearing an uncanny resemblance to a black woman doing a forward bend scantily with legs in the air while scantily clad in a bondage costume. Zhukova meanwhile, is outfitted in a modest white button-down shirt and jeans.
Note to art lovers: The chair is actually a twist on an existing, and very famous, piece of pop art at the Tate Gallery in London. The artist is Allen Jones, the art-work there is simply called ‘Chair’ and he created it as long ago as 1969.

The response to the Zhukova photo was fast and furious and had little to do with collectible art. “Those of us who have seen the image … think that the Russian police should find the fake artist who has caused international offense and arrest him or her and put them in jail for the international crime they are promoting, ” fumed Marcia Simpson-James, head of the London based Carbon Philter Institute, a black human rights NGO in an open letter to fellow Londoners Zhukova and Abramovich. “I will never think of a Russian person, or the country of Russia, as decent ever again.” Simpson-James sent a copy to The Moscow Times.
Many online reactors viewed the chair and Zhukova’s perch upon it as a reflection of the longtime and lingering prejudice against and subjugation of blacks. Included was activist and feminist author Jennifer Pozner’s labeling the photo as “racist misogynist imagery.” “MLK didn’t die for this” another one tweeted while still another commentator summed it up in one word: “Awful.”
In the wake of this angry wave of accusations of racism, Zhukova defended her decision to pose for the photo. In a statement, she remarked that the photo, “which has been published completely out of context, is of an art work intended specifically as a commentary on gender and racial politics.” And she went to call the photo debacle as “regrettable” (especially given the timing on the slain civil rights leader’s annual commemoration) and say that she “utterly abhor(s) racism, and would like to apologize to anyone who has been offended by the image.”

Buro 24/7 has also been the target of an avalanche of recriminations. Publishers defended the magazine on its Facebook page (in Russian and English both) by insisting it is “against racism and everything that may humiliate people, ” that it has always “supported equal rights for all people” and that the photo “should be seen like nothing but a piece of contemporary art.” But nonetheless they offered an apology “if the posted photos insulted our readers.”
Socially responsible art lovers will be relieved to learn that a “white” version of Norwegian artist Bjarne Melgaard’s chair is also on the market, though it was not selected for this shoot. But click-happy readers won’t find the offending image on Buro247.r ’s site any longer. The publishers have opted to crop it, leaving in the chair’s feet and the rest to the reader’s imagination.

Roman Arkadyevich Abramovich, 47, is a Russian businessman and principal of the private investment company Millhouse LLC as well as owner of Chelsea Football Club, an English Premier League football team. Abramovich’s fortune of approximately $4.6 billion ranks him as the 5th richest person in Russia and the 50th in the world, according to the 2012 Forbes list.

Abramovich’s Midas touch has succeeded in a wide range of businesses from dolls to pig farms and from tire retreading to bodyguard recruitment. In the early 1990 he founded five companies trading in oil products. But in 1992, he was arrested and sent to prison in a case of theft of government property involving a train containing 55 cisterns of diesel fuel, worth 3.8 million rubles. The case was eventually dismissed though other allegations of foul play have been leveled over the years. He then branched into consumer goods, becoming a close friend of President Boris Yeltsin, and moving into an apartment in the Kremlin.

In 1999, already quite wealthy from oil, aluminum and consumer goods, Abramovich was elected governor of Russia’s remote, poor eastern region of Chukotka, where he invested millions to upgrade the quality of life over the next eight years he remained in that role.Born into a Jewish family, Abramovich served as chairman of the Federation of Jewish Communities of Russia and has been a generous donor to Chabad. He has been married twice, and had five children before meeting Zhukova. They have two children together.
Dasha Zhukova, 32, is a philanthropist, entrepreneur, fashion designer and editor-in-chief of bi-annual art and fashion magazine GARAGE . Daughter of Alexander Radkin Zhukov, a prominent Russian businessman and oil magnate, her mother is Elena Zhukova, a (Jewish) Russian scientist who is now retired from UCLA where she was professor of molecular biology. Zhukova spent most of her childhood in the US and attended a Jewish day-school in California. With degrees in Slavic studies and literature, she enrolled in London’s College of Naturopathic Medicine. In addition to business ventures in fashion and design, in 2006, Zhukova co-founded the fashion label Kova & T with her childhood friend Christina Tang.

She maintains a role in the creative direction of the company, which recently announced a collaboration with Urban Outfitters. In 2008, Zhulova established the IRIS Foundation, designed to promote contemporary arts and culture. Her involvement in Moscow’s Garage Center for Contemporary Culture has led to Abramovich’s investment in a Garage satellite on St. Petersburg’s New Holland Island. Through IRIS, Zhukova also conducts arts projects throughout the world, including exhibitions, performances and editing Garage to “ignite raw collaborations between art, fashion, and literature.”