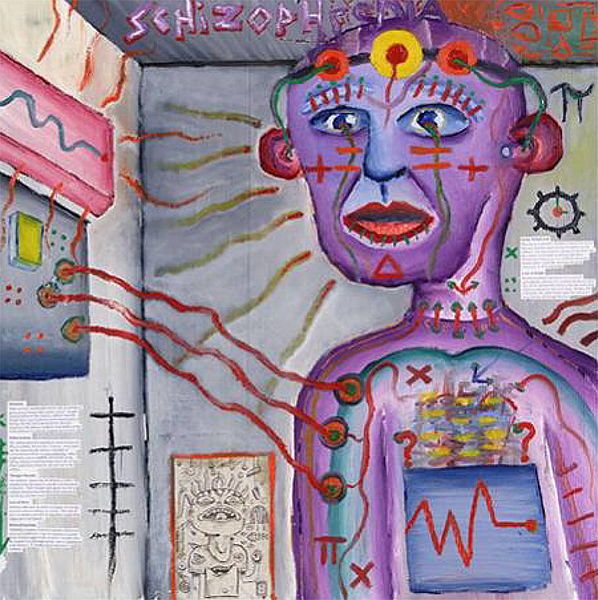 Artistic view of how the world feels like with schizophrenia / Wikipedia

Surprisingly little is known about schizophrenia. It was only recognized as a medical condition in the past few decades, and its exact causes remain unclear. Since there is no objective test for schizophrenia, its diagnosis is based on an assortment of reported symptoms. The standard treatment, antipsychotic medication, works less than half the time and becomes increasingly ineffective over time.

Now, Prof. Illana Gozes – the Lily and Avraham Gildor Chair for the Investigation of Growth Factors, the director of the Adams Super Center for Brain Studies at the Sackler Faculty of Medicine, and a member of the Sagol School of Neuroscience at Tel Aviv University – has discovered that an important cell-maintenance process called autophagy is reduced in the brains of schizophrenic patients. The findings, published in Nature’s Molecular Psychiatry, advance the understanding of schizophrenia and could enable the development of new diagnostic tests and drug treatments for the disease.

“We discovered a new pathway that plays a part in schizophrenia, ” said Prof. Gozes. “By identifying and targeting the proteins known to be involved in the pathway, we may be able to diagnose and treat the disease in new and more effective ways.”

Autophagy is like the cell’s housekeeping service, cleaning up unnecessary and dysfunctional cellular components. The process – in which a membrane engulfs and consumes the clutter – is essential to maintaining cellular health. But when autophagy is blocked, it can lead to cell death. Several studies have tentatively linked blocked autophagy to the death of brain cells seen in Alzheimer’s disease.

Brain-cell death also occurs in schizophrenics, so Prof. Gozes and her colleagues set out to see if blocked autophagy could be involved in the progression of that condition as well. They found RNA evidence of decreased levels of the protein beclin 1 in the hippocampus of schizophrenia patients, a brain region central to learning and memory. Beclin 1 is central to initiating autophagy — its deficit suggests that the process is indeed blocked in schizophrenia patients. Developing drugs to boost beclin 1 levels and restart autophagy could offer a new way to treat schizophrenia, the researchers say.

“It is all about balance, ” said Prof Gozes. “Paucity in beclin 1 may lead to decreased autophagy and enhanced cell death. Our research suggests that normalizing beclin 1 levels in schizophrenia patients could restore balance and prevent harmful brain-cell death.”

Next, the researchers looked at protein levels in the blood of schizophrenia patients. They found no difference in beclin 1 levels, suggesting that the deficit is limited to the hippocampus. But the researchers also found increased levels of another protein, activity-dependent neuroprotective protein (ADNP), discovered by Prof. Gozes and shown to be essential for brain formation and function, in the patients’ white blood cells. Previous studies have shown that ADNP is also deregulated in the brains of schizophrenia patients.

The researchers think the body may boost ADNP levels to protect the brain when beclin 1 levels fall and autophagy is derailed. ADNP, then, could potentially serve as a biomarker, allowing schizophrenia to be diagnosed with a simple blood test.

To further explore the involvement of ADNP in autophagy, the researchers ran a biochemical test on the brains of mice. The test showed that ADNP interacts with LC3, another key protein regulating autophagy – an interaction predicted by previous studies. In light of the newfound correlation between autophagy and schizophrenia, they believe that this interaction may constitute part of the mechanism by which ADNP protects the brain.

Prof. Gozes discovered ADNP in 1999 and carved a protein fragment, NAP, from it. NAP mimics the protein nerve cell protecting properties. In follow-up studies Prof. Gozes helped develop the drug candidate davunetide (NAP). In Phase II clinical trials, davunetide (NAP) improved the ability of schizophrenic patients to cope with daily life. A recent collaborative effort by Prof. Gozes and Dr. Sandra Cardoso and Dr. Raquel Esteves showed that NAP improved autophagy in cultures of brain-like cells. The current study further shows that NAP facilitates the interaction of ADNP and LC3, possibly accounting for NAP’s results in schizophrenia patients. The researchers hope NAP will be just the first of their many discoveries to improve understanding and treatment of schizophrenia.

Graduate students Avia Merenlender-Wagner, Anna Malishkevich, and Zeev Shemer of TAU, Prof. Brian Dean and colleagues of the University of Melbourne, and Prof. Galila Agam and Joseph Levine of Ben Gurion University of the Negev and Beer Sheva’s Psychiatry Research Center and Mental Health Center collaborated on the research.