Global Switch, a leading owner and operator of large scale, multi-tenanted, carrier-neutral data centres in Europe and Asia-Pacific for the telecoms industry, announced today it has completed two new bond issues, one in pounds Sterling and one in Australian dollars.

For their new Sterling bond issue Global Switch succeeded in raising £350 million of 9 year money, with a coupon of 4 3/8th% per annum.

For its new Australian dollar offering the company raised A$100 million of 7 year bonds, with a coupon of 6 ¼% per annum. Having built a data centre in Sydney, Australia it makes sense now to match its asset there with some financing in the same currency, in order to provide a natural hedge for part of the balance sheet.

Global Switch is a UK based private company headquartered on the fourth floor of the Millbank Tower, beside the river Thames in London. Formerly the Vickers building, and a very prominent London landmark, the building is owned today by the Reuben brothers, David and Simon who bought it in 2002.

Global Switch is also owned by the Reuben brothers, through a company called Aldersgate Investments Ltd. Aldersgate is incorporated in the British Virgin Islands and is wholly owned by family trusts controlled by David and Simon Reuben, both of whom are also British citizens.

Aldersgate, which is head-quartered in Geneva, operates as a holding company for its property related and other investments. Its current portfolio consists of investments in the United Kingdom, in mainland Europe and other jurisdictions.

The US$650 of total money raised by Global Switch in this new round of financing will not be used to develop the business, but instead will be utilized as part of the funds deployed to pay a US$950 million (£600 million) special dividend to its parent company Aldersgate, i.e. ultimately to the Reuben brothers.

After investing in the business faithfully to build it up to its present size, where it has developed over 3 million square feet of specialized data centre space, it is only natural for the owners to want to take some of their money out now it has become successful.

As the intention to pay the dividend was certainly flagged in advance to the ratings agencies, without impacting the soundness of its rating, the balance sheet must be in good shape even after the dividend payment to retain its investment grade performance.

In rating the company for the first time in November, Standard & Poors in fact noted the company’s stable and predictable earnings profile, as well the high quality of its assets in key markets. Moody’s also guided that Global Switch could extend borrowings without affecting its existing credit rating, Baa3 with stable outlook. Similarly, Fitch affirmed the company’s BBB rating in the light of its then prospective bond issue.

The reason the Reuben brothers got into the data centre business in the first place is likely that as real estate developers themselves they recognized early on that at its core it is primarily a real estate business. Its key distinguishing feature is the provision of specialized spaces for its customers. In those spaces proximity between partners, customers and competitors, all of whose fibre nodes and data streams can meet at the same point, connect and then spread out across the world again is an essential element of the business.

Large telecoms carriers, service providers and large multinational and national corporations all have an interest in being as close to each other as possible where all their national, international and local fibre nodes and hubs, and private corporate VPNs, can intersect so that network interconnections can take place with maximum redundancy, safely and without latency or threat of interruption.

Global Switch provides the large specialized buildings to permit this, offering massive power supplies, fibre links, continuous high levels of security and blocks of spaces in many different sizes. Then by offering a completely carrier neutral range of services Global Switch’s customers can feel confident that their needs are being met without any favouritism.

Moreover their customers save the capital expenditures that doing it themselves would entail, with a result that is actually operationally superior for them too, as their trunk interconnections with everybody else can all be laid on for them all in the same place.

Global Switch today operates nine data centres in key telecoms markets. Seven are located in Europe, with two each in London and Paris, and one in Amsterdam, Madrid and Frankfurt. Two more in Sydney and Singapore provide coverage for the Asia Pacific market.

These existing centres presently have 3.1 million square feet of gross area across the portfolio. They have large power installations, with multiple layers of redundancy and state of the art security and monitoring systems in place 24/7/365.

All the Data centres are operated to a Tier III + standard which requires dual-powered equipment, multiple uplinks and lots of fault tolerant equipment. To date Global Stich’s data centres have demonstrated better than 99.999% uptime reliability historically across the portfolio. Tier IV itself would guarantee 99.995% availability so for now they are doing even better. 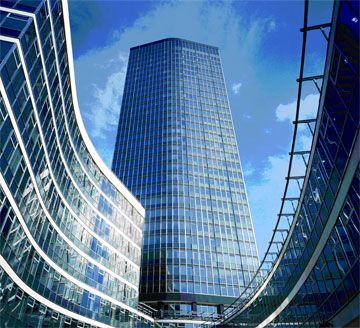 Commenting on the just completed new bond issues, John Corcoran who is Executive Chairman of Global Switch, and a key executive in building the business to this point, said,

“As a result of this process Global Switch now has a more appropriate long term capital structure. We have once again demonstrated our access to the deep liquidity of the international bond markets and were able to take advantage of a low interest rate environment to reduce our cost of capital.”

“We were delighted to see such a positive investor reaction to the Global Switch credit in both the European and Australian markets and it was encouraging to see so many of our existing Euro bond investors participate in this latest fund raising”.

About the Reuben Brothers

David and Simon Reuben were born in Mumbai to British parents. The family came back to England when the boys were teenagers in order to attend English secondary schools. They started early in business, in carpets, real-estate and metals trading.

After making the base of their existing fortune in Russian aluminium trading in the early days after the fall of the Soviet Union, they knew when to leave at the right moment and then ploughed much of their profits into the best of London real estate.

A few months ago Jewish Business news reported [link] the two brothers had purchased the Cambridge House on Piccadilly, site of the former Naval and Military Club and once the home of British Prime Minister Lord Palmerston in the nineteenth century, for US$160 million with the intention of restoring it to its former glory.

The Reuben brothers were ranked second in this year’s Forbes Magazine List of UK Billionaires with an estimated fortune of about US$9 billion.

Both brothers are married with children and are intensely private persons. David Reuben lives in London in the same house he has owned for the past 20 years.