If you thought pyramids were only to be found really in Egypt, and of course also maybe in Las Vegas, think again.

The 45, 000 square feet of retail space at the Durst Organization’s planned amazing new pyramid power tower, located at 625 West 57th Street, is just now coming onto the leasing market it seems. With 27 foot ceilings in some places, the retail space at the Bjarke Ingels Group-designed development will front both on West 57th Street and 12th Avenue. Its’ largest single retail unit will alone contain about 24, 000 square feet of the space. The building is being developed by the Durst Fetner Residential Group partnership.
Marketing documents for potential retail tenants are now circulating, first noticed by New York website BuzzBuzz. As an inducement to prospective tenants these affirm there are about 10, 000 residential units within 10 blocks of the site, all potential local shoppers and including almost 600 right next door at the Helena Tower, also developed by the Durst Fetner Residential partnership. It is no coincidence that Helena Rose Durst is a Vice President of The Durst Organization, who is said to indeed love the Hudson River side of New York.
The project is expected to be ready for occupancy, for both the residential and retail components in just two years from now. 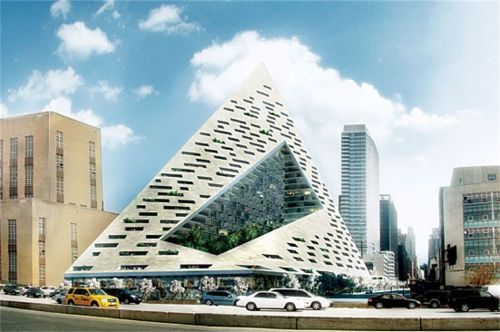 It was only twelve months ago that New York’s planning commission gave planning approval for the astonishing new pyramid shaped building. The only outstanding item of significance after obtaining the planning approval was an issue concerning the length of time the 20% affordable housing component would stay affordable. With marketing materials now going out for the retail leasing component one may infer all of that is now behind them.

The project now comprises 750 rental apartments and about 45, 000 square feet of retail space, and has been designed by award winning Danish architectural firm the Bjarke Ingels Group, otherwise known by its friends as BIG and led by celebrated Danish architect Bjarke Ingels.

The development has two powerful real estate companies behind it, the Durst Organization and Sydney Fetner Associates, who are now bringing it to fruition, with scheduled completion and opening previously indicated to be in early 2016.

As they have been in the past mainly been a developer of commercial office space, today for all their residential projects Durst works in partnership with Sydney Fetner Associates, with whom they have formed together the Durst Fetner Residential Group.

This latest project together is completely stunning, occupying as it does a whole north-south city block at the corner of West 57th street and Twelve Avenue on the West Side of mid-town Manhattan, directly overlooking the Hudson River and the Hudson River Park. 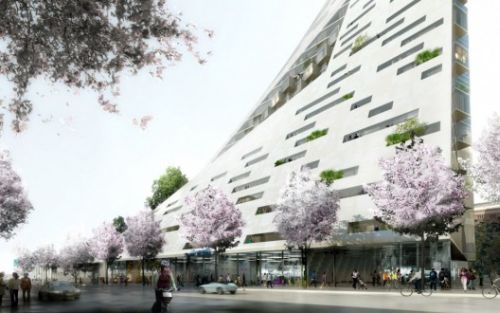 According to the architect’s own, somewhat elegiac, original concept description of the property it is a hybrid design, between what it terms a European “perimeter block” and the traditional Manhattan high-rise, with a unique shape which manages to combine the advantages of both.

“The compactness and efficiency of a courtyard building provides density, but also a sense of intimacy and security. As well there will be the airiness and the expansive views of a skyscraper” say the architects dreamily. 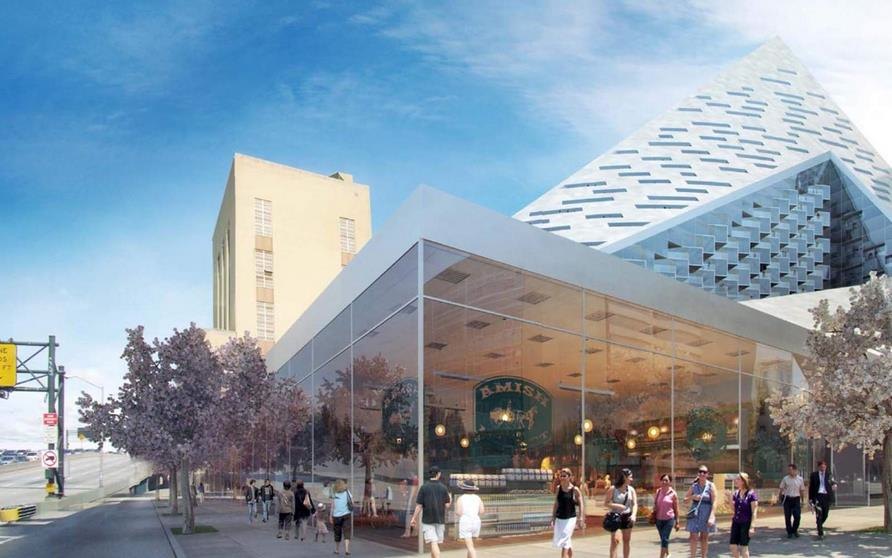 The genius of the design though, has been that by keeping three corners of the block low and then lifting the north-east corner alone up towards its maximum 467 foot high peak, the courtyard in the middle opens views towards the Hudson River. This will also bring the sun into the whole block all day long and even preserve a view of the river for the building next door, which is the Helena rental apartment building also developed by Durst Fetner Residential.

The form of the building also accordingly shifts depending on the viewer’s vantage point; while appearing like a pyramid from the West Side Highway, it then turns into a dramatic glass spire if viewed from West 58th Street.

Mathematical purists may correctly call the building a tetrahedron, but everyone else will likely see it a pyramid, and once it is built we can then decide for ourselves. But it is certainly something completely different, as Monty Python has said on occasion, and will be perhaps the most unusual apartment building in the city, and possibly even the whole country.

It seems that in planning for the site, after a number of conventional projects had fallen through, City Planning Commissioner Amanda Burden had urged the developer to think big, and the hiring of BIG, pun absolutely intended, as architects to develop this powerful design, completely appropriate to the site, was the result.

While there are a lot of new luxury building projects going up on West 57th these days, the conception of this one is almost certain to ensure its success if the developers now build it to their declared usual high standards of project execution.
Renderings of the new project showing street scape– courtesy Durst Fetner group

About The Durst Organization

Established in 1915, Durst Organization is one of the oldest family-run, commercial and residential real estate companies in the city of New York. Today the company is owned and managed by the third generation of the Durst family.

Durst owns and manages more than 13 million square feet of completed Class A office space in New York’s mid-town neighbourhood, and with its partner over 1, 800 luxury residential rental apartments. Today as well, the company is overseeing the development, management and leasing of One World Trade Center in downtown New York. 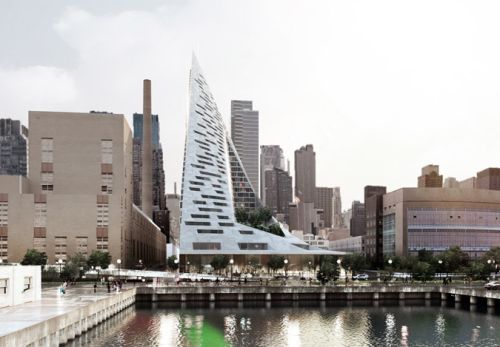 Douglas Durst is the Chairman and a member of the third generation to lead the Durst Organization. He was born in New York City in 1944 and graduated from the Fieldston School and the University of California at Berkeley.

He is married to Susanne Durst, with whom he has three children: Anita, Alexander, and Helena. He joined The Durst Organization in 1968, learned the ropes from his father, Seymour, and two of his uncles.

As well as interacting personally with a number of the city’s professional real estate bodies, Douglas has been involved with the theatrical arts for many years and is a member of the board of directors of The Roundabout Theater and Primary Stages.

Along with other family members, he is also a trustee of The Old York Foundation, which was established by his father and which is committed to helping people through education to understand the history and issues facing New York City.

In addition, Douglas has been an environmental activist for many years and created one of the largest organic farms in New York State.

Jonathan (Jody) Durst is President of Durst Organization. He started his career with Durst in 1984 working in the construction department. He then moved on to both direct the operation of millions of square feet of commercial office space, and to supervise new construction projects, in midtown Manhattan.

In 2005, Jody joined his cousin Douglas as leaders of The Durst Organization, and under their stewardship the company built the nation’s first sustainable skyscraper, 4 Times Square, and the first top rated LEED (leadership in energy and environmental design) Platinum high-rise office tower, The Bank of America Tower at One Bryant Park.

Before joining The Durst Organization, he did something a little different and worked as an engine performance engineer for the Chrysler Corporation and as a Research and Development Engineer for FMC (Food Machinery Corporation), within a division that manufactured large diesel tractors.

Jody holds a Bachelor of Science degree in Mechanical Engineering from Tufts University. 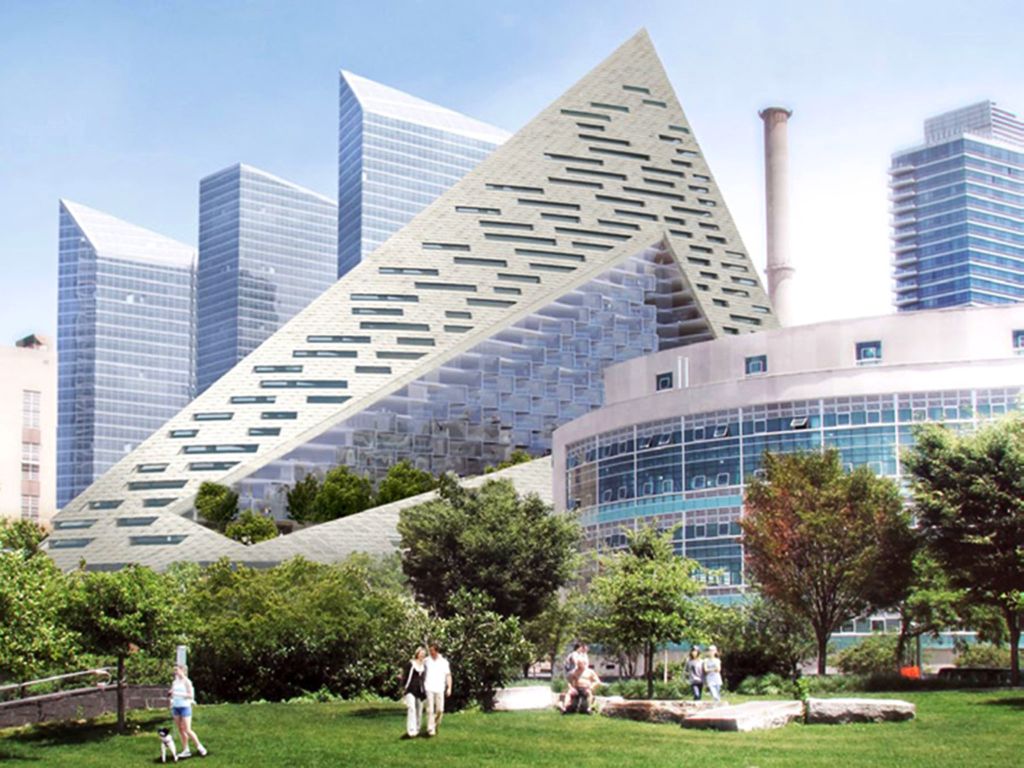 Harold Fetner became CEO of Sidney Fetner Associates in 1988, and was named CEO of Durst Fetner Residential at its inception in 2007. Under Mr. Fetner’s direction, SFA’s portfolio has grown exponentially, all through ground up development, allowing the company to earn its reputation as a premiere residential development and management company.

Mr. Fetner graduated from the Whitman School of Management at Syracuse University, and earned his Doctorate in Jurisprudence from New York Law School. Prior to joining Sidney Fetner Associates, he served as a clerk for the Honorable Joe Hynes, Special Prosecutor of the State of New York.

Harold Fetner is an active supporter, with his family, of several charities including the American Cancer Society and Syracuse University. He has created the Fetner Program fund, a scholarship at the Whitman School of Management at Syracuse, where he serves as a guest lecturer, dedicated to students pursuing sustainability. He and his wife have also established a scholarship at their local synagogue for those who cannot afford a Jewish education.

Mr. Fetner resides with his family in Westchester, and he enjoys marathon running and triathlons.