The goal of the Ghermazians was for their company Triple Five to restore, complete and substantially improve the concept for the mall to become one of the finest destination malls in the United States, also with a new name:

On Friday news site NorthJersey.com reported that Triple Five has now gained approval from the State of New Jersey for a US$390 million tax break that is the key final component of the Ghermazians plan for financing the new mall. A Triple Five spokesman said work would now begin immediately on the site, located beside the Meadowlands Sports Complex whose MetLife Stadium is home to not one but two NFL football teams – the New York Giants and the New York Jets.

At 5 million square feet it will become America’s largest shopping centre. Located very close to Manhattan with a train station right beside the sports complex and the mall, the Ghermazians are expert at bringing destination customers to their locations, even flying them in from as far away as China to their mega-mall in Canada, West Edmonton Mall. 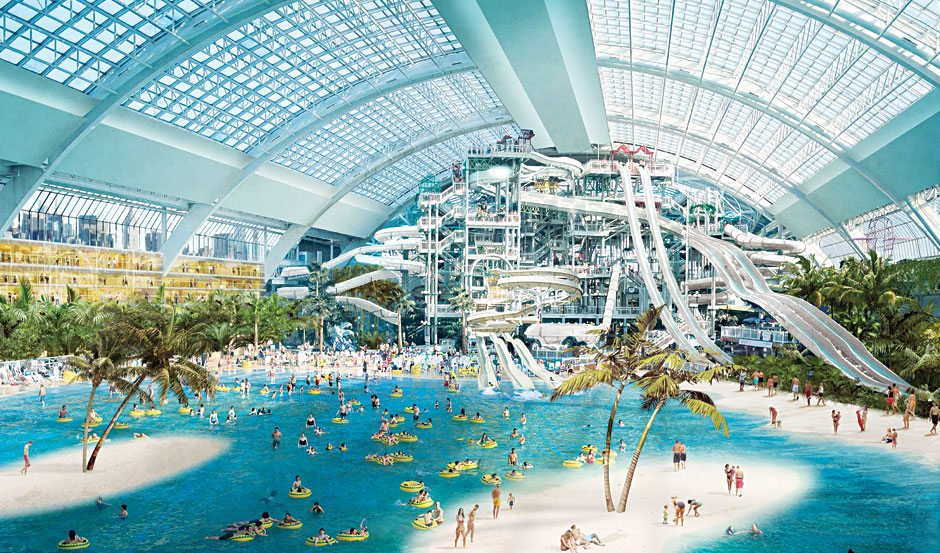 New public financings for the mall are to include a US$748 million public bond offering for Triple Five according to NorthJersey.com. An additional US$494 million in public bonds will then apparently be backed by property tax breaks granted to the Ghermazians by the borough of East Rutherford where the mall is located.

The Ghermazians plan to complete the existing, 80% built, structure, to extensively re-finish it on both the outside and the inside, and also to build a new 639, 000 square-foot indoor water and amusement park as an integral part of the mall.

The Economic Redevelopment Grant awarded by the Economic Development Authority of New Jersey on Friday allows for Triple Five to recoup 20 percent of its new construction costs by paying only 25% of its normal annual tax bill until then.

The vote came one day after the state Local Finance Board had also approved East Rutherford’s part of the bonding plan. That agreement redirects the bulk of taxes otherwise due to the borough towards construction costs. Under the deal, the borough will instead receive an immediate US$20 million payment to pay off debt on its new justice center, more than US$80 million over a 33-year span, and relief from any future expenses for police, fire, or security responsibilities.

Officials say both components of the public bonds are being offered to sophisticated investors on a “non-recourse” basis, meaning that none of the public agencies involved in the deal are exposed in the event of a default by Triple Five or the new mall.

Tony Armlin, a Vice President of Triple Five told NorthJersey.com that site work will now begin immediately and that steel could begin going up in January or February to construct the space for the first of two anchor tenants. The much needed remodeling of the exterior will begin next spring and construction of the indoor water and amusement park to follow after that.

Even so, the project is still not expected to open before late 2015 at the earliest as it remains a major construction project, not necessarily made easier by the need to substantially alter many of the existing components already built on the site.

In the continuing aftermath of the fallout from Hurricane Sandy, which caused extensive economic damage to the coastal portion of the State it is good to see that New Jersey officials are anxious to develop projects rapidly now to help restore its economic equilibrium again. Triple Five are certainly beneficiaries, though it is likely that the future success of the mall will more than vindicate the State against those who have criticized the extensive tax breaks which have been offered.

Finally Governor Chris Christie himself should benefit in the final run up to his re-election bid for a second term on November 5th. On Friday he even attended a campaign event in Rutherford, together with ex Mayor of New York Rudy Giuliani who sang his praises highly.