Peter Munk’s Barrick Gold Corp of Toronto, today announced its results for the third quarter of 2013 and postponement of its latest gold mining project.
The gold and copper mining company reported third quarter net earnings were $0.17 billion ($0.17 per share), compared to $0.65 billion ($0.65 per share) in the same period in the prior year. Net earnings reflected the impact of lower realized gold and copper prices, higher interest expense and higher income tax expense, partially offset by higher copper sales. At least they still showed a small profit, which coming after the massive $9.3 billion in total mine impairment charges taken in the previous quarter must be a major relief.

Given the impact of continuing soft gold prices – they have so far fallen over 20% this year – Barrick also announced the decision to suspend indefinitely work on its massive new gold mining project, Pascua-Lama on the Argentina-Chilean border, in order to conserve cash. The eventual total cost of this project is now estimated at somewhere north of $8 billion, compared to just a planned $3 billion when it got started four years ago, illustrating that even experienced operators can sometimes get totally bogged down in a badly managed development project.

Work on the new mine, located more than 12, 000 feet up in the mountains of the Andes, had in practice already partially come to a halt anyway amid serious water contamination problems. All activity had stopped except that needed for environmental protection and regulatory compliance. Barrick says a restart could come at any time, and it would depend on future costs, gold prices and the ongoing regulatory and legal outlook for the mine.

Barrick also said it expects to eliminate 1, 850 jobs by early next year and that it is 85% of the way toward that goal. The company is trying to flatten and streamline is operating model, and will eliminate its current regional business units. 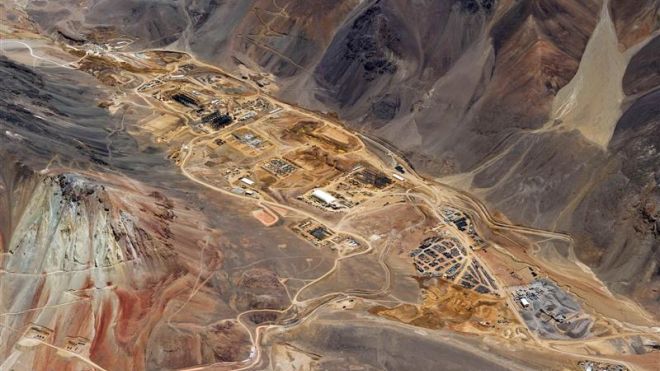 Pascua-Lama Mine on the Argentina-Chilean border
–

The company has started to come under some pressure as its debt has increased. The impairment charges taken in the last quarter had also knocked one-third off the book value of its equity. In response CEO Jamie Sokalsky has likely been looking hard at how to raise some new money, either by selling a stake in the public company, or by selling stakes in some of its mining properties, including Pascua-Lama itself. Barrick might even decide to strategically exit the copper business, sell its copper assets and become a pure gold play again.

Barrick is presently valued on the stock market at $19.4 billion which is about 20% over its current book value, – and 42% less than at the start of the year.

In a triumph of understatement one analyst quoted by Bloomberg said “The sale of a stake in the company to a strategic investor may be negative for current shareholders because they would be diluted.”

However Barrick may not have much choice as investors could well prefer the lower risk of purchasing shares in a still profitable entity compared to the still somewhat speculative nature of the new Pascua-Lama mine itself. This is likely particularly so for the, generally risk-averse, Chinese, who have been touted as a possible partner due to the presence of Barrick’s Co-Chairman John Thornton on the Advisory Board of China’s sovereign wealth fund the China Investment Corporation.

Barrick CEO Jamie Sokalsky nevertheless said last month that in spite of a rise in its debt, now at over $14 billion, Barrick has no issues regarding its liquidity. According to Sokalsky the company’s scheduled debt repayments of $1.3 billion through 2015 are less than its operating cash flow in the first half of this year alone.

If this is indeed the whole picture it gives the company time to get its house in order and its flows of cash in balance again, especially for capital expenditure which can dominate most of the other items in a mining company’s cash flows. The delay to Pascua-Lama has obviously played a key role in this, as the suspension of construction will reportedly now save a further $1 billion of expenditures during this critical period.

Barrick has already reduced its dividend payments, has $2.4 billion in cash in hand and, as well, an undrawn $4 billion credit facility according to the company. So unless gold price should hemorrhage further it looks like the company may slowly be coming back into balance.

Peter Munk was born in Hungary. After escaping from the Nazis with his parents in 1944 he came to Canada where he graduated in Electrical Engineering in 1952 at the University of Toronto.

A budding entrepreneur with a strong flair for design his first business was Clairtone which manufactured high-end stereo systems and televisions. Successful for a time it eventually failed and he and his partner were left under a cloud for a time.
But failure breeds success if you have the right stuff and he soon bounced back with Southern Pacific Hotels an international hotel chain which was doing very well until the Egyptian government expropriated one its prime properties beside the pyramids.
After a brief stint in the oil and gas exploration business, called Barrick Resources, he then ended up back-merging into a mining company that went on to become the world’s largest gold producer Barrick Gold Corp.
Divorced with three children, and re-married to Melanie with whom he has two more children, he has also given many millions to charities, particularly the Toronto General Hospital and the University of Toronto.