The demonstration model is slated to be ready for field testing by the end of 2014. 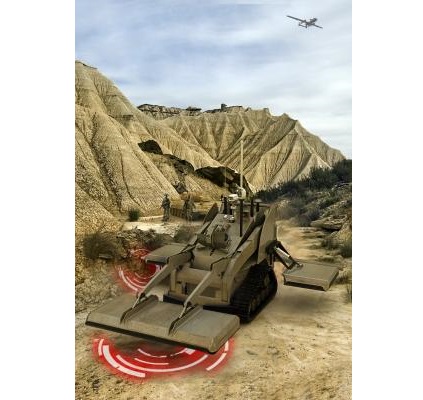 MIDS will be deployed on a ruggedized, commercial, light tracked or wheeled (manned and/or unmanned) engineering vehicle according to customer requirements. It will carry an advanced ground-penetrating radar (GPR) and metal detector (MD) arrays into high threat environments to identify deep buried and surface laid mines / IEDs in, and next to, the advancing path of the maneuvering forces. The two main arrays (GPR and metal detector) will produce data which will be combined to analyze readings in real time, minimizing false alarms from non-threatening materials such as rocks, wood and other debris.

An onboard IAI-manufactured electro-optic payload with day/night cameras will provide remote operators with situational awareness and enable visual surveillance from a safe distance. On-board navigation systems allow the vehicle to travel along a precise series of preprogrammed or operator designated waypoints and record and transmit the exact location of discovered threats.

MIDS will carry a remotely-operated weapon system slaved to the electro-optic payload for self-defense against enemy combatants or for detonating threats on the operator’s command. The system will also be equipped with a small dozer blade able to clear obstructions, and a lane-painting/marking system for designating both a safe path for following vehicles/troops and for outlining the location of discovered threats.

All development and construction of the technology demonstrator is taking place at the company’s Beer-Sheva facility. The demonstrator is slated to be ready for field testing by the end of 2014.