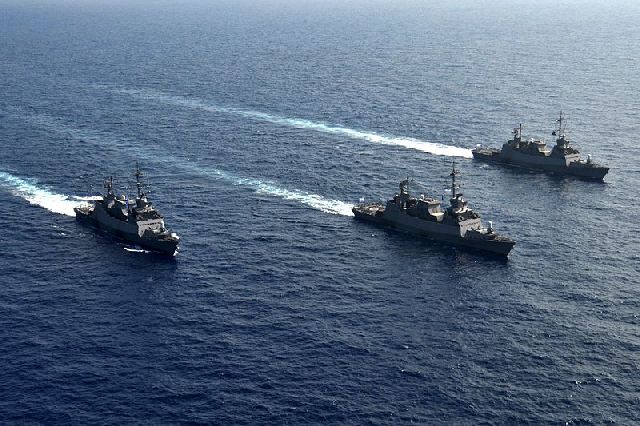 The Israel Navy is preparing a plan to procure four missile corvettes to protect the gas rigs in Israel’s exclusive economic zone in the Mediterranean. The ships cost an estimated $400 million and systems that will be installed on them cost an additional $200 million. A senior Navy officer says that the plan is due to be presented to the government for approval in a few weeks. The corvettes were priced after a long process in which the Navy obtained quotes from several foreign shipyards, including in Germany, South Korea, and the US. Because of the high cost of the Saar 5-class missile corvettes, four of which are in service with the Navy, the IDF decided to procure ship platforms designed for civilian use. This process should substantially lower the ships’ cost, since a Saar 5-class missile corvette reportedly costs $400 million.

A senior IDF officer says that for the cost of one missile corvette, it will be possible to procure four large civilian ships and then train the Navy to respond to security challenges in the Mediterranean. The plan calls for converting the civilian ships to warships, which will carry a wide range of offensive, defensive, communications, and warning systems developed by Israeli defense companies. The Navy estimates that 4.5 years are needed from the signing of a contract to bringing the ships to operational use, with the first ship delivered within three years.

“The new ships are a fantastic answer to our needs to meet the new challenges in the maritime space, ” says the officer. “They can be used for routine protection of Israel’s economic interests in Mediterranean, and when needed, to use them in combat operations. We’ve examined how other countries are protecting their maritime interests, and found that they all use this method.”

A Navy expert familiar with the complexities of protecting offshore rigs says, “For the IDF, this is a reasonable demand to respond to a need in a huge region, where interest has grown greatly in recent years.”

In this article:idf, Finance, Mediterranean