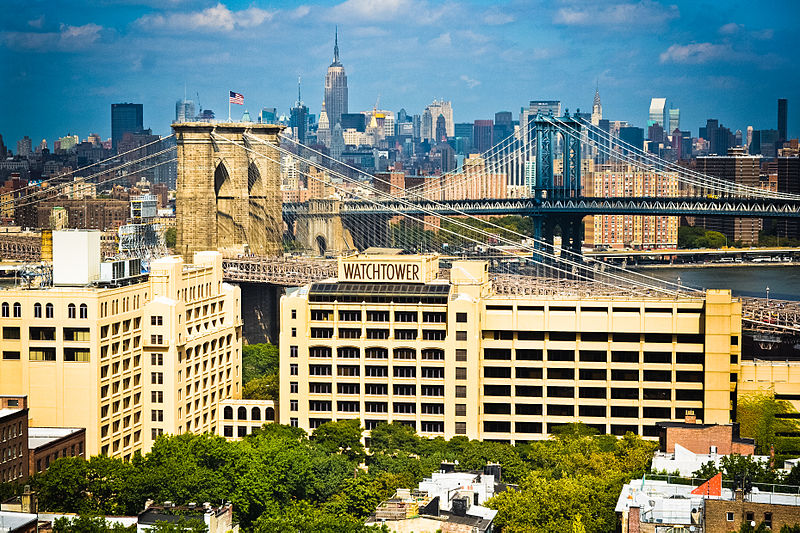 The “Watchtower” properties in Brooklyn

Last week a partnership including Jared Kushner, a New York real estate developer and technology investor married to Donald Trump’s daughter, closed the deal, announced earlier, to buy five of six properties in the “Dumbo” neighbourhood of Brooklyn from the Jehovah’s Witnesses in a US$375 million deal. He said afterwards he and his partners plan to convert the former warehouse/office structures into a high-tech hub.

The “Watchtower” properties in Brooklyn are being sold by the Jehovah’s Witnesses as it relocates its headquarters upstate. An agreement to sell the sixth building will close in 2017. The properties are named after the official magazine “The Watchtower” of the religious group, which became the official means of disseminating its religious teachings late in the nineteenth century.

The 1.2 million-square-foot complex will be at least 50% offices when the redevelopment and renovation plan is complete said a source, according to the Wall Street Journal.

The properties are located close to the Manhattan and Brooklyn bridges in Brooklyn and their future has hitherto been endlessly debated as to whether the “Dumbo” district as it is known – which is an acronym that stands for “Down Under the Manhattan Bridge Overpass” should stay a primarily commercial district or even become a luxury residential area due to its proximity to Wall Street. Well now it is likely to be both with loft style offices and some loft apartments as well, though its seems at least a bare majority of the space will remain commercial. 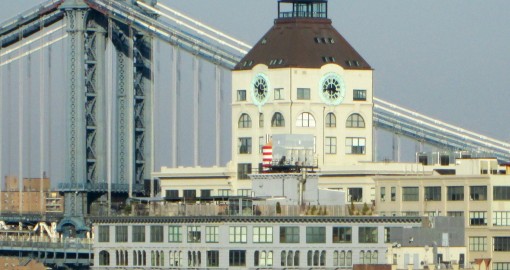 Dumbo, an acronym for Down Under the Manhattan Bridge Overpass, is a historic neighborhood of Brooklyn

Jared Kushner, CEO of Kushner Companies, said that in making the purchase he and his partners in the project Aby Rosen’s RFR Realty and LIVWRK Holdings, a real-estate startup by Asher Abeshera, a former Two Trees executive, had debated whether the complex should include more housing or office space. “We would make more money if we did the whole thing as residential, but we would have less fun, ” Mr. Kushner said.

The decision to focus more on office space is also likely going to be an easier sell to the city council, who to put it bluntly still need the commercial property taxes and the jobs that go with it. Mr. Kushner and his partners will need to rezone any parts of the property they want to convert to residential use, which requires approval from the local City Council so they will clearly be emphasizing their flexibility on the issue. One guess as to how these things get done is that the predominantly commercial space will go in first, and the final building will come on strong as a primarily residential component towards the end, boosting the residential averages – at then much higher prices perhaps.

Gentrification is the name given to the process of upgrading an area from a given set of land use to one that is more substantial and, of course, usually much more expensive. Given its location close to Manhattan this neighbourhood has been a prime candidate for redevelopment for a long time. Originally one of Brooklyn’s primary manufacturing districts it went into a deep decline in the nineteen seventies when all the manufacturing jobs were lost and warehousing and office space subsequently became the central form of land use in the neighbourhood.

This new opportunity comes now as the Jehovah’s Witnesses are moving their headquarters upstate and selling the substantial portfolio of real estate they had built around their Dumbo HQ. Earlier this year they had also sold a smaller piece of it to Urban Realty Partners, led by Shelly Distokin for US$30.6 million.

The history of the Jehovah’s Witnesses site itself mirrors much of Brooklyn’s industrial history. The Jehovah’s Witnesses had even located their primary printing facility there, making hundreds of millions of Bibles, books, magazines and pamphlets, according to Richard Devine, a church spokesman. The Witnesses closed its printing operations in the city ten years ago in 2004 though, moving them out to the suburbs.
In Kushner’s new project he and his partners will now implement a thorough, US$100 million, renovation of all the existing buildings, make parking spaces to secure up to 5, 000 bicycles, create outdoor roof terraces, and develop 150, 000 square feet of retail space intended for mostly locally-based retailers.

Jared Kushner said they would also work with the city to try to create some pedestrian plazas as well. “We saw these buildings as an opportunity to really create a great campuslike environment, ” he added.
Their plans for the complex will solidify the transformation of Dumbo – one of Brooklyn’s existing office districts – from its status in the early 2000’s as a cheap neighborhood for broke-startups into a more high-profile office destination that competes with neighborhoods like Flatiron and Chelsea; in other words gentrification at work.

“Dumbo will become more official, more formal and more professionalized by these tenants, ” said Chris Havens, a commercial broker who worked for five years at Two Trees Management Co., the largest property owner in the area to the Wall Street Journal. “It’s turned from a village into a town.”

As to Two Trees itself, the major existing competitor for space in the neighbourhood, David Lombino, Director of Special Projects for Two Trees said “We’re at zero vacancy. If Dumbo continues to become a home for these types of company, I think supply contributes to that perception”… “A rising tide lifts all boats.”

After Kushner’s redevelopment is complete if commercial office rents in the neighbourhood should double from their existing US$25 per square foot to as much as US$50 per square foot, this will indeed yield handsome profits to both the developers of the new project and existing landholders alike. No wonder Two Trees are calm about the prospect.