Selig to end his tenure as baseball commissioner in January 2015 after more than 22 years in the job. 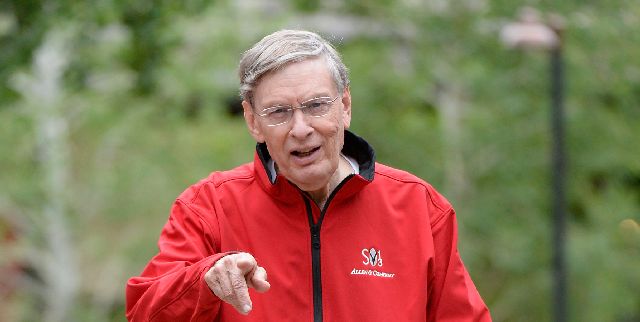 Bud Selig, now 79,  has dismissed speculation that he would seek another term as commissioner , stating in his own emphatic fashion that he intends to step down from the basketball’s top job. A post that he has held since July of 1992, and will finally be walking away from in January 2015.

Many sports pundits predicted that Selig would seek another term  so that he would break the record of the longest running incumbent, Kenesaw Mountain Landis, who was MLB commissioner from 1920 to 1944. However it appears that Selig is happy to call it quits at the ripe old age of 80, as he is already a year older than Landis was when he passed away during his tenure.

And it would be impossible to say that during  Selig’s time at the top of the sport’s legislature, he didn’t face a lot of challenges or  make some significant changes.

Changes  which included  splitting each of the regional leagues into three divisions from two, adding the wild card element as the widely accepted additional rounds of playoffs, initiating the  World Baseball Classic, as well as displaying a knowledge of the digital world with the introduction of the MLB.com website.

On the downside, Bud Selig was in the hot seat during the  7½-month long MLB  strike of season 1994-95. A strike  that led to the cancellation of the MLB  World Series for the first time in the association’s  90 year history.

On announcing his decision to stand down, Bud Selig reiterated his feelings of privilege to serve the game he has loved throughout my life, going on to stress  that he intends continuing its extraordinary growth whilst  address several significant issues during the remainder of his term.

“I am grateful to the owners throughout Major League Baseball for their unwavering support and for allowing me to lead this great institution. I thank our players, who give me unlimited enthusiasm about the future of our game. Together we have taken this sport to new heights and have positioned our national pastime to thrive for generations to come. Most of all, I would like to thank our fans, who are the heart and soul of our game.” Selig summed up.

Selig’s  association with basketball started in 1970, when  he bought the Seattle Pilots out of bankruptcy and transferred  the team to Milwaukee, his home town, promptly renaming them the Milwaukee Brewers, the defunct  minor league team he had followed in his youth. Under Bud Selig’s the Brewers won the 1982 World Series as well as several minor trophies  during his ownership period.

Bud Selig’s extra ordinary administrative skills soon captured the attention of the other MLB franchisees, and he was part of a group of disgruntled owners that forced acting  commissioner Fay Vincent to resign in 1992

Selig little suspected that he would be asked to take on the role of  acting commissioner, eventually agreeing before accepting the post on a permanent basis in 1998.

MLB franchise owner’s  have consistently given Selig their full backing, refusing to contemplate that he would stand down from the post. Bud Selig’s  financial stewardship of the Association has  seen revenues more  than quadruple from when he first took up the post, while  the average MLB player’s  salary has tripled.

In this article:Finance, Major League Baseball