Oracle Team USA (Oracle) came into today’s final race bursting with adrenalin and full of self-belief. From an 8-3 down position on the race course they had fought their way back into this match and astonished Team New Zealand (TNZ), who probably felt for some time they had this in the bag already.

Instead, by winning all of the last seven races Oracle led 10-8 on the water this morning, and the series stood at 8 all in match points after deducting a 2 race penalty Oracle received for pre-season rules violations. Just one more day therefore and one more race…. If the weather and the wind cooperated we all expected a dramatic finale, one worthy of this longest ever America’s Cup series. 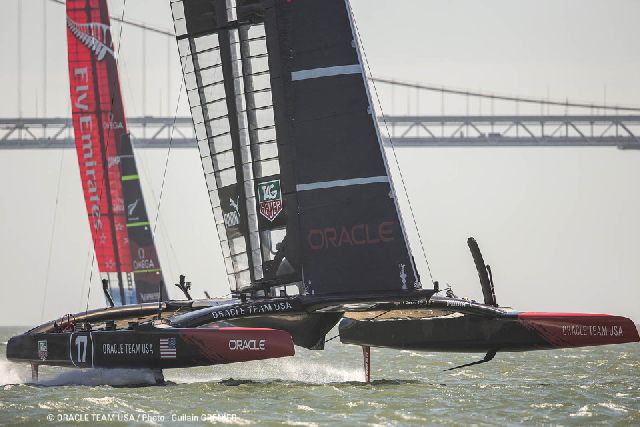 And so it turned out, with Oracle again dominating the start and then the race, to successfully defend the America’s Cup series, winning it now for the second time in, and for, thehigh level sailing from now on. Once you get hooked on speed it is very hard to give it up and go back to the older, slower, more gentlemanly ways to be sure. The highest velocity out on the race course was 55 miles an hour, by TNZ on a down wind run. In most parts of the United States and Canada the official speed limit on their interstate highways is exactly that – 55 mph.

You will find our race report again below with a blow by blow account of what took place on this historic day. Do read on and enjoy. 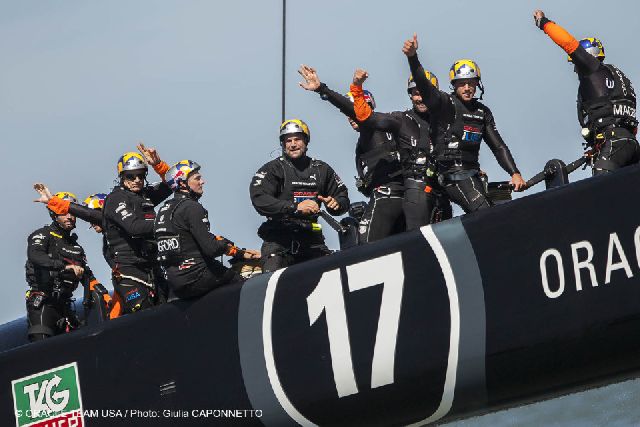 In the media room after yesterday’s racing, both of which were won by Oracle, the two skippers sat down with reporters and set out their stakes in the sand for today’s showdown:

“We do believe we can win, we’ve known we can win this thing for a long time, ” said TNZ skipper Dean Barker. “It’s one thing to talk about it and another thing to do it. We have to do everything right and sail as well as we can. We’re going to prepare as we have been and we have confidence we can win this…”

“I think we are the underdog, and I’m going to keep running with that and use that energy for tomorrow, ” said Oracle skipper Jimmy Spithill …“The exciting thing for me is seeing how this team has gelled together. Sometimes you need to face that barrel of the gun to come together. You can get wobbly in the knees or you can look into the barrel. Every day we’ve managed to step it up more.” 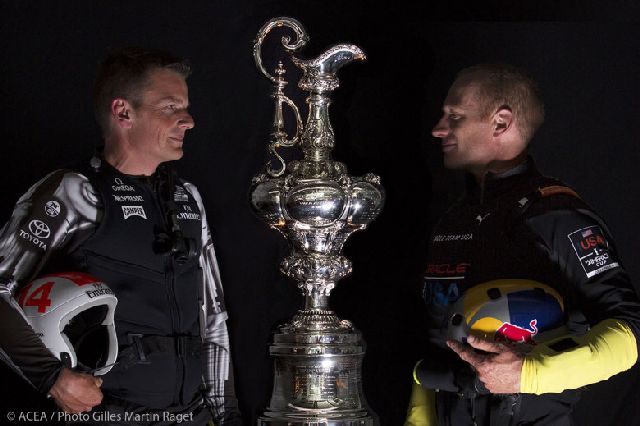 Fifteen minutes to go in the race of the century, a beautiful day again, with the wind now blowing at about 18-20 miles an hour, for the moment comfortably within the limit prescribed for today in today’s moderate flood tide conditions.

At the five minute mark we see the boats getting ready to go into the pre-start box where they will manoeuvre around each other warily till the count down to zero.

At two minutes TNZ now takes the port entry into the box 10 seconds ahead of their opponent.

Just the hint of a chop and these boats are going to go fast today; 1 minute to go and TNZ are hugging the lower lay line to the mark and will try to keep it while Oracle are higher up trying to cross over the top of TNZ and take the lead right at the start. 10 seconds, 5, 0 and off we go with the two boats absolutely side by side – better for TNZ who will take priority at the mark with an overlap and go around in front as Oracle hits a wave, but Oracle are not taking this lying down and are gybing over just behind TNZ and now have the windward side downwind – great tactics. 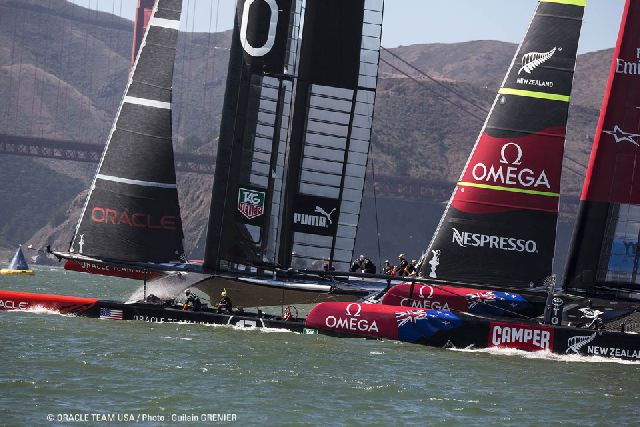 Only 40 metres behind and Oracle is catching up to TNZ now, and as they both fly down the course its a drag race as Oracle gybes around the back of TNZ again to escape the windward boundary but still two boat lengths behind. Who will make a mistake first? the second mark is coming up and can Oracle force a split so they can sail away from the boat in front without being covered. Now TNZ still 65 metres in front and they go through the mark – TNZ head for Alcatraz and Oracle head for the shore with a split.

Who will be faster upwind today. But suddenly Oracle are now 20 metres in front though one tack behind… now they are 69 metres in front. We are now going to find out who is the faster boat the rest of this leg. As the boats cross TNZ win back the lead having starboard advantage. But it closes again with TNZ tacking with the boats far apart. Oracle will have starboard advantage on the next cross in this tacking duel; who will be in front?

Oracle passes in front, and are now 75 metres in front after just a minute and a half. It’s all to play for now with the boats 30 metres apart crossing – and Oracle cross well in front even on the port tack so if they keep this up they can win the race, though the next ten minutes will be an eternity. 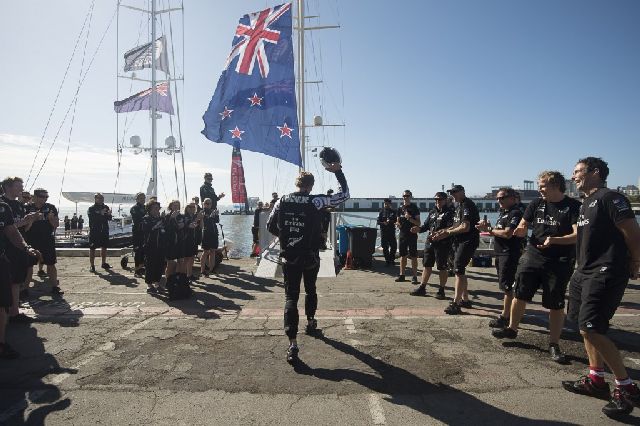 Emirates Team New Zealand getting ready one more time – either to achieve victory or maybe to walk the plank if it is a defeat …..

And Oracle cross again in front, but there are only fractions in it at these speeds. Oracle are foiling upwind at 34 miles an hour at the moment and now have a 170 metre advantage as the wind is building higher; another advantage for Oracle who sail better in the stronger winds. If they make it around the top mark the wind limit won’t count afterwards, so let’s keep our fingers crossed. Oracle now 260 metres in front and continuing to press the hammer down on the New Zealanders.

Oracle prepare to approach the third mark soon and it will then be a huge sprint to the finish downwind. Right now though Oracle in front by 26 seconds as they go round the top mark ahead and turn for home without slowing down despite the heavy gusts. Oracle 480 metres ahead now and going for home. If they don’t make a mistake, it will be 8 victories in a row and Oracle will successfully defend the America’s Cup and they increase their lead to 670 metres now and the final mark comes into view in the distance. Alcatraz island looms over on the left; too bad it was once a prison.

Now Oracle comes through the final mark and reach over to the finish line on what is a historic occasion. TNZ comes through the mark 37 seconds behind. And Oracle Team USA WIN THE AMERICA’S CUP by 43 seconds from the challenger Emirates Team New Zealand. 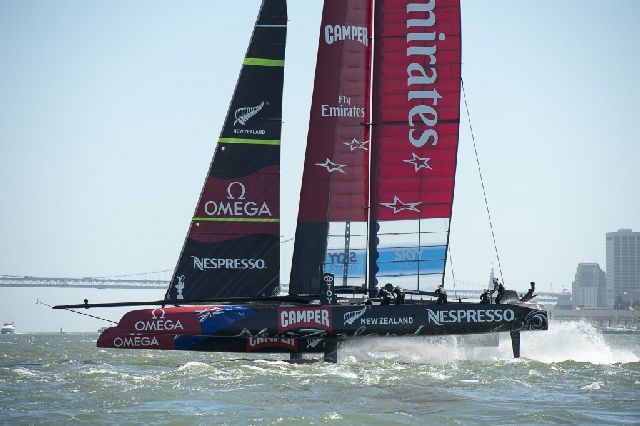 So that is it folks. Larry Ellison, Russell Coutts, Jimmy Spithill, Ben Ainslie and the whole Oracle Team USA group can go away away happy, excited and hugely stoked by this outcome.

Emirates Team New Zealand, the losing team, will have a huge hang-over tomorrow no doubt, but in this class of professional sailor they are all nothing if not resilient and will pick up the pieces, learn from it all and come back stronger the next time – whenever “the next time” might be.

The sport of sailing has been de-mystified for the rest of the world too with this event, with the benefit of some incredible video and illustrative special effects technologies, and the televised experience has been fantastic. Larry Ellison and his group of strategic planners for defending the series took a tremendous amount of heat along the way, but in the end they over-delivered on everything they promised and, as a bonus, also kept the cup too….