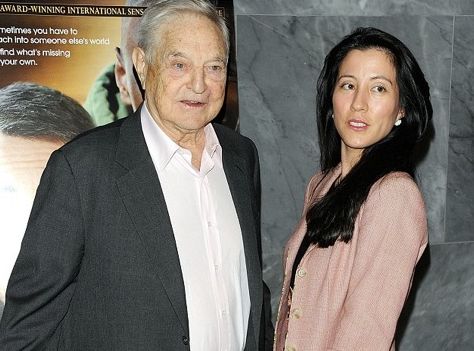 Yesterday billionaire George Soros, 83, married Tamiko Bolton, 42, in a private ceremony on his Bedford, New York, estate. This is his third marriage and Tamiko, who he met originally in 2008, has been married once before. The couple became engaged last year and have now officially tied the knot. Tamika is an education and health care consultant with an MBA from the University of Miami. The wedding was attended by his five children from pervious marriages.

Tamika’s wedding dress was designed by Lebanese American Reem Acra, who has previously dressed celebrities such as Angelina Jolie and Jennifer Lopez. Her wedding band came from jeweler Graf, and the ecumenical ceremony was presided over by a Federal Judge – Judge Kimba Wood. 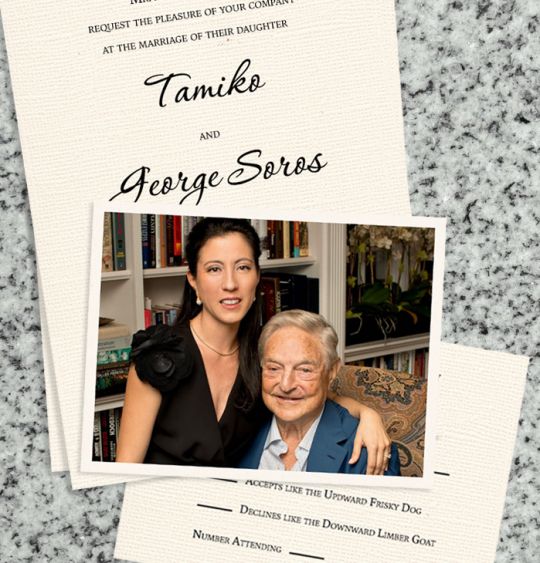 The wedding celebrations had started already on Friday with a dinner and then a private showing at the Museum of Modern Art of the new Rene Magritte exhibition of his surrealist works, which opens to the public only at the end of this week on September 28th.

Soros’ Bedford estate used to belong to Michael Crichton until he sold it to Soros ten years ago. The reception for more than 500 guests after the wedding took place at the Caramoor Center for Music and the Arts, a Westchester County complex known for its Italian Renaissance-inspired buildings and lush gardens. It featured music by Hungarian composer and conductor Iván Fischer, a friend of Soros, which was presented with the Budapest Festival Orchestra.

Guests from many celebrity walks of life were invited, including World Bank President Jim Yong Kim and a number of foreign leaders, including Hendrik Toomas Ilves, President of Estonia; Ellen Johnson Sirleaf, President of Liberia; and Edi Rama, Prime minister of Albania. Christine Lagarde, Managing Director of the International Monetary Fund, and Bono of the rock band U2 also attended together with fellow titans of the hedge fund world, Paul Tudor Jones and Julian Robertson. From the political realm those invited included Minority Leader of the U.S. House of Representatives Nancy Pelosi of California and Lt. Gov. Gavin Newsom of California, both Democrats.