The story so far: Oracle Team USA have been totally out-gunned so far in this series, going 6-1 races behind Emirates Team New Zealand on the water, with an additional 2 race penalty against them, going into today’s crucial two races. Today it was another story though with Oracle easily winning the first race. The second scheduled race was actually cancelled half way through due to high winds, so we start all over agin tomorrow with TNZ 6-2 ahead on the water. Do read on for the full story. 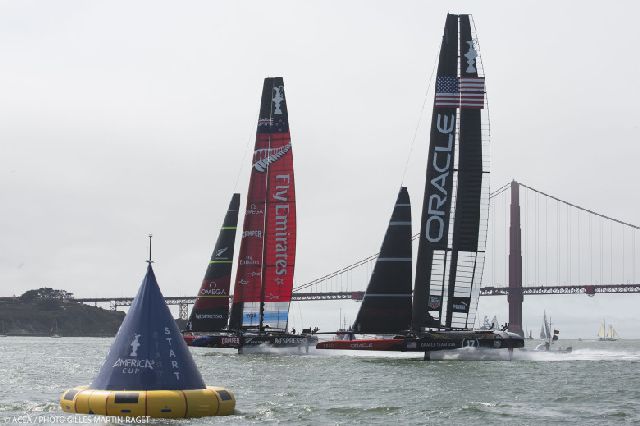 Here we are again at the America’s Cup action in San Francisco Bay. Thursday’s racing had been a whitewash in favour of Emirates Team New Zealand (TNZ) and the whole series could end as early as tomorrow if Oracle Team USA (Oracle) don’t find some serious improvement in their upwind speed in today’s racing. On Thursday the Oracle team had still looked slow where it counts, when tacking upwind. Theories abound as to why this is so with some commentators putting it down to the lack of volume in the nose of their needle shaped “amas” or hulls, losing them buoyancy when leaning only on a single hull in a tacking situation. No doubt there will be port-mortems galore after the series is over, but for today let’s just hope we can see a close race with both teams out giving their 110% best! 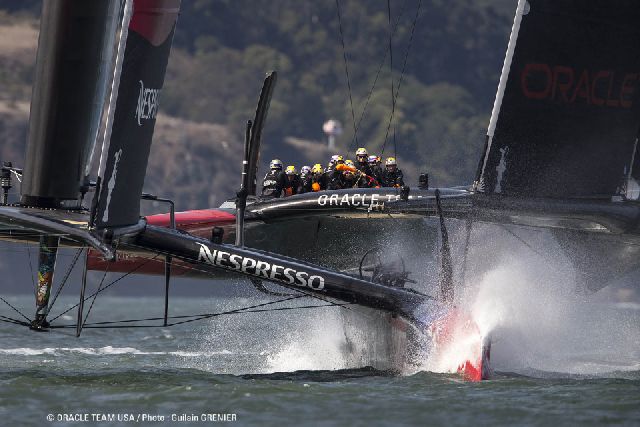 You don’t really want to get any closer than this….  / Guilain Grenier​

On Friday’s rest day Oracle were out again on the water practicing and modifying their boat a bit, trying to find its sweet spot. For today there will be no further crew changes and English Olympian gold medalist Ben Ainslie will again partner skipper Jim Spithill in the back of the boat as tactician. Ainslie has already acknowledged that sailing a big 72 foot catamaran with a crew of eleven is a good deal harder than sailing solo, even in the Olympics, where you only have your own instincts, skill and reflexes to worry about. In a way this series is a learning experience for him in what is likely to be the forerunner for future America’s Cup challenges where he may then be totally in control of a team. We will have to wait and see for that. 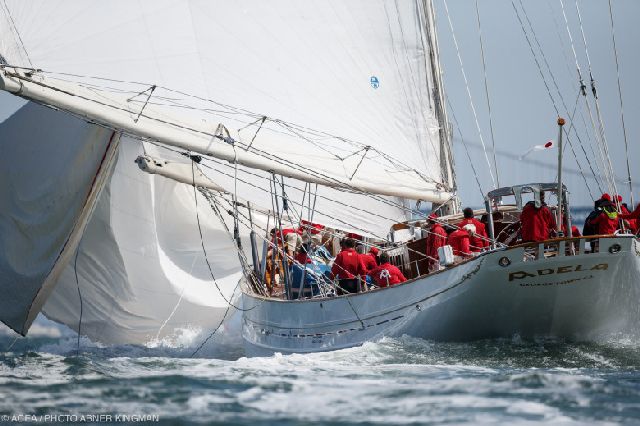 A more traditional way to get around / ​Abner Kingman

Yacht designer Designer David Pedrick who once worked for the great Olin Stephens said on the America’s Cup web site after watching these amazing races…“The whole idea of foiling cats at this scale is incredible, ” Pedrick continued. “It’s not the invention of foiling or foiling cats, but to put it at this size and performance, with very powerful wing rigs and then the balance issues of getting the boats to fly on their foils… they’re just incredible machines that are so far beyond what sailing has ever done before.”

Pedrick believes the action captivates the attention of the younger generation and the broader non-sailing audience.

“In the case of the hydrofoils you need an extremely lightweight platform; it can’t be ballasted, so the multihull platform is necessary, ” Pedrick said. “From a rig stand point, the weight and supporting it, being able to stay the rig outboard far enough is something where the wide platform of a catamaran or multihull is the way to go.” 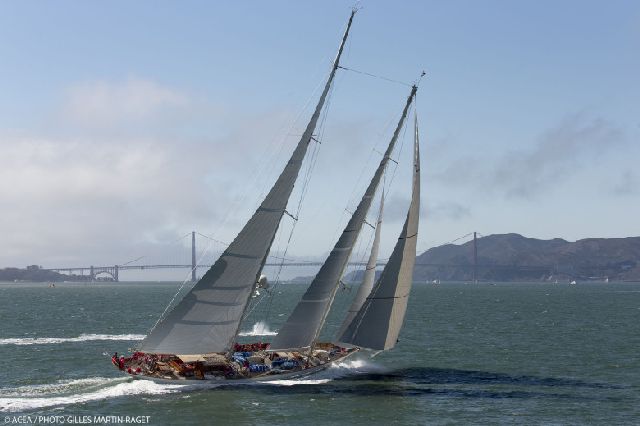 The America’s Cup web site tells us the wind is forecast to be near the top end of the range at 21-26 miles an hour and the second race could well bump up against the wind limit. Compounding the problem today there will for the first time in the series be an ebb (outgoing) tide which also impacts the sea states the boats encounter.

“The current flows quite differently on various parts of the racecourse, ” said Regatta Director Iain Murray. “We see that with the yachts chasing the cone in behind Alcatraz in flood tides. Likewise, on the ebb tides, there’s a compression on the front side of Alcatraz, so there’s quite steep, short waves there, particularly in big ebb tides. With the compression coming around Alcatraz we can easily see 4 knots. When Oracle Team USA capsized last year there was 6 knots there. Can be quite substantial seas off Alcatraz, and it has quite an effect on racecourse.”

So with higher winds than in the previous races there could be an impact on the relative competitiveness of the two boats… lets get out on the water and see what’s going on before the start of the first race:The race starts at 1.15 pm Pacific Time – in about ten minutes and the two protagonists are now getting ready to sail into the “box” of water in front of the start line. The wind is pushing past 20 miles an hour and lots of high tech warfare is about to explode as these yachts take off – both using only the smallest of soft jibs to help them go about in the tacks. And we are racing on San Francisco Bay! TNZ is a nose in front heading for the first mark as Oracle had to back off after trying to be too aggressive and so they head off downwind very close together with TNZ just in front. 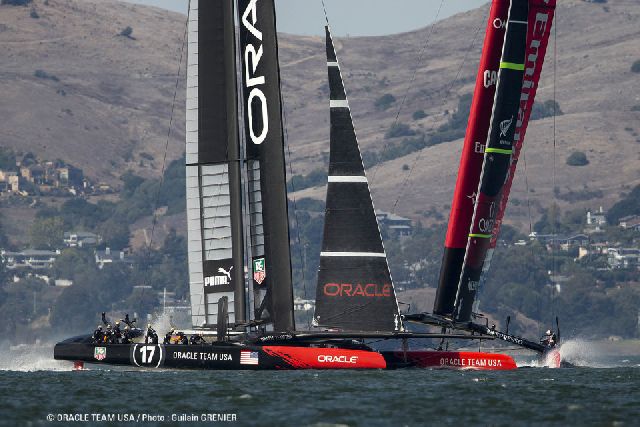 Oracle make their first downwind gybe to find some sea room and are now just 100 metres behind, both boats going 45 miles an hour. Oracle picks up some speed and are closing the gap a little to only 70 metres behind. TNZ are going very smoothly though and are just not making any mistakes, as they both close on the second mark ready to turn back upwind again with TNZ 6 still seconds in front. The current today has eased up so should not impact the race so much today going back upwind. Oracle are tacking much better too today, popping their weather hull out of the water quickly after changing direction without losing speed; all that training yesterday has paid off. Still 87 metres behind though but at least they are easily holding their own today.

The two boats are now tacking out of phase which makes tacking easier to do without fouling the other boat, so Oracle has now closed the gap again to just 48 metres. Well done again, as Oracle now goes in front by a hair! The next time these boats cross who will blink first? Oh dear the hull went down for a moment and Oracle lost speed now they have to do it all over again. The boats are still only 20 metres apart though – we really do have a horse race.

Oh wow – TNZ almost capsizes as their wing sail refused to tack and the catamaran goes over on its side, they save it but slow down radically and Oracle goes in front and zooms into the lead. TNZ may have a hydraulics problem which is not good news for them if they do, and Oracle goes through the third gate 300 metres in front. Now they have a good chance to win this race. The down wind leg is now a 45 miles an hour confidence building exercise for Oracle, who have turned this series around and come through the final mark with a huge 48 second lead and head for the finish, crossing the line the winner of the first race by 52 seconds. Well done; what a turn-around. 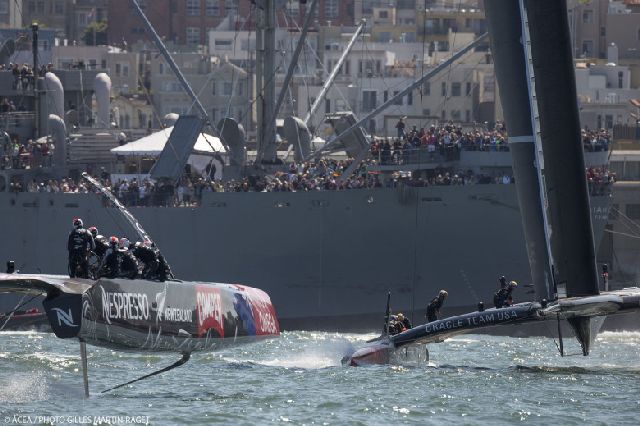 At 45 miles an hour it is important to know how to manoeuvre  well in close quarters when facing a large obstacle! / Gilles Martin Raget​

As we get ready for the second race the wind has been freshening. The TNZ boat seems to be alright after their near-capsize though their crew may still be a little bit rattled after their narrow escape from capsize in the last race, though they still brought the boat home at pushing 55 miles an hour. Oracle will likely be aggressive at the start again to confirm their last result was no fluke. We now hear the start is postponed by fifteen minutes as the wind has been up against the race limit the last few minutes… and the countdown now begins as the wind has dropped just enough to have racing again.

The two boats are in the pre-start box with 90 seconds to go and both boats are keeping away from each other. Ten seconds and away they go neck and neck though TNZ is on the correct side to make the mark first and around they go first downwind 3 seconds ahead of Oracle. Lets see who is faster now. Up to 45 miles an hour again with TNZ 70 metres in front but now Oracle just sails right up to them them catching up. TNZ does a blocking gybe and Oracle responds. Both boats are up on foils with Oracle clocking 58.5 miles an hour! And Oracle splits at the mark so the tacks are out of phase and they can go after TNZ on the upwind leg.

The referees have now ordered the abandonment of this race because of the wind coming up too high. Ouch! Bummer… so this race will be re-run again tomorrow. The sailors on both boats will not be pleased as there was terrific racing going on and the adrenalin was flowing. 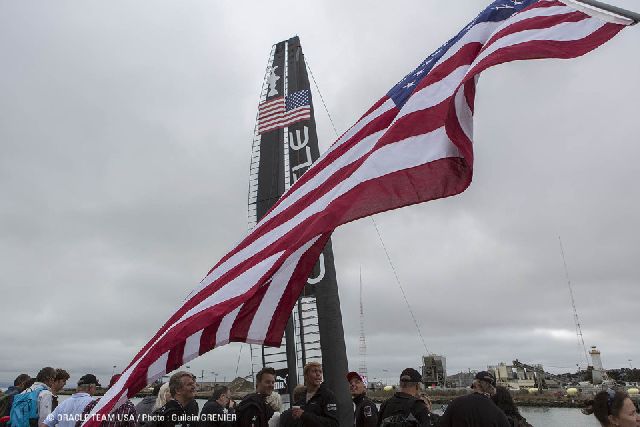 So the Stars and Stripes won today; plenty for Oracle to cheer about / Guilain Grenier​

So there we have it; after today’s only race to finish we have one more win for Oracle. So now they still trail TNZ by 6 races to 2 out on the water, ignoring the 2 race penalty they still have for rules violations last year. This means the charging New Zealanders still have work to do as they aspire to win the 9 races they need to win the series. Jimmy Spithill said after the first race all the work they had been doing modifying the Oracle boat was paying off.

The next two races scheduled will be races 9 & 10, which will now take place tomorrow, Sunday September 15th, with the first of them again kicking off at 1.15 pm Pacific time. You can check out the daily schedule for the rest of the series on an ongoing basis at The America’s Cup official web site: www.americascup.com. We will of course continue to cover the series here at Jewish Business News, so keep visiting the site.