Gandel has recently sold his 56-meter luxury yacht, Galaxy, for around $30 million, with news available if the Galaxy will be replaced, or if that ship has sailed. 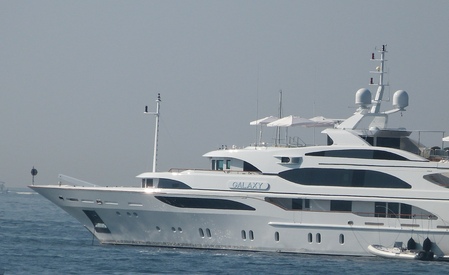 John Gandel is known as a man that likes to keep to himself, and that may well be the reason why he enjoys spending so much time on the ocean wave in the comfort and privacy of his yacht. Or  has spent would be a more accurate description, with Gandel recently accepting €20 million ($28.7 million) for the Galaxy, with the sale being brokered by Burgess Yachts, based out of London, England, who have acted as middlemen for some of the largest yacht sales in the World.

Gandel is bound to miss the Galaxy, built by Benetti, the renowned Italian shipbuilder. And he will have every reason to , with Benetti equipping  the Galaxy with all the home comforts any billionaire seafarer could wish for, including a state of the art gym, a luxurious home cinema, its own fully equipped bar, on deck hot tub among a host of other extras. And if Gandel ever got bored, all he needed to do was click a switch or two, and the Galaxy’s sun deck would rapidly convert itself into a helipad.

Galaxy  is capable of accommodating  up to 14 people in comfort, whose every need will be taken care of by a crew of 15, who will pilot the yacht at a top speed of 16 knots, thanks to its Caterpillar  3512B C HD engine capable of providing 1850 horse power.

With Gandel possibly in the market for a replacement for the Galaxy, luxury yacht manufacturers and brokers around the World are bound to be sitting by the phone, waiting for a phone call from a man with an Australian accent.

John Gandel (born 1935), an Australian businessman, is a property developer who made his fortune in the development of commercial real estate, in the main, shopping centers located in Melbourne, Victoria.

Gandel was born and raised in Melbourne, Australia. In his mid twenties, during the austere time of Australia in the fifties, and working in partnership with Marc Resen, his brother-in-law built the small family business into a retail empire numbering more than 200 stores.

In 1983, John Gandel and Marc Resen went their separate ways, with resin buying out Gandel. Gandel promptly invested the capital he received to invest in commercial property, particularly shopping centers with an estimated value today of around $3.5 billion Australian dollars.

Well known in Australia for his philanthropic deeds, in particular aiding medical causes and the arts, John Gandel donated A$7.5 million in 2010 to the National Gallery of Australia and in the same year A$1 million to pay for damages caused by the devastating bushfires that devastated the state of in Victoria, recalling how their own home was destroyed by fire 20 years earlier.

Handel has been the recipient of one of the highest awards from Israeli institutions- an honorary doctorate of philosophy from the Tel Aviv University. The doctorate, the highest honor awarded by the university, was in recognition of Gandel’s business standing, broad leadership roles and philanthropic support, both in Australia and Israel. John Gandel is also a patron of the Gandel Institute for Adult Jewish Learning situated within the Hebrew University of Jerusalem.