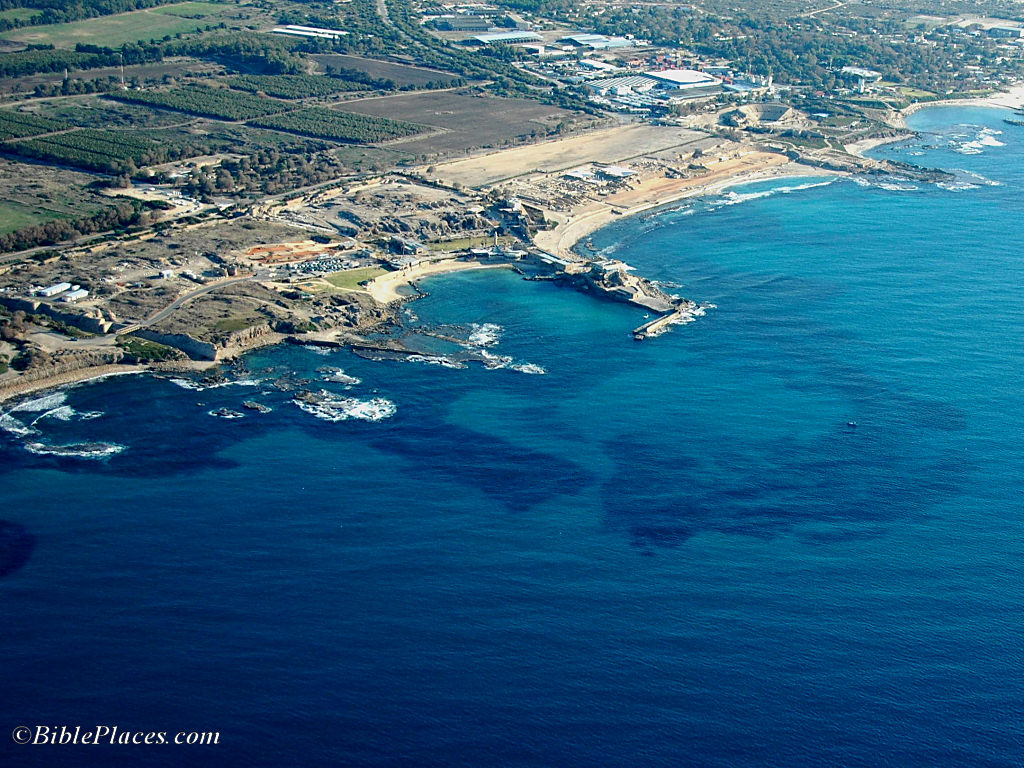 Caesarea aerial from northwest at  BiblePlaces.com

A recent report in the Marker, in Hebrew, says that real estate transactions are way down in Caesarea and that there is currently some kind of Mexican stand-off between sellers and buyers leading to a stalled market and possibly portending a trend to lower prices.

One doesn’t need to read the Marker to understand that in recent times Caesarea housing has been over-built in certain areas of the town.

However there are in fact two completely different Caesareas. First there is the very exclusive original central core, which runs north south and hugs the coastline and the beaches. One would once have included in this core category as well part of the town developed originally on the west side of the golf course – i.e. as it was before the course was brutally remodeled in the last three or four years to make room for an additional new housing “cluster”. “Cluster” as the term is used here in Israel, is equivalent to the terms “neighbourhood” or “sub-division” or “district” for readers from other places.

Parts of the rest of the town though have clearly experienced a speculative bubble – and especially the highly touted new Golf cluster developed on the other, eastern, side of the golf course. Other more outlying Caesarea neighbourhoods are in some ways in reality just dormitory suburbs possessing no inherent advantage, either locational or of great natural beauty. One could say this is especially the case now with another new, vacant, cluster still to be built upon, that will enjoy splendid views of the Hadera Power Station in exchange for rapid access to the highway; something the developers clearly hope commuters may not care about.

In both cases, the Caesarea Development Corporation (CDC) seems to have placed quick land profits ahead of sustainable luxury home development in its objectives. In the first case, as well, they also destroyed what in this writer’s opinion had once been a quite lovely golf course and turned it into something of a caricature of its former self – now homes on both sides of the, famous-designer-built, new golf course seem to be able to peer intently into each other’s bedroom windows – with a resulting loss of amenity for those original home owners on the older western side of the course too, who once had pristine unimpeded views over a much wider area.

In addition this initially very highly priced, and densely built, new Golf cluster was squeezed in right beside the main highway from Tel Aviv to Haifa. This was done without first putting down, expensive, sound absorbing, roadway on the 3 or 4 kilometres of the immediately adjacent highway. In contrast this is something that was done a long time ago in the competing Herzliya and Kfar Shmariyahu luxury neighbourhoods. This certainly shows and now the traffic noise can be intense all day long, and during many of the evenings as well, for the proud new home owners there.

As a result some of these new property owners in the Golf cluster may suffer losses at least for a time, as people conclude the Emperor there clearly has no clothes. When there is no real amenity, sooner or later you cannot just pretend that there is. 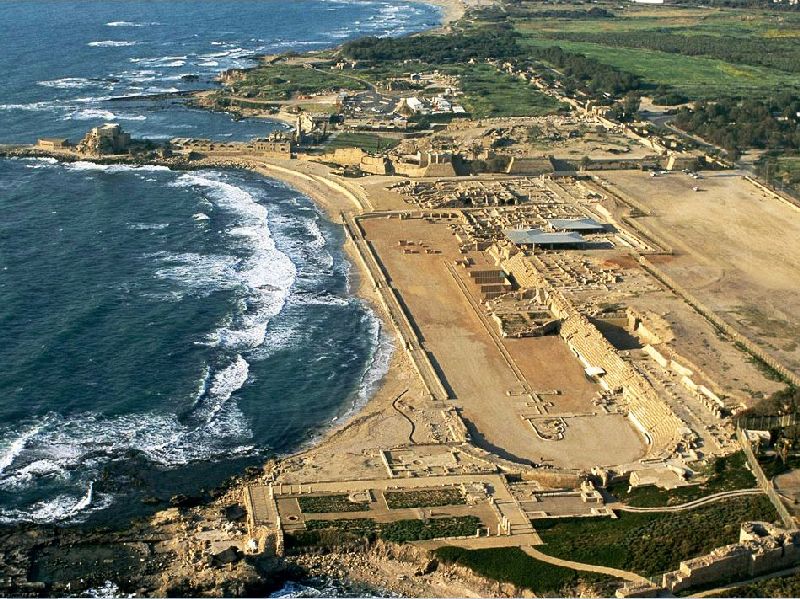 Caesarea was built by Herod the Great

As for the CDC itself, which is a constitutionally unique entity as a joint venture between the Government of Israel and the charitable Rothschild Foundation, it is a self-governing profit-seeking entity that determines its own land development policies, without the democratic inconveniences of local voter participation or mayoral interventions. Whilst its goals are doubtless extremely worthy, it is at least possible their implementation can sometimes stray from the principle of considering other public goods than their own.

In substantial and serene contrast to all of this, in the central core area of Caesarea itself, homes built there on, or close to, the first line to the sea, including those next to a small forest that also abuts part of it, essentially constitute a much more restricted, limited, niche that cannot be replicated anywhere, so values are real and therefore may not suffer nearly as much from economic fluctuations. Even so, it may now still take quite some time for overall liquidity to be restored to the local market, for obvious external economic reasons that impact the general real estate markets themselves.

The fact is that in the luxury and near-luxury segments Caesarea is very much a second-home market, and like all predominantly second-home markets, such as Muskoka which is Toronto’s equivalent luxury country resort, or the mountains of the Laurentians for Montrealers, using the two great metropolises of Canada as example, these suffer disproportionately when their own parent conurbations are in economic trouble. Then such second-homes are seen for a time in the business cycle as potential sources of liquidity, rather than places to make immediate additional new investments.

During such slow-downs, housing development in the centre of a conurbation is generally preferred for a time, too, as investment vehicles using whatever rationalizations are employed by analysts at the time, and then when good economic conditions return the opposite gradually occurs all over again.

And, at least for the moment, the important international buyer has gone missing in action in relation to Caesarea too, as the world progressively fell apart economically during this severe double-dip recession, and investors pulled in their horns everywhere.

None of this is rocket science; it has happened before, it will happen again and simply requires careful understanding. However what goes around comes around and the same will happen here as well. 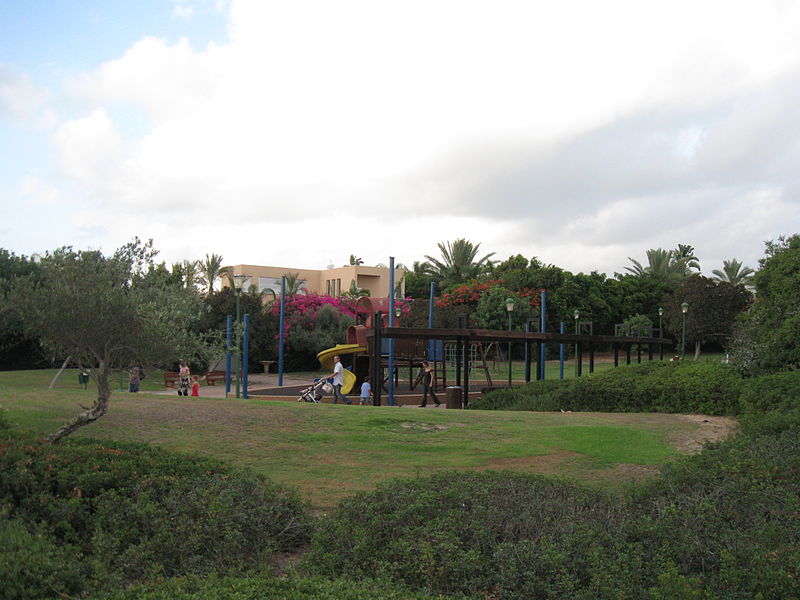 Modern Caesarea is one of Israels most upscale residential communities

Reflecting more precise local conditions, too, in many cases in the core Caesarea area one can find really expensive homes side by side with many older, and smaller, original homes- homes which are nevertheless still exceptionally well-located. Many of these will therefore ultimately be substantially upgraded during the next economic up-turn, as the demographics of ownership and relative views of desirability change within the different sub-divisions of the core. This is the nature of on-going, dynamic, economic development.

The double-dip international recession has meant it will take a little longer, as indeed does the domestic Israeli security preoccupation with dealing with Iran too, which is another pressing concern for all who live here and indeed throughout the country.