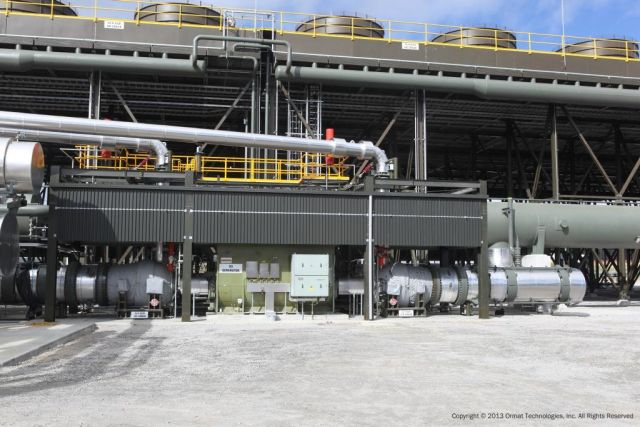 Mighty River Power’s modular Ngatamariki geothermal power plant is the largest singular binary power plant ever constructed. The Ormat Energy Converters are directly fed by a high temperature (380°F / 193 ºC) geothermal fluid. Until now, on such resources, only steam turbines or Geothermal Combined Cycle plants were used. In this configuration, 100% of the exploited geothermal fluid is reinjected with zero water consumption and low emissions, minimizing the impact on the environment with no depletion of the underground reservoir.

Ngatamariki was built in a record time of 24 months from the contract award. During commissioning, the power plant generated 150GWh and produced its first income stream for MRP.

Dr. Doug Heffernan, Mighty River Power’s CEO, said “the plant near Taupo was completed within the forecast and had proven performance above design specifications in testing over the past three months. We’re delighted with a project of this scale – the largest of its type in the world – to see it successfully completed, and with power output now expected to be 3MW (4%) higher than spec, which will be positive for the plant’s economics into the future. We also expect the project to come in slightly under the total cost forecast.”
Dr. Heffernan added” the new station would add close to 700 GWh of annual electricity production, equivalent to the electricity use of about 80, 000 households.”

Dita Bronicki, CEO of Ormat Technologies, said, “During the last 25 years, Ormat has installed in New Zealand approximately 350 MW in 14 power plants, 60% of the new geothermal capacity. We look forward to expanding our activity with our partners in New Zealand and share our accumulated knowledge and experience in future geothermal development in that county and around the world.”

With over four decades of experience, Ormat Technologies, Inc. is a leading geothermal company and the only vertically integrated company solely engaged in geothermal and recovered energy generation (REG). The company owns, operates, designs, manufactures and sells geothermal and REG power plants primarily based on the Ormat Energy Converter—a power generation unit that converts low-, medium- and high-temperature heat into electricity. With over 82 U.S. patents, Ormat’s power solutions have been refined and perfected under the most grueling environmental conditions. Ormat has over 500 employees in the United States and about 600 overseas. Ormat’s flexible, modular solutions for geothermal power and REG are ideal for the vast range of resource characteristics. The company has engineered, manufactured and constructed power plants, which it currently owns or has supplied to utilities and developers worldwide, totaling approximately 1600 MW of gross capacity. Ormat’s current generating portfolio of 595 MW (net) is spread globally in the U.S., Guatemala and Kenya.

In this article:New Zealand, Finance