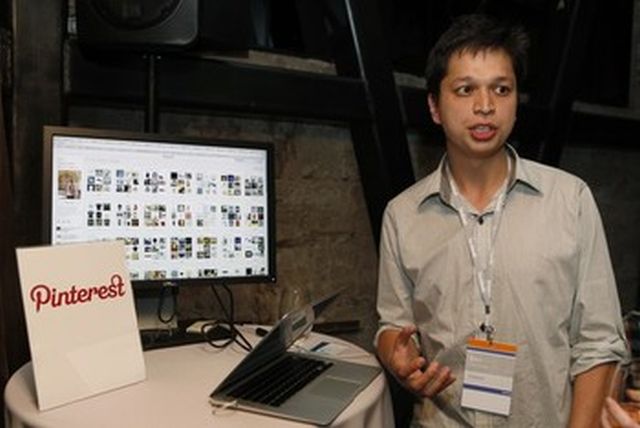 Silbermann who first launched Pinterest in March 2010 along with his co-founders Evan Sharp and Paul Sciarra has ushered his project through its every stages of development, watching it grows in many directions to be recognized as one of the most promising marketing platforms online. Now with the introduction of animation to Piniterest, Silbermann looks to see his company grow both in value and market penetration.

Ben Silbermann admits that when he and his cofounders first sat down to begin conceptualizing on what would grow to become Pinterest, they were aware that it would be a work in progress for some time.

Pinterest is best described as a virtual pinboard which allows its users to organize images, website links, recipes and a host of other categories in theme-based image collections which are known as “pinboards“. Ms. the doors to the site can readily can browse other pinboards for inspiration, and even ‘re-pin’ images to their own collections.

For example, recipe pins will show ingredients and how to make a great cake or a stew, products pins will show details in a variety of products or services all of them separated into subcategories [or  sub-pins] while movies pins would provide the details of all the latest movies as well as who features in them. As Pinterest has developed so have the number of pins that can be found on the site.

And since its early days, Pinterest has gone on to become a serious competitor for many of the web’s leading social media sites, largely due to its unusual approach to information gathering.

Now Silbermann, with the undoubted help of his new head of engineering, Jon Jenkins, has begun to gradually add animated pinning to enhance its pins, focusing initially on the highly popular recipe, movie and product sectors.

Jenkins joined Pinterest from Amazon, in the autumn of 2012 , bringing with him eight years of experience initially as a leader in their engineering department going on to become director with particular responsibility for develop tools, platform analysis as well as managing Amazon’s demands and intricate website platform.

According to Jenkins said the gradual addition of animation to the site will provide a double advantage, increasing people’s interest on Pinterest as well as being of considerable help to their content providers. For example, in pre- animation days, recipe pins were restricted to showing ingredients and instructions on how to prepare the recipe. Now thanks to animation, the recipe provider can also prepare a simple short film playing out the various steps in the cooking or baking process

Silbermann has admitted his excitement at the prospect of the way use of animation technology on Pinterest, which he sees being eventually applied to music, sports or any number of pins, with suggestions for new categories coming in all the time.

Whether by accident or design the Pinterest website has proven especially popular among the female population. According to statistics in the US alone during  2012, the female audience accessing the website made up for 70% of the total number of people who visited the site.

All in all, 2012 was a breakthrough year for Pinterest. It began in January 2012, when the site and I said they had not stopped 11.7 million visitors from the United States, making for the fastest site ever to break through the 10 million unique visitor mark in a single month. After that growth continues at an amazing rate rising by a staggering 85% from mid-January to mid-February although slowing down considerably with “only” 17% growth difficult for the period between mid-February to mid-March.

By the end of 2012 it was estimated that Pinterest had around 45 million users across the world, and by the middle of the year the figure was estimated to have risen by a further 25 million to reach a total of 70 million regular site visitors.

The most popular pin categories on Pinterest remain food & drink, women’s apparel, home decor, and travel although one of the most recent pins, DIY & crafts, has begun to attract a considerable following, showing that more males may be visiting the site [or more women may be taking up home improvement ].

Where Pinterest has appealed to the world of online commerce is that the site allows businesses, of every size and category, to easily and inexpensively create pages aimed at promoting their businesses online, in the form of a “virtual storefront”.

An indication of the social economic structure of the visitor average at Pinterest, is that a recent survey discovered that similar storefronts placed on Facebook and Pinterest so the average customer would spend more than twice on Pinterest than they were observed to do on Facebook.

In the retailing sector top-level companies such as The Gap, Chobani, Nordstrom and West Elm and known to use Pinterest both for advertising as well as a tool for providing online referrals. The Gap seems particularly “hot” on Pinterest, going as far as to develop their own themed pinboards.

Ben Silbermann admits how well aware he is that the company would not comment as far as they have and so fast without the support of his backers, with the first injection of capital coming in early 2011; with the company securing a $10 million financial injection by a group of investors led Bessemer Venture Partners. As the company was developing so fast, additional capital was soon required. That came in October of the same year from venture capitalists Andreessen Horowitz, who invested a secured $27 million, while valuing Pinterest at $200 million.

That proved to be a very worthwhile investment when in May 2012, Pinterest was estimated to be worth around $1.5 billion, rising to $2.5 billion by the early part of 2013, notes showing no signs of letting up.

Silbermann was born and raised in Des Moines, Iowa. After leaving high school Silbermann went on to attend the acclaimed Research Science Institute at MIT, later graduating from the University of  Yale  in 2003 with a degree in political science.

Before forming Pinterest, Silbermann spent some time in the sales operation at Google, where he admitted to not been remaining a “Google rat”  for too long before leaving to start his own company with a friend from college friend, Paul Sciarra, with the aim of developing iPhone apps. After some stopping and starting Pinterest began to evolve, and , at least according to Silbermann, is still evolving.