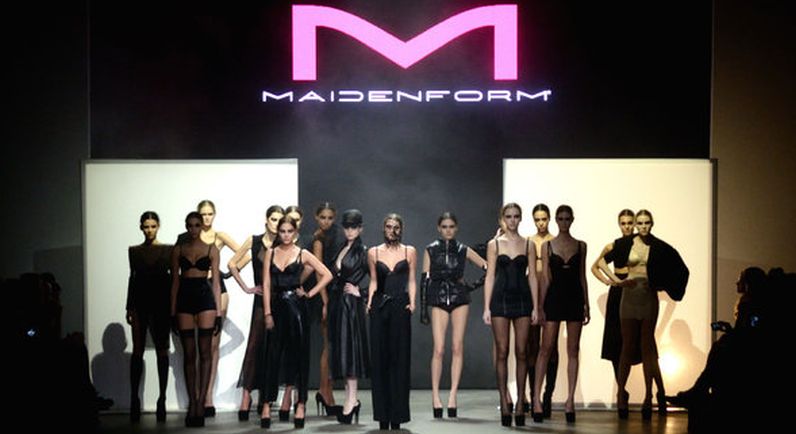 A Maidenform runway show at Amsterdam Fashion Week in January

With all of the thousands of obvious puns that can only be generated when two of the World’s largest producers of lady’s undergarments combine, with the takeover, HanesBrands is also picking up a major legacy of America’s industrial history with the purchase of the iconic brand, founded close to a century ago by the redoubtable Ida Rosenthal.

To the casual observer the news that broke this week that HanesBrands  have acquired internationally renowned female underwear maker Maidenform Brands for around $550 million might be taken lightly, for those who might be inclined to look a little below the surface they will discover a story that covers all aspects of American history, including immigration, industrialization and emancipation.

On the surface HanesBrands will be adding the traditional Maidenform Brands such as  Flexees and Self Expressions to their already impressive list of companies including Bali, Champion, Hanes, Playtex and Wonderbra.

In order to acquire the company HanesBrands have agreed to pay a 23% premium per share, taking them up from Tuesday’s closing price of $19.09 to $23.50.

A spokesperson for HanesBrands said after the deal was included that Maidenform’s range of bras will make for an ideal complement to their ranges. Particularly attractive to HanesBrands was the fact that they have a strong potential to lower production costs at Maidenform, who currently farm out production. However, now that they are under the HanesBrands’ umbrella they will be able to take advantage of considerable manufacturing facilities at the company’s disposal.

Maurice Reznik CEO of Maidenform explained that the takeover deal was particularly appealing due to the fact it provides the necessary infrastructure and resources to help the company grow its business.

It was smiles all round as both companies’ boards unanimously approved the acquisition, although it is still subject to approval from Maidenform shareholders. As, if expected, the deal is approved, it should be closed during the fourth quarter.

Maidenform Brands were founded in 1922 by seamstress Ida Rosenthal, her husband William and Enid Bissett, who owned the property in Bayonne, New Jersey where their first fashion store and workshop was located. Ida had come to live in America as an 18-year-old in 1914, following in the footsteps of her then fiancé, William.

Ida was a gifted seamstress, and the couple decided that they would go into business, renting premises from Enid Bissett and offering her a partnership in the company.

The Rothenthals has both talent and vision, and decided that they would try and reverse the fashion trend of the twenties, the Flapper look, which demanded that women appear to be practically flat chested, a look that did not appeal to the young women of New Jersey, mostly of Italian or Jewish origin, and generally fully figured.

The new store began to produce dresses to support that style of clientele and between them the Rothenthals came up with the idea to design dresses that would have its own “inbuilt” undergarments that would help to accentuate the natural form of a woman’s figure, a style development that the couple gave the name “Maidenform”.

William, who was more the designer and technician of the duo, is actually credited with inventing the modern brassiere, as well as becoming a modern day here by creating what still remains today, the standard dimensions for cup sizes.

Soon the demand for their dresses drew to fantastic proportions and it was not too long before the dress buying public of New Jersey was beating a path to their doors. After a while their clientele began to ask, albeit discreetly, if these brassieres could be purchased as a separate entity. The Rothenthals agreed, and soon the first Maiden Form brassieres were up for sale at $1 each.

Just three years after they opened their modest store in Bayonne, demand for Maiden Form (soon to be renamed Maidenform) had grown to such an extent that, the Rothenthals decided to concentrate on producing and marketing their line of brassieres, closing down the store to open a large factory in Bayonne, New Jersey to cope with the ever increasing demand, with their products being sold all over the East Coast of the USA.

To meet that demand, the Rothenthals hired dozens of sewing machine operators. However they soon reached the conclusion that that the traditional dressmaking methods that they couple grew up would never be capable of keeping up with the constant flow of orders.

To overcome the problem, the Rothenthals instituted new concepts that would allow them to mass-produce brassieres, instituting what became known as a section – work process, along the kind of assembly line that would have made even the late Henry Ford proud. Rothenthals ideas were away ahead of their time and are still used in what is known as the “the intimate apparel industry” today.

Maidenform has grown to become one of the top leading Shapewear brands in the USA, with an estimated over 40% of the market share, operating around 8, 000 in house stores in the US in such prestigious stores as Macy’s and JCP Penney as well as well as 75 in-house stores throughout the world.

Sadly William passed away in 1958. With his passing Ida moved upstairs to become the company president, leaving the company in control of her son-in-law Dr. Joseph Coleman and daughter Beatrice Rosenthal Coleman gained control of Maidenform and took it public in July 2005.

In 1966 Ida Rosenthal, suffered a major stroke that left her incapacitated until her death in 1973.