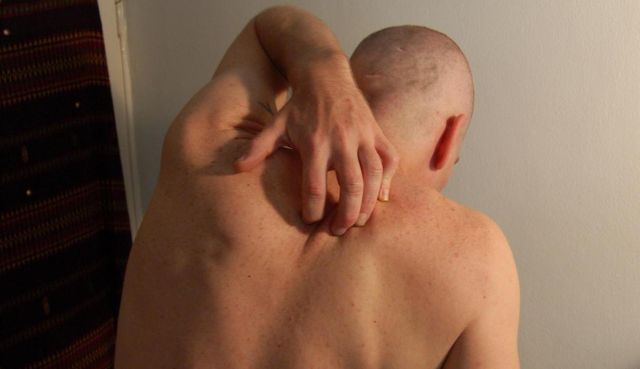 Ever had an itch you can’t scratch? It may not be the most serious of physical ailments, but it certainly counts among the most annoying ones!

Israeli and US scientists have now shown that some itchiness can be stopped by “silencing” the neurons that create the sensation. The results provide a basis for the development of novel therapeutic approaches for treatment of certain types of itching.

An itch is a complex and unpleasant sensation that in some respects resembles pain yet is different in terms of its intrinsic sensory quality and the urge to scratch. Though scratching is a natural defense mechanism of the human body, it can also damage the skin, especially with conditions that cause chronic itching.

Histaminergic (histamine in short) itching is brought on when histamine, an organic nitrogen compound involved in local immune responses (such as allergies) that acts as a neurotransmitter, triggers an inflammatory immune response to foreign agents. This occurs during hay fever for example.

Although some types of itches, such as hives, can be effectively treated with anti-histamine agents, the itch that accompanies most chronic itch-inducing diseases, such as eczema, is not predominantly induced by histamine. Therefore an understanding of the molecular and cellular mechanisms underlying the sensation of itchiness is essential for the development of effective and selective treatment.

Block the itch from reaching the brain

The study demonstrated the presence of distinct sets of neurons that detect and transmit itch-generating stimuli. The researchers were able to demonstrate that these neurons can be selectively targeted and silenced when they became active. This works for itching that is not induced by histamine like dry skin itch and allergic dermatitis.

The researchers found that primary itch-generating neurons that carry messages toward the central nervous system code functionally distinct histamine and non-histamine itch pathways that can be selectively blocked. This is the first time it has been demonstrated that it is possible to block itch signals in the neurons that mediate non-histamine itch.

The findings of the study were published in the journal Nature Neuroscience. These findings have a great clinical importance since they could be translated into novel, selective, and effective therapies for previously largely untreated dry itch and allergic dermatitis itch.

The research was a collaborative effort led by Doctor Alex Binshtok at Hebrew University’s Department of Medical Neurobiology, the Institute of Medical Research Israel-Canada, and the Edmond & Lily Safra Center for Brain Sciences; along with Doctor Clifford Woolf’s group at the Boston Children’s Hospital and Harvard Medical School. In addition to the senior researchers, student major contributors to the project were Sagi Gudes and Felix Blasl from the Hebrew University. From Harvard Medical School student contributors were David Roberson and Jared Sprague.