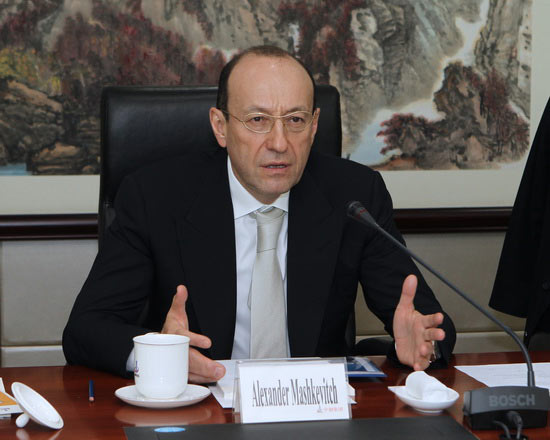 Eurasian Natural Resources (ENRC) is a Kazakhstan mining company listed on the London Stock Exchange. For quite some time it has been the subject of bitter shareholder disputes and board-room battles, some of which spilled over into the public domain, and all reminiscent more of the wild west than of the City of London.

Now subject to a privatization proposal from its three founding shareholders, Aleksander Mashkevich and his partners Alijan Ibragimov and Patokh Chodiev, their bid will be voted upon by shareholders in the coming month. It looks though as the deal will now likely pass as the Kazakhstan government which owns a blocking stake in the company through a company it controls, Kazakhmys also listed on the London Exchange, has recently announced it will support the bid. The company was first created six years ago as a public vehicle for the founders’ substantial chromium, alumina, and gas interests in Kazakhstan.

But just as calmer waters seemed to be in prospect for the mining company fresh turmoil has arisen in a suit filed by the company against one of its former non-executive directors, Sir Paul Judge, who, the company alleges, leaked confidential documents to the London media, specifically to the London Daily Telegraph.

In details of the suit made public on Friday ENRC is claiming unspecified damages against Sir Paul as well as issuing an injunction against him after claiming he was responsible for leaks relating to the bitter in-fighting on the company’s board. In a statement the same day, Gerhard Ammann, the chairman of ENRC, said the company was bringing legal action against Sir Paul in the interests of protecting shareholders.

“We have conducted thorough investigations into the malicious leaks which have damaged the company, its reputation and ultimately shareholder value.”
“Whilst these investigations continue, the company has an obligation to bring legal action where appropriate in order to protect the company’s information and stakeholders’ interests, ” Mr Ammann said.

Sir Paul said today he would “vigorously” defend himself against claims by ENRC, where he sat on the board for six years before leaving last month.
“If ENRC persists in the legal action then I look forward to the day when the High Court examines the full factual background to ENRC, its directors, shareholders and this misconceived claim, ” Sir Paul said in a statement. His lawyers are doubtless considering filing counter-claims against the company at this point if the legal hostilities continue to escalate.

Sir Paul also said: “I deny entirely that I played any role in that leak to The Daily Telegraph of my own October 5, 2012 email to fellow board members. “ENRC’s entire case on this point is based on nothing more than inference and lacks documentary or other evidence.”
Mr. Judge also said that ENRC filed the lawsuit the day after he stepped down from the board a month ago but didn’t notify him of the lawsuit until Friday.

There have also been significant allegations of corruption at the company, which the Serious Fraud Office (SFO) is now believed to be currently investigating, including investigating substantial payments to offshore accounts which may have been lacking in any clear business purpose. Sir Paul is indeed known to be co-operating with the SFO inquiry as a witness, and has been asked to provide relevant documents as part of the investigation.