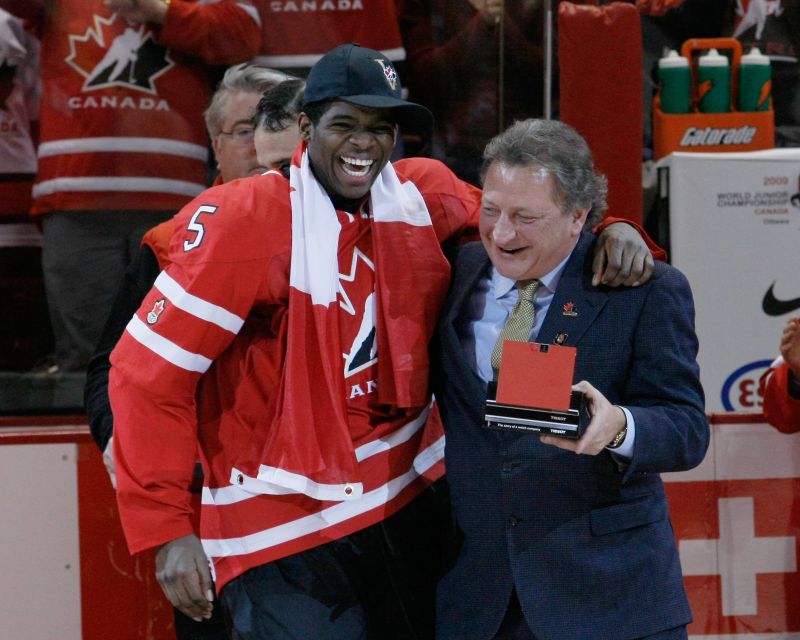 Melnyk made little attempt to hide his disappointment and his anger at the city councillors who blocked his plans to build a casino stating that it could mean the team losing the place of prominence in the national hockey league.

Ottawa born Eugene Melnyk, who owned the  city’s Senator ice hockey team for exactly a decade, buying them and the stadium out of bankruptcy, found himself facing up to a painful problem this week.

Melnyk, who has made little secret that in recent months that the Ottawa Senators have been suffering “substantial losses” largely due to high wage bills and lack of residual revenues. In a candid appeal to city councilors during a meeting of the finance and economic development committee, Melnyk put his cards on the table, explaining that if given the permission to open the gaming facility that he plans, it would allow a more positive cash flow and make it possible for the team to pay the high salaries that top ice hockey players now demand and that his team needs to be able to compete in the NHL.

However it appears that Melnyk’s appeals fell on deaf ears, with the owner of the Ottawa Senators admitting after the meeting that he has not run out of ideas for diversifying and therefore increasing his sporting organization’s revenues, now that city councilors have voted to rule out his proposal for a casino to be built in the grounds of the Senator’s Kanata stadium,  situated in the west end of the city.

With casino gaming legal in Canada, Melnyk must have been optimistic that his application would receive the necessary approval. However he was surprised to discover that the committee in charge of deciding locations for such venues had insisted that any new casino would be situated at the Rideau Carleton Raceway in the south of the city

Going into the meeting Melnyk was aware of the fact that there would be competition between his stadium venue and the Rideau Carleton Raceway had apparently spent a number of months preparing is dead bid for a casino to the provincial body responsible for gambling in the state, the Ontario Lottery and Gaming Corporation. (OLG)

With the body due to make the announcement later this summer, Melnyk clearly stated his displeasure at the councilor’s decision to choose only one venue for consideration pointing out, that “they would effectively be sole sourcing the casino decision by limiting prospective bids to just one location.”

In response Ottawa Mayor Jim Watson, who apparently was more interested in having the casino situated at the Raceway, reply to Melnyk by stating that the city is following the proper process, after representatives of the OLG had specifically requested that the Ottawa Council stipulate their preferred location. Mayor Watson went on to add that his preference to grant permission for the Raceway to open the casino was that it would go a long way in preserving the hundreds of full-time jobs the facility already provides.

To back up Mayor Watson’ s assertions, a spokesperson for the Ottawa Raceway stated that if the casino licence was not awarded to the facility it would effectively mean an end to the racetrack, which like Melnyk’s ice hockey team, doesn’t bring in enough money from staging the races.

Melnyk must by now being getting used to the city’s lack of support for his sporting business ventures, having previously had his request to open a soccer field adjacent to the site in Kanata where the Senators play. However the city councilors decided to grant permission for another venue for the stadium

Melnyk, according to his representatives, had put up a very strong case to have the casino situated within the grounds of the Kanata Stadium; one of them is that the team also hosts a large number of stages sporting events in the stadium, such as this year’s IIHF Women’s World Hockey Championships. Events that make Ottawa city an increasingly popular destination for tourists.

After the meeting Melnyk took considerable pains to point out that, despite the disappointing outcome, he fosters no plans to either sell the team and will not allow the  councillors’ decision to affect his ice hockey team activities in fostering goodwill on behalf of the city.

However , all may not be lost for Melnyk, as the motion is required to go before a meeting of the  full city council for final approval later this month, with many already claiming that Mayor Watson’s decision to opt for the racetrack venue, and especially the reasons that they gave for making that decision, could be interpreted as the council effectively subsidizing an institution that’s income is solely based around gambling.

Although making is home now in Barbados, Eugene Melnyk was born and raised in Toronto, Ontario, Melnyk came to prominence in the business world as the founder of the Biovail Corporation, a Canada -based pharmaceutical company that he successfully merged with the international Valeant Pharmaceutical company in 2010.

Currently rated as being the 75th most wealthy person in Canada with a net worth of $940 million, Eugene Melnyk also enjoys the distinction of being the richest resident of Barbados.

Advertisement. Scroll to continue reading.
In this article:Canada, Finance