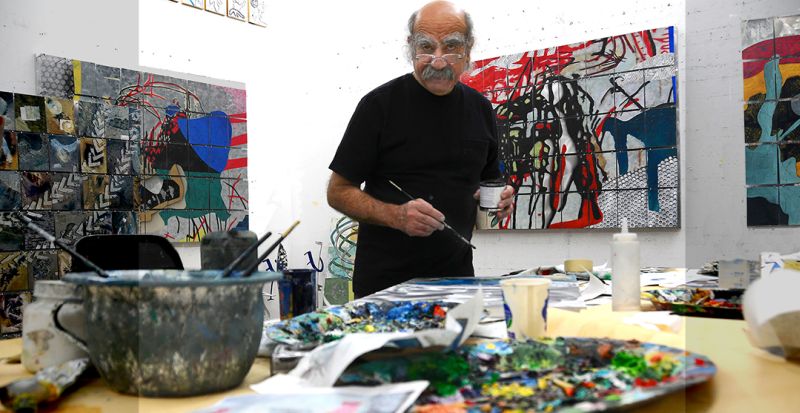 Zigi Ben-Haim’s exhibition in Berlin, Germany at the Schmalfuss Gallery, through August 3rd, 2013, exemplifies his pure search for identity. Building layer by layer or image by image, almost like “Curiosity Rover” on Mars, which Zigi celebrates in his recent work for NASA. It reflects Rover’s search in his new environment on Mars leaving his tracks behind… Zigi isn’t on Mars, not yet, he currently lives and works in SoHo, New York City. However, his multi-cultural background inspires his constant search for identity.

I was five years old when my family and I fled my birthplace of Baghdad, Iraq, and immigrated to Israel via Iran. It was in Tel-Aviv where I spent my adolescence and graduated from the Institute of Fine Arts in 1970.

Following a solo exhibition as a young artist, the America Israel Cultural Foundation awarded Zigi a scholarship to study abroad. He arrived in California and enrolled in the California College of Art in Oakland and San Francisco State University. After graduating and receiving his MFA, he set off for the East Coast and has been living and working in SoHo, New York City since 1975.

– How much influence your fellowships and excursions to places like Costa Rica, Russia, Venice, or Berlin have on your work?
Very much so. This may be the main reason I need to travel to new places discovering new cultures. I collect images and symbols that inspire me and become part of my vocabulary. The diversity of the fragments when they come together to create a dialogue and harmony in a new environment – my work. I see identity as the product of adaptation and the interconnectivity of culture. One can’t go forward without carrying his roots with him.

– How significant is it for you to have this show in Berlin?

I was in Berlin in 2005 through a fellowship from DAAD. During this very inspiring time, I created a visual diary titled, “90 Days of Berlin.” Everyday I created a drawing that embodied a special significance of the day. This group of drawings is now displayed as a part of the exhibition.

– I understand that this exhibition is a collaboration between two German galleries: Christine Rother from Weisbaden and Michael Schmalfuss from Berlin.
Yes, they decided to have a show of my work that gives the European public a look into the evolving Journey of my work in the past eight years.
Christine Rother had this to say: “Zigi creates a new world that exisits somewhere between abstraction and representation. His iconography builds a progressive fantastic diary on aluminum panels that constantly unveils itself. So are his images and dynamic spaces which often force viewers to examine their own personal relationships within atmosphere of urban experience, and global warming.” 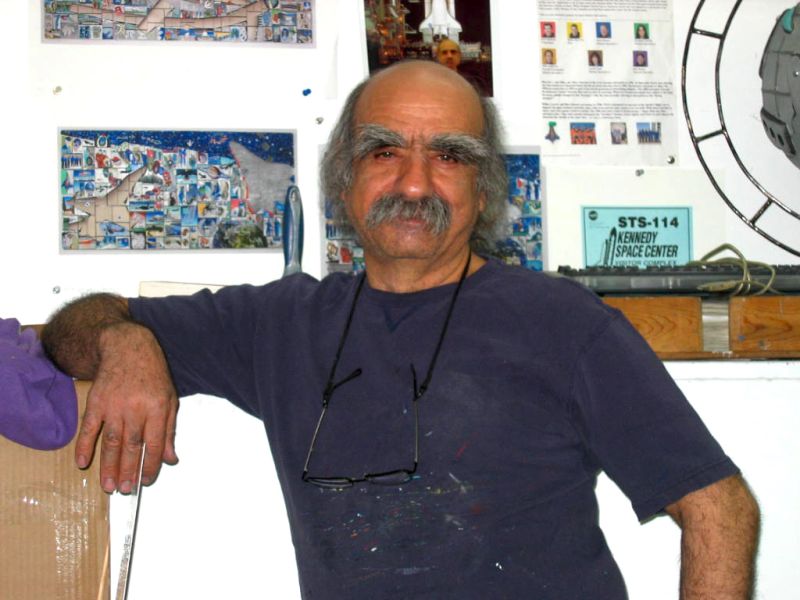 – What do you think of what she had to say?

I always prefer hearing people talk about my work and discover it for themselves, than me telling them about it.

– Is there a specific meaning for using wiremesh in your work like in several paintings in the show for instance: Looking Good, Hotspot, or A Place in the Sun?

Yes, the wiremesh parts are like negative spaces. They are hinting to what was but no longer there. Like footprints that exist in memory only. It happens to us constantly. Berlin embodies many memories. I experienced it recently in Berlin. One of the images that left an impression on me in 2005 was the recycled colourful containers spread everywhere in the city. When I returned in 2013, they were replaced with something less attractive but they do still exist in one of my drawings of “90 Days of Berlin” and became part of history and a very hot item in the show too. In the seventies, I created the negative space by tearing the ropes out from under the layers of newsprint and pattern paper that I collected from the streets of SoHo. The missing rope created that negative space that stayed in our memory.
– “90 Days of Berlin” drawings are covering an entire room in the gallery. How are they received by Berlin residents?

Ambassador Wolfgang Ischinger wrote in the exhibition catalog: “How many times have you had someone come to visit you in your home city or town during their peregrinations and in conversations afterwards they tell you about things that you, in your daily life, might have missed, taken for granted or glossed over. This is the case for me, a long time resident of Berlin, with the publication of a book by my friend Zigi Ben-Haim…”
You will be suprised how people look but they don’t see. Every day when I walk my dog, I discover in my own neighborhood things I never seen before, like sewer covers with an imprint on them: “Made in India.” These images fill our everyday lives although they’re not of really great significance but they do affect us in some way. When I place the images in my works suddenly people recognize them and discover them in a new way.

For Michael Schmalfuss exhibiting Zigi’s work for the first time …

– Zigi’s work is unique in its material, content and expression.

-In his work he reconciles the industrial with the natural, bringing the two together in his own way. He integrates traditional paints with industrial materials, layering them in order to create multiple dimensions of negative space.

– His creation of three-dimensional space invites the viewer to engage in the unique reality of the object. The use of both mobile and light-reflecting surfaces allows his work to interact with its environment.

– In many ways your paintings are like three dimensional sculptures, aluminum panels hanging on aluminum hooks.
Almost anything you look at today consists of a variety of details that are constantly in a process of change – moving or vanishing. I thought the best way to embody, understand, reflect, or preserve this characteristic of the object is by keeping it in motion – hanging. Like on a string in constant motion. I see my work as a tension of opposites, like a pull on a rubber band. And most of us live somewhere in the middle.