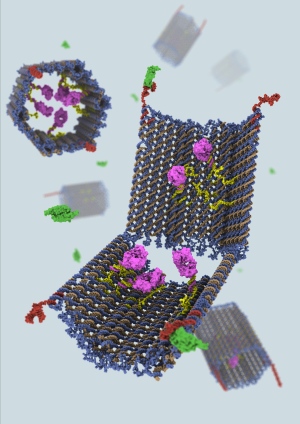 / By Gali Weinreb /
Billions of robots built from DNA can live inside a syringe, and can be injected into the body, where they carry out search and destroy missions as they interact with the body and with each other. They locate tumors, release medications at the right place and in the right dosage, link up with each other to create a bridge on which tissue can grow, and with the press of an external button, they can disappear. This isn’t science fiction, but applications of the nanobot technology developed by Dr. Ido Bachelet of Bar Ilan University.
Bachelet, a fresh acquisition from the Massachusetts Institute of Technology (MIT) under the reverse the brain drain program, says, “The pharmaceutical industry is constantly talking about better medicines, meaning medication which can be controlled. It’s a bit like talking about a better gun, which only kills bad people. What would happen if we could give the rifle to a soldier who is trained to shoot exactly at the right time?”
Speaking at the TEDMED Israel conference, organized by Adv. Yaron Eliram and Dr. Eitam Eliram, in April, Bachelet held up a syringe, and said, “Here are 100 billion tiny robots, 50 nanometers in length. They were created in my joint work with Prof. Shawn Douglas, but at the Bar Ilan laboratory, we worked to make them more stable and safer.”
How are nanometer robots produced? First, produce a DNA sequence of your choice, then replicate it using the origami DNA method. With this technique, a person can give orders to a computer to fold the DNA molecules as required. The result is, for example, a DNA sequence in the form of an oyster, whose pearl is medication, but the DNA includes a code that is activated when it comes into contact with particular materials in the body. For example, it is possible to ensure that the oyster receives a signal to change its shape and release the medication only when it encounters a tumor cell.
The molecules can also receive signals from each other. For example, it is possible to send two oysters, each of which has a different medication, both of which are essential, but are toxic when combined. Scientists can make sure that one oyster opens while the other stays closed.
“It is possible to ensure that there will be billions of molecules which react with each other. For example, it is possible to ask then to ‘count’, using chemicals, how many similar molecules are in their area, and then, when they reach a certain concentration, the oysters do not open. This protects the body from high concentrations of the drug, ” says Bachelet. He says that the processes of mutual signaling and counting give the accumulated robots the capabilities of a computer. “We create clusters of robots, which together operate the laws of logic at the level of an eight-kilobit computer, like the camcorder I had when I was a kid.”
In theory, these robots can change their shape in response to signals from the body and link up with each other. When they reach the area of a wound, they can link up to become a bridge over the wound and excrete growth factors to encourage healing.
Another possibility is to send these robots through the body to seek tissues with particular characteristics, such as tumors.
Miniature antennas
This is not all. It is possible to include with the nanometer-sized DNA molecule a miniature antenna. When the antenna receives a signal, it causes a tiny change in the molecule, telling it to open or close, self-destruct, or attach to another molecule. The signal is sent from a transmitter outside the body, and the process is remotely controlled via the Internet.
Bachelet’s nanobots can already carry out some of these interactions between each other, but what about interacting with the body? In the lab, Bachelet tests this on an unexpected lab animal – cockroaches.
“It is easy to work with them. You put them into the freezer for seven minutes, and they fall asleep. You inject the robots, thaw the cockroaches out, and they behave normally, ” says Bachelet. At this point, it is possible to see how and when the medication is excreted inside the cockroach, and it turns out that it is excreted where the researchers planned.
Published by www.globes-online.com