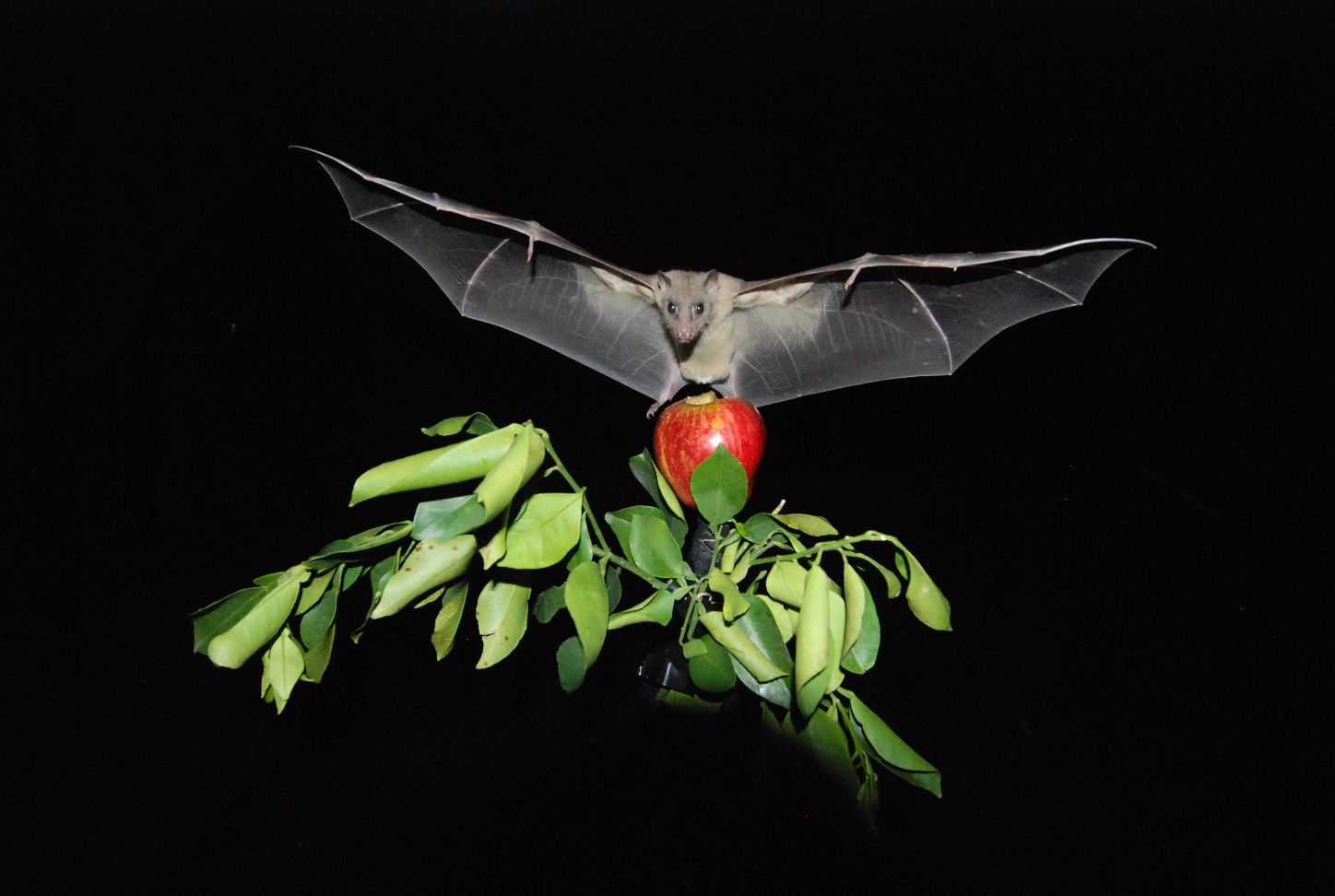 Animals navigate and orient themselves to survive – to find food and shelter or avoid predators, for example. Research conducted by Dr. Nachum Ulanovsky and research student Michael Yartsev of the Weizmann Institute’s Neurobiology Department, published today in Science, reveals for the first time how three-dimensional, volumetric, space is perceived in mammalian brains. The research was conducted using a unique, miniaturized neural-telemetry system developed especially for this task, which enabled the measurement of single brain cells during flight.

The question of how animals orient themselves in space has been extensively studied, but until now experiments were only conducted in two-dimensional settings. These have found, for instance, that orientation relies on “place cells” – neurons located in the hippocampus, a part of the brain involved in memory, especially spatial memory. Each place cell is responsible for a spatial area, and it sends an electrical signal when the animal is located in that area. Together, the place cells produce full representations of whole spatial environments. Unlike the laboratory experiments, however, the navigation of many animals in the real world, including humans, is carried out in three dimensions. But attempts to expand the scope of experiments from two to three dimensions had encountered difficulties.

One of the more famous efforts in this area was conducted by the University of Arizona and NASA, in which they launched rats into space (aboard a space shuttle). However, although the rats moved around in zero gravity, they ran along a set of straight, one-dimensional lines. Other experiments with three-dimensional projections onto two-dimensional surfaces did not manage to produce volumetric data, either. The conclusion was that in order to understand movement in three-dimensional, volumetric space, it is necessary to allow animals to move through all three dimensions – that is, to research animals in flight.

Ulanovsky chose to study the Egyptian fruit bat, a very common bat species in Israel. Because these are relatively large, the researchers were able to attach the wireless measuring system in a manner that did not restrict the bats’ movements.  Developing this sophisticated measuring system was a several-year effort. Ulanovsky, in cooperation with a US commercial company, created a wireless, lightweight (12 g, about 7% of the weight of the bat) device containing electrodes that measure the activity of individual neurons in the bat’s brain.

The next challenge the scientists faced was adapting the behavior of their bats to the needs of the experiment. Bats naturally fly toward their destination – for example, a fruit tree – in a straight line. In other words, their normal flight patterns are one-dimensional, while the experiment required their flights to fill a three-dimensional space.

The solution was to be found in a previous study in Ulanovsky’s group, which tracked wild fruit bats using miniature GPS devices. One of the discoveries was that when bats arrive at a fruit tree, they fly around it, utilizing the full volume of space surrounding the tree. To simulate this behavior in the laboratory – an artificial cave equipped with an array of bat-monitoring devices – the team installed an artificial “tree” made of metal bars and cups filled with fruit.

Measuring the activity of hippocampus neurons in the bats’ brains revealed that the representation of three-dimensional space is similar to that in two dimensions: Each place cell is responsible for identifying a particular spatial area in the “cave” and sends an electrical signal when the bat is located in that area. Together, the population of place cells provides full coverage of the cave – left and right, up and down.

A closer examination of the areas for which individual place cells are responsible provided an answer to a highly-debated question: Does the brain perceive the three dimensions of space as “equal, ” that is, does it sense the height axis in the same way as that of length or width? The findings suggest that each place cell responds to a spherical volume of space, i.e., the perception of all three dimensions is uniform. The researchers note that for those non-flying animals that essentially move in flat space, the different axes might not be perceived at the same resolution. It may be that such animals are naturally more sensitive to changes along the length and width axes than that of height. This question is of particular interest when it comes to humans because on the one hand, humans evolved from apes that moved in three-dimensional space when swinging from branch to branch, but on the other hand, modern, ground-dwelling humans generally navigate in two-dimensional space.

The findings provide new insights into some basic functions of the brain: navigation, spatial memory and spatial perception. To a large extent, this is due to the development of innovative technology that allowed the first glimpse into the brain of a flying animal. Ulanovsky believes that this trend, in which research is becoming more “natural, ” is the future wave of neuroscience. The neural basis of animal behavior will be investigated in laboratories that simulate natural conditions – or even on animals in their natural habitats, carrying out their normal, day-to-day activities.

The Weizmann Institute of Science in Rehovot, Israel, is one of the world’s top-ranking multidisciplinary research institutions. Noted for its wide-ranging exploration of the natural and exact sciences, the Institute is home to 2, 700 scientists, students, technicians and supporting staff. Institute research efforts include the search for new ways of fighting disease and hunger, examining leading questions in mathematics and computer science, probing the physics of matter and the universe, creating novel materials and developing new strategies for protecting the environment.