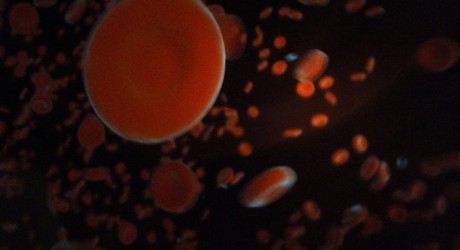 / By Noncamels team /
A tiny robot that swims around the circulatory system, detecting illnesses and treating them on the spot, sounds like something straight out of an overly imaginative sci-fi movie. But fiction might soon become reality as researchers from the Weizmann Institute in Israel are working on a medical “nanobot” and achieving promising results.

For such a robot to work, it would need to be smaller than a human cell, yet sophisticated enough to communicate with them. To achieve this, the researchers needed to create a computer that is based on the body’s own building blocks – DNA.

The Weizmann Institute scientists were able to create a genetic device that operates autonomously inside bacterial cells. Despite this being a major breakthrough, the researchers still have a way to go in order to apply this technology for nanobots that operate inside human cells, which are more complex than their bacterial counterparts.

Many diseases in the human body cause some genes to be modified inside the cells. The microscopic device “scans” the cell to see if all genes in it are expressed as they should be, since a malfunctioning molecule will cause a disruption in gene-expression. For instance, cells affected by cancer express a malfunction in genes related to cell-growth, causing them to expand rapidly and creating tumors.

The device is pre-programmed with information about the cell and if the information it finds inside the cell matches its programming, it creates a protein that emits green light. The researchers,  Prof. Ehud Shapiro and Dr. Tom Ran of the Biological Chemistry and Computer Science and Applied Mathematics Departments, say that in the future, the light emitting protein could be replaced with one that can cause cells to self-destruct if the cell is diagnosed as damaged.

The scientists genetically engineered four types of bacteria, which contain two genetic factors: one with both working properly, one with none working properly and two with one functioning and the other not. The test showed that the device only shone green when checking the bacteria with both functioning transcripts. Later, more elaborate devices were created that can check more complex transcripts.

The researchers’ next step is trying to use such bacteria inside the human body for medical purposes. That shouldn’t be a problem, since the human body contains about 10 times more bacterial cells than human ones. A step further would be to operate similar devices inside human cells, but that may take some time, since human cells are much more complex than bacterial ones.