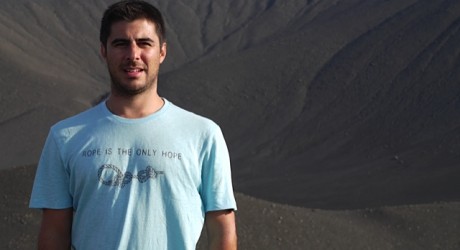 When Liad Agmon laid hands on his first computer at the age of five, it was love at first sight. At thirteen, he was earning money programming complex software. Twenty-odd years later, what started as puppy love has evolved into a successful career as an entrepreneur, investor, and lecturer.

Previously, Agmon was an advising entrepreneur-in-residence at Bessemer Venture Partners. Prior to joining Bessemer, Agmon was vice-president of new services and general manager of social commerce for Sears Holdings, which had acquired his startup, Delver, an intelligent social-search engine. Agmon’s first start-up, Onigma, a provider of enterprise data-security and protection solutions, was acquired by McAfee. Nowadays, Agmon teaches at the IDC in Herzliya and at Tel Aviv University, and has an exciting new startup called Dynamic Yield.

The prodigy-turned-businessman talks about what it takes to succeed; his concerns regarding the future of the “startup nation” and his love of mountain-hiking.

Tell us your background, in a nutshell.

When I was six or seven years old, my parents bought a Commodore 64 from a family friend, who gave me my first programming lessons, teaching me how to create a Piano program.I was born in California in 1977, to Israeli parents who were doing their advanced studies in US universities. We moved back to Israel in 1981 and soon after my dad brought home an Apple //c computer. It was love in first sight. It had a few very basic games, but I was hooked.

I’ve been earning money programming software since I was 13, so although I’m only 35 years old (for my students it sounds as old as eternity, but believe me it’s a young age), I have been working in the industry for more than 20 years.

What does it take to be a successful entrepreneur?

You need to be curious about the world, courageous, smart, and have a great ability to learn and listen: learn new industries; listen to customer requests; work in a dynamic environment which changes on a weekly basis.

There are many other essential skills: good salesmanship, good presentation skills, good leadership skills and great execution skills. Because no single person possesses all these skills, creating a company with a team of people you highly value and trust will greatly increase your chances of success. Entrepreneurship is a team game, not a solo adventure.

Why do you think Israel has become the “Startup Nation?”

There are quite a few factors: First and foremost, we Israelis are impatient people, who always look for shortcuts and better ways of doing things. We don’t like hierarchical systems, and many of us think we know better than our bosses. So, it’s very natural that we’ll come up with ideas that will eventually translate to new products, new technologies and new companies.

Another important element is the army – we take very bright young people, and let them work on very complex technological systems. The army is a system that is very relaxed with its R&D budgets and different constrains than for-profit tech companies, and because there is a high turn-around (very few people stay in the army more than the minimum period required), very young people serve in important roles with lots of responsibility.

The third element is an eco-system that has been created here since the late eighties, early nineties. Today, when a young entrepreneur has an idea, there are many people he can consult with; many potential investors who will be glad to back him should his idea prove good enough and a lot of collective knowledge that he can tap into in order to make his venture a success.

Tell us about your newest startup, Dynamic Yield.

Dynamic Yield is a company that specializes in helping premium online publishers (such as Ynet in Israel) to increase user engagement and generate higher revenues. We have developed a set of algorithms that learn user behavior patterns, and allow publishers to change site’s layout in real-time, per user. This increases the number of page-views users view in each session, and increases the number of ads users click on (which is critical for publishers’ revenues).

What is the best part about teaching?

I teach the main Entrepreneurship course at the Zell program at IDC, and an Entrepreneurship course at Tel-Aviv University’s MBA program. The best part about teaching is the interaction with the smart students in the class, who have the right passion and state-of-mind for becoming great achievers, and are seeking new tools and methodologies for achieving their goals.

What does a startup need to get investment? At Bessemer Venture Partners, what were you looking for?

What makes a startup desirable enough to invest in? The world of entrepreneurs is divided into two groups: entrepreneurs who have a very strong track record, who are industry experts and have already proved to be success stories (sold previous startups; are in very high positions in the corporate world), and the rest of the world. The first group will be able to raise money based on their previous successes and the credit they receive for knowing what they are doing. Only very few people have such a status. For 99 percent of entrepreneurs, the best (and probably only) way to raise money from smart investors is traction. That means ‘show us that customers are using your product, and that you have a solid plan detailing how to make your business profitable, and we’ll give you as much money as you need to grow and scale your business.’ Typically, investors today will not fund the R&D phase of a startup, but will be happy to fund its growth phase.

What strategies have you used in the past to secure investment?

I made investors believe in me, my team, the vision we brought to the table and our ability to execute it.

What are the steps to achieving an exit?

Don’t think about an exit. Build a company that will be profitable and successful by itself. At one point, one of the big companies operating in the space may show interest in acquiring your company, and you’ll have a nice payday. But this is a rare occasion that you shouldn’t count on. You must focus on building a company with sound economics, or most chances are you’ll go bankrupt much before any potential acquirer even pays attention to you.

Why doesn’t Israel have its own “Microsoft” or “Facebook”? Is the Israeli entrepreneurial mindset more focused on the buyout than on growth?

I can talk about this subject for hours, but I’ll add only one more point – as a young person in his twenties or thirties, when you are offered to sell your company for a price tag that makes you a millionaire – why not take the paycheck? How much money does one really need to be happy? A few millions of dollars in the bank are way more than enough! We have such companies – Checkpoint, Amdocs, Mellanox. Maybe they are not big as Microsoft or Facebook, but these are big, global, successful companies. I think it’s hard being a $100 billion company from Israel, because the biggest market is the US, and companies whose DNA is ingrained in their biggest target market have a higher chance of succeeding in becoming market dominant. In a similar way, [Barcelona Football Club striker] Messi probably wouldn’t have been the soccer legend he is today if he stayed in his little hometown and played in the local team. The US is the business center of the world, so it’s only natural that the big companies will happen there.

What do you think the Israeli startup scene will look like in 10 years, 20 years?

It’s of course very hard to predict, but I am not very optimistic. The innovation in the tech world has shifted from areas in which we had relative advantage – communication and security, ki to consumer devices, media and web. In these areas it is much harder to build companies out of Israel. Also, the rise of China and India as countries with massive talent pools and huge domestic markets will pose a threat to Israel in the long run.

The only way to stay on top of the game is to invest heavily in education, starting with kids at very early age – the critical age of kindergarten and elementary school, where curiosity, imagination and critical thinking are being developed. We need to provide kids with the best education system in the world, in order to make them smart teenagers, great university students and brilliant achievers later on.

Tell us something about yourself that people would be most surprised to learn about you.

I am a mountaineer at heart and being in high altitudes is a spiritual experience for me.