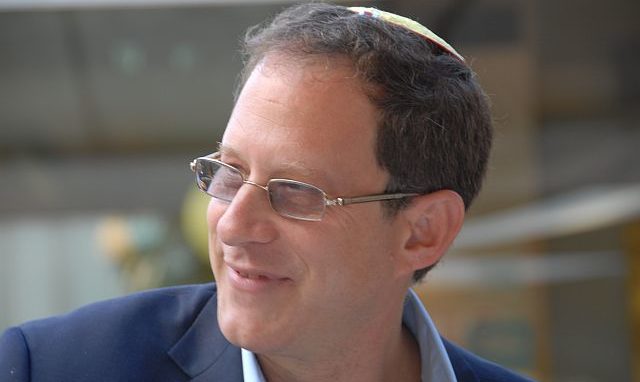 Yosef Abramowitz, 48, has a goal. He wants to raise $20 billion over the next seven years to invest in solar fields to bring inexpensive energy to 50 million residents of developing countries around the world. The boy from Boston is well on his way.

Abramowitz already has in his pocket promissory notes worth $800 million from international companies, commercial banks and the U.S.government designated for building solar fields in the Galapagos Islands, Romania, Rwanda, and 70 other countries where 80 more projects await him. He has a proven track record in the field – founding Arava Power, seven years ago, is now Israel’s leading solar-field builder.

The dream actually began seven years ago on the day Abramowitz, his wife Susan and their five children arrived at Ben-Gurion Airport in the summer of 2006.

After gathering their belongings, they set out on the four-hour journey to their new home at Kibbutz Ketura. Upon arriving, Abramowitz opened the car door to dizzying, merciless heat as temperatures in the Arava, in the southern part of the country, range from 35­­o-40o Celsius (95o-104o Fahrenheit) at that time of year.

“It felt as if the sun’s rays were burning into my skin. I assumed that with sunshine this strong they must have solar fields to produce electricity, ” says Abramowitz. “The next morning I went outside and saw the sun blazing over the Edom Mountains and asked someone where the solar fields were. The answer was that there weren’t any. I asked, `where are there solar fields?’ and the answer was `nowhere.’ There wasn’t a solar field in the entire country. No regulation on it had even been drafted.”

That was the situation despite the fact that Israel was and still is signatory to an international treaty obligating it to supply 10% of its electricity consumption from alternative energy.

“Germany reached the 20% goal in 2011 and they have nowhere near the sunshine that Israel has, ” says Abramowitz. “In 2006, Israel hadn’t even begun to look at the matter.”

That morning, Abramowitz decided to build Israel’s first solar field analogous to a person who’s lost his way in the desert, thirsty and hallucinating and wonders how it can be that no one had built a pipeline to bring water.

Israelis dismissed the initiative telling Abramowitz he was a “naive American” and that “It can’t be done.”  Those were exactly the kinds of words to galvanize him into action.

Two others joined Abramowitz on the bumpy road — Ed Hofland of Kibbutz Ketura and David Rosenblatt, a New Jersey businessman. Together, they founded Arava Power. Because no one in Israel believed in the project, they approached friends and family abroad, making four trips to raise capital.

“We had to coordinate between 24 government agencies and conduct 100 social, political and regulatory struggles in order to win, i.e., to create a new industry in the Israeli marketplace, ’’ Abramowitz says. “We figured it would take a year at most; it took five. Our victory was in signing the first agreement with Israel Electric Corporation to link up to the grid and supply solar energy.”

Arava Power’s agreement with Israel Electric includes an obligation on the part of the electricity provider to purchase every kilowatt produced by Arava Power for 20 years in exchange for a cost-of-living-linked tariff.

In addition, the license reeled in a large international strategic investor, Siemens, which invested $15 million in Arava Power.

The solar field at Ketura cost 100 million NIS ($25 million), of which 80% was funded by a loan from Bank Hapoalim. The resulting 18-month old field already supplies 4.95 megawatts of electricity to Israel’s national grid. Israel Electric supplies approximately 10, 000 megawatts to the whole of Israel.

Arava Power currently has plans for 40 more projects over the next three years representing 400 megawatts at an investment of $1.5 billion. Among the immediate projects in the pipeline are a solar field on Bedouin land in the Negev and a large solar field outside Eilat that will supply 40 megawatts, or a third of the city’s electricity consumption.

“It was not easy, ” admits Abramowitz. “I’ll never do anything like that again.”